It was on January 22 this year when Dr. Hideki Hasegawa a 40 year old Japanese national and medical professional working for a Japanese Aid Agency was killed on a notorious stretch of Rangoon-Naypyidaw Highway linking the old capital of Burma to the new capital Naypyidaw when his SUV travelling at a high speed overturned.

A Burmese official from the Railways Ministry was killed and another Japanese national was seriously injured also in the accident. Dr. Hasegawa was the driver of the Mitsubishi Pajero SUV the most popular SUV in Burma when the accident happened in the middle of the dark night.

Before that accident, the baby grandson of previous Rangoon Mayor Aung Thein Lin died in May 2010 after his parents’ car overturned on a similar stretch of same concrete highway.

The accident-prone Highway was opened in January 2009 and since then more than 150 serious accidents had occurred resulting 80 deaths of Burmese nationals and foreigners. Almost all of the tragic accidents with fatalities happened at the bends and the most vehicles involved were private family cars. Usually the authorities blamed the drivers for excessive speed and erratic driving behavior.

But the real culprit I believe is the brand new concrete highway itself and indirectly the economic sanctions imposed on Burma by the US-led Western Bloc. To understand that you need to know a Highway Engineering Term Superelevation.

Superelevation or Lack of It in Burmese Highways

Superelevation or SE is the amount of cross slope needed in a roadway that will allow a vehicle to safely travel at a given design speed around a curve without slipping sideways and suddenly leaving the road.

SE is expressed in a percentage or vertical distance drop per foot (or meter). An 8% SE represents a rate of slope equivalent to 0.08 feet (meter) drop per foot (meter) travelled.

In general SE rates are based upon the degree of curvature of the road and design speed of the road. The smaller the radius of the curve the higher the SE rate used by the road designer. Roads with high design speed also require a higher rate of SE.

For highway design SE rates range from flat to upward of 12% or more. SE rate of 4% are common in urban areas while rural high speed highways use 8%. Local Governments will most often dictate maximum SE rates based upon the classification of the road.

This simulated animation of a vehicle traveling on a properly-superelevated roadway from the Michigan Tech will explain perfectly about the highway superelevation.

Without Superelevation or enough Superelevation the bend or curve will push the vehicle traveling at high speed out off the curve and the driver will normally respond to the vehicle slipping off sideways and leaving the road by turning back the steering wheel to the left.

And that correcting action always overcompensates and the result often is the car overturning  on the driver side or even rolling and killing the driver like in the case of Dr. Hideki Hasegawa.

Just look at the photo of a typical bend on the Rangoon-Nyapyidaw Highway and you will notice the complete lack of Superelevation on that bloody highway and that is the main cause of serious accidents on that highway.

So why are Burmese still building these inferior and extremely dangerous highways? The answer obviously is the apparent lack of highway-building technology.

Because of past socialist-non-aligned self-isolation and current western-world sanctions Burma obviously has no modern technology especially in the concrete technology to build sufficiently-good highways. Just 30 years ago in the 1980s when I was working for Burma Irrigation most dams built in Burma were earthen dams.

So my question is how does Burma’s neighbors like Thailand achieve that very important technology to build the concrete structures like dams and highways?

The answer is quiet simple. They get the technologies from the West through joint-ventures. The perfect example is the biggest Civil and Infrastructure Construction and Development Company in Thailand, ItalThai Group, building airports, railways, and major highways. 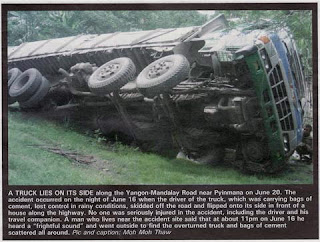 Now the Italian-Thai Development PLC is developing massive 8 billion dollars Tavoy Deep-sea Port Project in Southern Burma. The Italian-Thai was started in 1954 as a joint venture between a Thai Company and an Italian Company.

Will Burma get a chance like that to develop her companies to such success? So far not yet, as the western world’s sanctions wouldn’t allow it. Just look at Max Myanmar the biggest Burmese construction company building infrastructure like highways in Burma. Its Managing Director Zaw Zaw is in the list of Burmese undesirables even barred from entering many developed countries let alone establish the business ventures with the companies there.

As long as these brutal sanctions have been kept against Burma, poor and backward Burmese companies will still have to continue building inferior highways themselves and these unsafe highways will still keep killing the families driving on them as if they are Sanctions’ Silent Assassins doing what their masters, US-led Western Countries, have really wanted all along.