The present Constitution of Union of Burma does not have acts that are sufficiently adequate to provide genuine equality to the States and Ethnic Minorities.

This Guiding Council (for amending the Constitution of Union of Burma – Shan States Affairs) has unanimously agreed to demand to rewrite the present Constitution so that every State and Ethnic Group is treated equally as part of a genuine Federal Union.

(1)       To reorganize Burma Proper as the Burman State (like any other State).

(2)       To provide equal power to both houses of the Union Parliament.

(3)      Every State has equal number of representatives to the Nationalities House (Lu-myo-zu Hluttaw) of    the Union Parliament.

(4)     Central Union must have only the following departments and the rest of the powers and the  opportunities are to be transferred to each State.

Above demands have been unanimously agreed and decided by this Guiding Council (for amending the Constitution of Union of Burma – Shan States Affairs) on the date of 24 January 1961.

The members of the Guiding Council (for amending the Constitution of Union of Burma – Shan States Affairs) are as follows.


What power-hungry Shan Sawbwars didn’t really understand at all was that Burma was not formed and established by a few groups of settlers or convicts just recently like in Americas or Australia. Every settlers was newcomers in these so-called new colonies in the America and Australia and so they all had to agree a federation based on what Shans called The Genuine Equality. (Of course only after they had exterminated the native populace like red-Indians in Americas and Aboriginals in Australia in massive genocides.)

And all these new colonies became the equal States of the new federations whether it be the United States of America or the Commonwealth of Australia.

Burmese will never accept that for Burma as Burma had been slowly and painstakingly established on the bloods and guts of our ancestors shed fighting countless wars for thousands of years to lay the claim on this land. Burmese together with other ethnic races as a whole unified people have what Australians legally called The Native Title to this whole land called Burma.

The individual races cannot claim that Native Title on their little enclaves as these races do not exclusively occupy their land since other races and mixed-races have been living there all along together with them.

That’s why Americans and Chinese think really hard before they will decide to invade Burma for the so-called oppressed minorities. 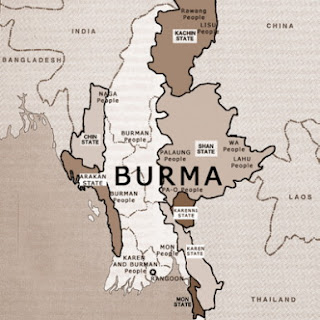 Burma nowadays is racially not that divided like during the old-imperial or even the British-colonial periods. The clear example is Irrawaddy Division which used to be a Mon-majority with a few Burmese and Karen minority. But it is now occupied by people who just called themselves Burmese.

Like most people in this racial melting pot called Burma, I am a racial mix of Mon, Burmese, and Shan but I consider myself a Burmese. Like Americans or Australians (who have basically abandoned their original races like English or Irish or Scottish, and happily taken new racial identity of American or Australian) why don’t we just call ourselves Burmese (not fucking Myanmar-eeeese) and be done with it?

(Similar to what Thais have been doing successfully for last few centuries now! The Shans in Thailand nowadays do not even remember the Shan rebellions raging there just last century.)

So instead of reorganizing all seven Divisions of Burma Proper into the new Burman State (as demanded by the Shans in their Federal Mu) we should just abolish the fucking States and reorganize them into the administrative Divisions like in Burma Proper.

So there will be 14 Administrative Divisions, instead of present 7 Divisions and 7 States, as proposed in the following list.

It will definitely kill the civil war and any future ethnic conflicts in long term. Thais did it long time ago in Thailand and even the Shans or Karens or Mons living in Thailand for many centuries have totally stopped asking their own little enclaves there. Of course except the Musulamens living down South by the Malaysian border as they hate to live together with the Buddhists majority.