(Electricity generation, prices, and subsidies in backwater Arakan State.)
The ninth day of first Pyithu Hluttaw (Lower House) was devoted for another question and answer session. The session began at 10 in the morning and ended at 45 minutes past 1 in the afternoon.
Out of six questions that day the most interesting question was asked by Ye Htun from Arakan State Sandoway (Than-dwe) Constituency. He question was about the exorbitant electricity rates being charged on the people of Arakan State. And the Minister for No. 2 Electric Energy ex-Major-General Khin Maung Myint answered the tricky question. 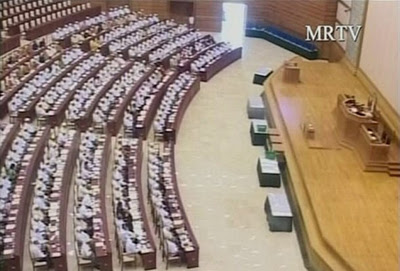 Ye Htun from the pro-junta USDP (Union Solidarity and Development Party) first stated that since 2003 the electricity generation and distribution in the Arakan has been implemented township wise by the Township Electricity Committees. Right now a unit of electricity (a kilowatt-hour) is costing the people of Arakan State from 400 to 1,000 Kyats depending on where they live.
But, he added scornfully, all the Government facilities in the State are being charged a much cheaper governmental rate and it basically means that ordinary people are heavily subsidizing the governmental usage of electricity since people have to bear the actual total cost of electricity generation and distribution in the State and ended up paying much higher electricity rates for their own domestic and industrial usages.
What Ye Htun cleverly implying was that the poor people of his state are being forced to pay for the electricity used by the military installations and other government departments in the State. And most of the government facilities in the Arakan State are the major army bases and countless number of battalion-sized army posts to guard the ongoing construction of massive China’s Trans-Burma oil and gas pipelines and Maday Deep Sea Port near Kyauk-phyu.

So he asked if the Government has any future plan to lower down the electricity rates to the levels of other States and Divisions and if they have please let the Parliament know how and when.
Electricity by Diesel-Engine Generators
In replying the question the minister Khin Maung Myint first introduced the fact that the Arakan State has no centralized power generating facilities and no connectability to the nationwide electricity supply grid (because of the Yakhine Yoma Range between the State and Proper Burma). So, he added, only two hours a day power is now being generated by 100 diesel-engine-driven generators in the State because of the high cost of imported Diesel fuel.
Including the State Capital Sit-tway (Akyab) and three District Towns Than-dwe, Kyauk-phyu, and Maung-daw all 28 towns in the State have their own diesel generators managed by the electrical engineering offices from his Ministry.
In the fiscal year 2010-11, he explained, these generators used 355,080 gallons of Diesel fuel costing the Union Government 434.28 million kyats. Together with the maintenance cost and the salaries and wages of the employees his Ministry spent total 1776.72 million Kyats to supply electricity in the Arakan State.
At present the people from thirteen small and median towns (Ya-thay-taung, Maung-daw, Bu-thee-taung, Kyee-gan-pyin, Taung-pyo-let-wae, Kyain-gyaung, Ann, Ma-ee, Kyain-da-li, Pauk-taw, Plat-wa, Ponna-gyun, and Myay-bon) receiving daily 2 hours of power generated by the State-supplied Diesel fuel are being charged (per unit of electricity) only 25 kyats for domestic use and 50 kyats for industrial use.
Government Subsidies for 2 hours/day Electricity
Since one gallon of Diesel cost about 3,000 kyats and produces 10 units of electricity with the distribution cost of 19 kyats per unit, the Minister told the Parliament, it cost 319 kyats to generate and distribute a unit of electricity in Arakan State and the Government has been heavily subsidizing the electricity supply in the State. He estimated that the electricity subsidy for the Arakan is 453.60 million kyats total in the fiscal year 2010-11.
However, the Minister added, the people from ten major towns (Sit-tway, Kyauk-phyu, Than-dwe, Myauk-oo, Kyauk-taw, Min-byar, Ramree, Man-aung, Taung-goke, and Gwa) have been receiving 4 to 7 hours per day of electricity by supplying their own diesel fuel to the Government-owned generators in addition to the Government-supplied diesel fuel.
For that particular purpose the people have formed Township Electricity Committees and these Committees collect, depending on the township wise cost of electricity generation and distribution, between 400 and 600 kyats per unit of electricity consumed in their respective townships.
Current rates are 400 kyats in Sit-tway, Kyauk-phyu, Myauk-oo, Man-aung, and Taung-goke and 500 kyats in Kyauk-taw, Min-byar, and Ramree and 550 kyats in Gwa and 600 kyats in Than-dwe. The Minister emphasized that there is not a town charging up to a thousand kyats rate as Ye Htun mentioned. Based on the 319 kyats actual cost for one unit of electricity, the Minister also justified, these rates are suitable price of electricity in a remote state like Arakan.

The minister also reported that with the completion of 110 megawatt Tha-htay-chaung hydroelectric project in Than-dwe Township and 76 megawatt Sai-din hydroelectric project in Bu-thee-taung Township the Arakan State would have access to the national electricity grid in near future and the people would be charged, as with the rest of Burma, the same low electricity rates of 25 kyats per unit for domestic use and 50 kyats per unit for industrial use.
He then pointed the fact that his Ministry collected only 84.69 billion kyats for total 2.55 billion units of electricity generated and distributed nationwide last financial year. So the average revenue per unit of electricity is only 33 kyats. Out of it his No. 2 Electric Energy Ministry (The retail distributor) has to pay the No.1 Electric Energy Ministry (The main electricity generator) 20 kyats per unit and his ministry is left with only 0.63 kyats per unit after taking out all other cost of distribution.
The Minister concluded his long reply to Ye Htun’s question (without touching the sensitive topic of people of Arakan State heavily subsidizing the army consuming the lion share of electricity generated in their State) by stating that little revenue left was sacrificed by his Ministry as the subsidies for supplying 2 hours per day electricity to the people of Arakan State.
Speaker’s Unexpected Intervention
The Speaker of the Lower House Shwe Mann, officially the Chairman of the Pyithu Hluttaw, then unexpectedly intervened by saying that in the original question the honorable Member for Sandoway did clearly state the fact that the people of Arakan State has been sharing the cost of electricity used by the Government Departments since these Departments are being charged a cheaper rate.
So in his opinion the respective Ministers involved should examine the case and report the facts to the Parliament. This is what the pro-SPDC junta blog Padauk-myay commented about the Speaker’s injection.
Many members of Parliament saw Speaker’s unexpected remark as a serious improvement in the semi-democratic Parliament. They all knew that the Government Departments in Ye Htun’s question is clearly the military and even though the Minister Khin Maung Myint had deliberately avoided that dangerous issue the Speaker Shwe Mann reminded him not to.

Semi Democracy Burmese Style (1)
Posted by Hla Oo at 6:02 AM