(Translation of CPB UG’s Pho Than Gyaung’s Article from Maya Magazine.)
Since I ran away from home my sole purpose was to take to the jungle as a Communist revolutionary. But even after nearly nine long months in the jungle I was still in the Government-controlled territory.
We were then hiding in a place in Southern Shan State after leaving the Indigo Mountain region. We might have been there at least three or four months. Then one day a young comrade who was on an Underground (UG) duty arrived and told us that we would soon be taken to the Party’s stronghold.
I immediately left our hiding place with others as if my mother had called me to come back home. Me, Taw Win, the UG comrade, and the driver in a Datsun pickup.
Our destination was the 108 War-region of Communist party of Burma (CPB). To get there we had to go through the towns of Ba-htoo and Kyauk-gu.  Our guide was in the cabin while we two were in the open back of the pickup truck.
No body talked and the scenery of the temperate surrounds was dried but picturesque pretty.
Crossing Thazi-Shwenyaung Rail Line 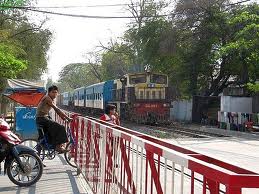 After over an hour on the road we hit the rail track between Thazi in Burma Proper and Shwe-nyaung in Shan Plateau. A train was coming and the crossing was already closed. There were other vehicles before us waiting too.
As our car was near them we noticed a truck carrying an elephant dance troupe. On the back of elephant in the poster on the sides of the truck was Yadanar Min the name of the troupe. That could be a trouble as that Yadanar Min Troupe was from Ta-mar-kone in Mandalay where my parents lived.
(Translator’s notes: Pho Than Gyaung’s parents were late Ludu U Hla and Daw Ah Mar the famous writers and the journalists and the owners of Ludu Newspaper and Magazine and Publishing House.)
These people from the troupe had been coming to my parents’ house for so many years. Just last year my parents even arranged for them to entertain U Ne Win (Burmese dictator General Ne Win) at Thiri-pyit-sayar State Guesthouse in Pagan. My parents had previously told Ne Win about them and Ne Win wanted to see the troup perform.
We’d be in a real trouble if there were people who recognized us on their truck. Ko Taw Win also had many friends and acquaintances in their Ward, Ta-mar-kone. So we just kept our heads low at the Crossing.
Ba-htoo Town and then the Kyauk-gu Bazaar
When we reached Ba-htoo Town it was already sunset. We just stayed at where they put us and ate what they fed us and slept where they laid our beds. We were to leave Ba-htoo very early next day for the Kyauk-gu Bazaar and then continued on to our destination together with people waiting for us there at the Bazaar.
Since Kyuak-gu Market was a weekly or monthly country Bazaar people came early and left early too. So we got up very early next day and went to Kyunk-gu on a three-ton Bazzar-Truck carrying 40-50 market goers.
As the market was closing down we were taken on an ox-cart to a village together with the villagers going back home from the bazaar. We went through a huge forest filled with giant teak and In trees. All sorts of birds were singing and it was so pleasant I could write a poem if I was capable of writing one.
On the cart we couldn’t understand the Danu or Shan languages our traveling companions were using and we didn’t dare to use our Burmese to them as we were trying to hide our Burmese origin. So we just sat quietly taking in the beauty of the forest and pleasant birds’ songs all the way to their village.
In A Communist-sympathizer Village 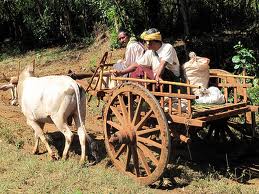 At about 3 or 4 in the afternoon we reached the village and we had to get off the cart. As the unwritten rules we didn’t ask the name of the village and also the names of our guides and the people receiving us. We just departed while saying thanks to them only with our eyes.
We had to wait inside a house in the village. Like anywhere else in Burma the house was on the stilts and thatch-roofed and split-bamboo-mesh walled. Many houses in the village were timber-plank walled.
Early evening we had our dinner together with the host family without saying a word at all. At night they sat by the fire at the middle of the house and chatted. Only among themselves not with us. About seven old and young men came up to house and sat together with our hosts and joined the chat circle.
It might be their tradition. But nobody said nothing to us. They didn’t even seem curious about us two sitting back leaning against the back wall in complete silence. Maybe they were so well used to cases like us the clandestine travelers or the young men taking to the jungle.
Day slowly turned night and the villagers came and went and their chat circle was still alive. Then at about 8, I thought, two youths with rifles on their shoulders came up to the house and sat beside the villagers.
They whispered to our host and the owner of the house sort of pointed them to us with his chin. And our host sort of stared at us and nodded his head as if he was saying that two youths were the ones we were waiting for.
We immediately stood up and bowed to the villagers respectfully with our smiles and quickly followed the two armed-men out of the house.
We are at Home with the Party 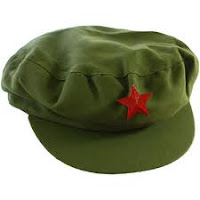 Outside, soft moonlight had blanketed the surrounds. Not fully bright like under a full moon. It wasn’t a full moon night. But we could see each other clearly under the pale moon light. Once out of the village we were right into the woods.
We walked comfortably along a narrow trail as they led us into the woods. And about half and hour later we suddenly noticed 7 or 8 armed men sitting and waiting for us just beside the trail. Unlike in the novels and the movies we didn’t hear any signals or whatever sounds between them and our guides.
We immediately sat down there and introduced and hand-shook each others. The leader of the welcoming party was the District Committee Member of CPB 108 War-region Ye Baw (U) Thaung Tin. He was over 50 and most called him Uncle Thaung. Two youths who led us there were Yebaw Win Aung and Yebaw Hla Tint.

While we were talking to them I couldn’t keep my admiring eyes away from the red stars on their caps and the rifles in their hands.  Uncle Thaung had noticed it and he smiled at me and took off his cap and gave me the cap. He then took one M-23 Chinese rifle from one of his men and gave it to me.
Even in the pale moon light both red star and rifle were shinning and I had a very strange feeling then.
I have taken to the jungle. Now I am an insurgent, sorry, an armed-revolutionary!
**************************

(Pho Than Gyaung was born in Mandalay on 24 July 1945 and attended Mandalay University from 1960. In 1963 he was expelled from the University for his involvement in underground student movements.
He was then the General Secretary of Central Student Union (ba-ka-tha) and the Joint General Secretary of Mandalay University All Students United Front. He was arrested by Ne Win’s military Government in July 1964 and sent to Ko-ko penal island in 1969. He was released from prison only in 1972. In August 1976 he fled from a MIS raid at his parents' house and reached the 108 War-region of CPB  (ba-ka-pa) nine months later.

He is now the spoke-person for Communist Party of Burma in China’s Yunan Province. He is also the Cyber Warrior  actively running CPB-controlled sites and supporting the CPB-affiliated sites on WWW.)
Posted by Hla Oo at 11:45 PM