(This post is direct from the International Observatory on Statelessness.)
For many years, Bangladesh has hosted several stateless populations, including the Urdu-speaking minority (also known as the Biharis or “stranded Pakistanis”), Rohingya refugees (the returnees from Burma’s Arrakan), and individuals of Indian origin. In 2008, the High Court provided a remedy for many of the Biharis.
For 37 years, at least 200,000 and as many as 500,000 Urdu speakers have lived in urban camps throughout Bangladesh, where they have suffered discrimination, demographic stress, poor conditions, and lack of basic amenities.
The Urdu Speaking Biharis (500,000 Muslims)
They were a Muslim minority living in the majority Hindu regions (including Bihar) in pre-independence India. With the break-up of India in 1947, a large group fled to East Pakistan and became a linguistic minority among the majority Bengali speaking inhabitants. They were full citizens of Pakistan until 1971, when the Bengali majority in East Pakistan pushed for secession from the Pakistani state, giving birth to an independent Bangladesh. 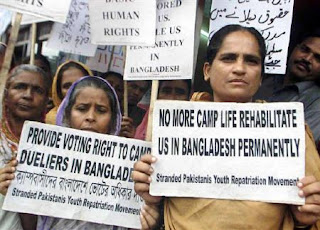 During Bangladesh’s struggle for independence, the Bihari sided with West Pakistan. They were abandoned by Pakistan upon Bangladesh’s independence, as Pakistan argued that a mass influx of this minority would destabilize an already fragile and culturally mixed population. Bangladesh, on the other hand, scorned them for supporting the enemy.
With neither country offering citizenship, the Urdu-speaking minority became citizens of nowhere. In May 2008, the Bangladesh High Court held that any Urdu speaker born in Bangladesh, or whose father or grandfather was born in Bangladesh, and who was a permanent resident in 1971 or who has permanently resided in Bangladesh since 1971 is a citizen “by operation of law.” This essentially confirmed the citizenship of most members of this community. Persons who affirm or acknowledge allegiance to a foreign state (such as Pakistan) may be disqualified.
The Bengali Speaking Rohingyas (250,000 Muslims) 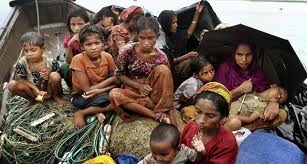 There are approximately 28,000 Rohingya from Burma living as recognized refugees in camps in southern Bangladesh, dependent on the UN and the international community. An estimated 200,000 other Rohingya live illegally outside the camps.
Burmese discrimination toward its Rohingya Muslim population culminated in the enactment of the Citizenship Law of 1982, in which they were declared “non-national” or “foreign residents.” Burma insists they are Bangladeshi, and Bangladesh that they are Burmese.
There were two waves of Rohingya expulsions from Burma to Bangladesh. The first occurred in 1978, and the second in 1991-1992. Around 250,000 Rohingya crossed into the Chittagong area of Bangladesh.
Although many were repatriated involuntarily to Burma, some returned along with new groups fleeing persecution and harsh taxation. Those living in Bangladesh contend with severe poverty and strained relations with the local community. Migration of Rohingya from Burma is continuing, though many now choose to try to go to Malaysia by sea rather than seeking refuge in Bangladesh.

(During 1942 British sudden-withdrawal from Burma the Ah-le-than-gyaw Yakhine village of over 200 households was totally wiped out by the British-supported V-Force of Bengalis. That massacre started the notorious 1942 Bengali-Yakhine riots during which over 30,000 native Yakhines were slaughtered by the British-armed Bengalis, and all Yakhine farmlands and villages in Maungdaw area had since been taken over by the illegal Bengalis. Now UNHCR is so concerned about the welfare of their Bengali-Muslims they classified that Bengali-Muslim (formerly Yakhine-Buddhist) village of over 1,000 households as a Village of Interest.)
The Hindi Speaking Indians (200,000 Hindus)
Nearly 200,000 people living in Indian enclaves along the Bangladeshi border have no voting rights because of a dispute between the two countries over carrying out a census there. Many residents feel they are stateless and belong to neither country. They say they risk their lives if they try to cross over into India, and are often harassed by the security forces of both countries.
Posted by Hla Oo at 1:43 PM