Aus Sending Rohingya-Bangladeshis Back To Indonesia

(News article and photos direct from BARE-NAKED-ISLAM on February 3, 2014.)

AUSTRALIA has a hot new fleet of bright orange lifeboats which will be used to send Muslim asylum seekers back to Indonesia and beyond.


A group of Bangladeshi asylum seekers heading for Christmas Island say they were tricked by the Australian navy and told they would be taken to Christmas Island. But they were transported back towards Indonesia, and left on a small lifeboat-style vessel close to the Indonesian shore. Oh, Boo Hoo!

Good on Yer, our conservative PM Tony Abbott, for sending the illegal alien Muslim invaders back in style on an air-conditioned, unsinkable 90-seat lifeboat, filled with enough food and water for the trip, and accompanied by an armed escort to make sure they get there.


The arrival of the first lifeboat capsule in Java has sent shockwaves though the illegal people-smuggler and asylum seeker networks and especially Indonesian authorities who are profiting enormously from actively helping the people-smugglers sending thousands and thousands of Boat-Muslims riding rickety Indonesian fishing-boats to Australia.
Bright Orange Lifeboat Capsules Made in Singapore

This is what awaits asylum-seekers trying to get to Australia on dodgy wooden smuggling boats – the gift of an air-conditioned, 90-seat lifeboat, and an armed escort back to Indonesia.

This is the first close-up look at one of the 11 lifeboats that the Abbott Government has sourced out of Singapore in its uncompromising fight to stop the boats – a fight that it appears to be winning.

Indonesian Naval officer Edi Sukendi, based in Ujung Genteng, the closest point between Indonesia and Australia, got word from a forest ranger that an unusual vessel had crash-landed and disgorged an estimated 60 asylum-seekers, who immediately scattered into the jungle.

Sukendi, a naval operational with no boat of his own, asked a local fishermen to take him up the coast to Cikepuh to investigate. They found the orange capsule jammed on a coral reef within wading distance of shore and approached it cautiously.

“When we first saw it, we were very surprised,” Sukendi said. “We were worried it might have explosives.” He said they found discarded food and water bottles with Malaysian markings, and first assumed it had come from there.

Prime Minister Abbott’s turn-back policy has caused intense heat at the highest diplomatic levels between Indonesia and Australia. But there is no question the policy has sent a shock through smuggler and asylum networks, already reeling from Kevin Rudd’s declaration of July last year that no one who arrived by boat would ever settle in Australia. 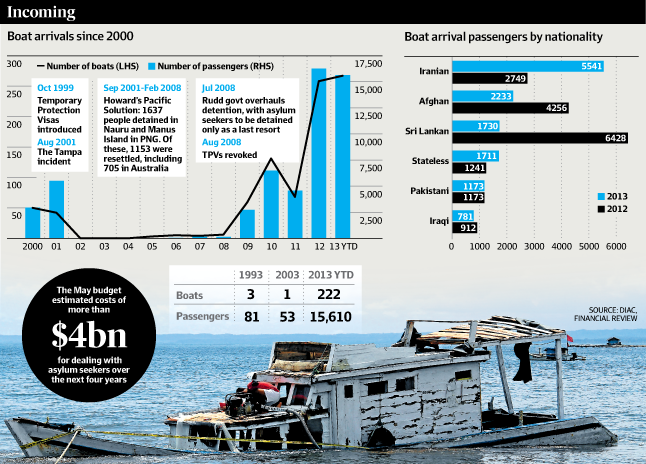 Indonesia Has Been Helping the Boat-Muslims All Along

Cisarua, in central West Java, once the biggest catchment for Australia-bound asylum-seekers, is a shadow of what it was only seven months ago, when thousands of asylum-seekers were highly visible on the city’s streets.

From June 2012 to June 2013, there was a huge surge in the boats, when 25,793 people made it to Australia under the former government. Most of those were Sri Lankan and Iranians, who during that period came in an unprecedented rush.

Now, it is estimated there are only 20 Iranian families left in the area. Most have gone home or are scattered in detention centres across Indonesia, awaiting formal resettlement.

Immigration Minister Scott Morrison’s office said in March last year, 68 per cent of people registered with the UNHCR in Indonesia were failing to do follow up interviews and were instead “opting to attempt to enter Australia illegally by boat. By December last year, that rate had dropped to nine per cent.”

When asylum seeker boats are picked up, they are fed and photographed, then ordered into the lifeboat. If they refuse to enter the capsule, they are shoved inside and given documents stating they were not permitted to enter Australian waters.


When asked about the above report, Mr Abbott today said the government’s border protection policies were helping stop the flow of asylum seeker boats. He made reference to a prospective asylum seeker quoted in the report as saying the passage to Australia was now closed.

“Well, thank you sir, the way is closed … and as far as this government is concerned never ever will it be reopened,” Australia’s newly-elected conservative PM Tony Abbott told reporters in Brisbane.

News Corp heard a report from an Iranian asylum-seeker, who took the boat that sunk off Java on July 23, that his group had been escorted to the coast in 11 mini-vans by 15 plainclothes men (from Indonesia police and military) carrying automatic rifles and pistols.

The asylum-seeker said the presence of the armed escorts – whom he believed were off-duty police or military – was unprecedented in the experience of most asylum-seekers, but showed how serious the smugglers had become as the way to Australia became harder.

PRIME Minister Tony Abbott has described pictures of a lifeboat aground in Indonesia as "rather arresting" but refused to say if the vessel was used by Australian authorities to send back asylum-seekers.

The sophisticated orange lifeboat was discovered by Indonesian authorities on the west coast of Java and was believed to be carrying around 60 asylum seekers, The Daily Telegraph reported.

The "unsinkable" boat is one of 11 purchased by the Abbott government in a bid to stop asylum seekers from reaching Australia. Operation Sovereign Borders commander Angus Campbell confirmed the purchase of lifeboats in mid-January but declined to say how they would be used.

When asked about the above report, Mr Abbott today said the government’s border protection policies were helping stop the flow of asylum seeker boats. He made reference to a prospective asylum seeker quoted in the report as saying the passage to Australia was now closed.

“Well, thank you sir, the way is closed … and as far as this government is concerned never ever will it be reopened,” Australia’s newly-elected conservative PM Tony Abbott told reporters in Brisbane.

A spokesman for Immigration Minister Scott Morrison refused to comment about the lifeboats, saying the government would not provide details about operational matters related to border security.

Mr Morrison came under pressure at a parliamentary hearing on Thursday probing the high level of secrecy around his Operation Sovereign Borders taskforce. He refused to confirm whether he had read a series of documents he was seeking to block from release.

Mr Morrison claimed immunity from public interest in the documents and said their release could put navy and Customs personnel at risk, damage foreign relations and compromise national security.


He told the hearing it remained Coalition policy to turn asylum seekers' boats around when it was safe to do so but would not give details of situations in which that had happened.
Related posts at following links:
Australian Navy Turning Muslim-Boats Back To Indonesia
Posted by Hla Oo at 1:11 AM