VATICAN CITY — Pope Francis on Sunday called the slaughter of Armenians by Ottoman Turks “the first genocide of the 20th century” and urged the international community to recognize it as such, sparking a diplomatic rift with Turkey at a delicate time in Christian-Muslim relations.

Armenian President Serzh Sargsyan, who was on hand to mark the 100th anniversary of the slaughter at a Mass in St. Peter’s Basilica, praised the pope for calling a spade a spade in an interview with The Associated Press. But Turkey, which has long denied a genocide took place, immediately summoned the Vatican ambassador in Ankara to complain.

“The pope’s statement which is far from historic and legal truths is unacceptable,” Foreign Minister Mevlut Cavusoglu tweeted. “Religious positions are not places where unfounded claims are made and hatred is stirred.”


Francis, who has close ties to the Armenian community from his days in Argentina, defended his pronouncement by saying it was his duty to honor the memory of the innocent men, women and children who were “senselessly” murdered by Ottoman Turks. “Concealing or denying evil is like allowing a wound to keep bleeding without bandaging it,” he said at the start of a Mass in the Armenian Catholic rite honoring the centenary.

In a subsequent message directed to all Armenians, Francis called on all heads of state and international organizations to recognize the truth of what transpired to prevent it from happening again, and oppose such crimes “without ceding to ambiguity or compromise.”

Historians estimate that up to 1.5 million Armenians were killed by Ottoman Turks around the time of World War I, an event widely viewed by scholars as the first genocide of the 20th century.

Turkey, however, has insisted that the toll has been inflated, and that those killed were victims of civil war and unrest, not genocide. It has fiercely lobbied to prevent countries, including the Holy See, from officially recognizing the Armenian massacre as genocide.

Turkey’s embassy to the Holy See canceled a planned news conference for Sunday, presumably after learning that the pope would utter the word “genocide” over its objections. Instead, the Foreign Ministry in Ankara issued a terse statement conveying its “great disappointment and sadness.” It said the pope’s words signaled a loss in trust, contradicted the pope’s message of peace and was discriminatory because Francis only mentioned the pain of Christians, not Muslims or other religious groups.

Francis’ words had immediate effect in St. Peters, where the head of the Armenian Apostolic Church, Aram I thanked Francis for his clear condemnation and recalled that “genocide” is a crime against humanity that requires reparation.

“International law spells out clearly that condemnation, recognition and reparation of a genocide are closely interconnected,” Aram said in English at the end of the Mass to applause from the pews, where many wept.

In an interview with the AP after the Mass, the Armenian president, Sargsyan, praised Francis for “calling things by their names.” He acknowledged the reparation issue, but said “for our people, the primary issue is universal recognition of the Armenian genocide, including recognition by Turkey.”

He dismissed Turkish calls for joint research into what transpired, saying researchers and commissions have already come to the conclusion and there is “no doubt at all that what happened was a genocide.” 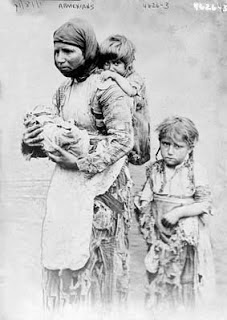 Several European countries recognize the massacres as genocide, though Italy and the United States, for example, have avoided using the term officially given the importance they place on Turkey as an ally.

The Holy See, too, places great importance in its relationship with the moderate Muslim nation, especially as it demands Muslim leaders condemn the slaughter of Christians by Muslim extremists in neighboring Iraq and Syria.

But Francis’ willingness to rile Ankara with his words showed once again that he has few qualms about taking diplomatic risks for issues close to his heart. He took a similar risk by inviting the Israeli and Palestinian presidents to pray together for peace at the Vatican — a summit that was followed by the outbreak of fighting in the Gaza Strip.

Francis is not the first pope to call the massacre a genocide. In his remarks, Francis cited a 2001 declaration signed by St. John Paul II and the Armenian church leader, Karenkin II, which said the deaths were considered “the first genocide of the 20th century.”

But the context of Francis’ pronunciation was different and significant: He uttered the words during an Armenian rite Mass in St. Peter’s marking the 100th anniversary of the slaughter, alongside the Armenian Catholic patriarch, Nerses Bedros XIX Tarmouni, Armenian Christian church leaders and Sargsyan, who sat in a place of honor in the basilica.

The definition of genocide has long been contentious. The United Nations in 1948 defined genocide as killing and other acts intended to destroy a national, ethnic, racial or religious group, but many dispute which mass killings should be called genocide and whether the terms of the U.N. convention on genocide can be applied retroactively.

Reaction to the pope’s declaration on the streets in Istanbul was mixed. Some said they supported it, but others did not agree. “I don’t support the word genocide being used by a great religious figure who has many followers,” said Mucahit Yucedal, 25. “Genocide is a serious allegation.”