ISIS linked to Muhammad cartoon contest shooting as suspect is identified. An Arizona man who wanted to travel to Somalia to take up arms with Islamic militants is one of two suspected shooters who attacked a “Draw Mohammed” event in Texas, law enforcement sources said.

Phoenix resident and Islam convert Elton Simpson, 30, and his Muslim roommate, Nadir Soofi, 34, tried to shoot their way into a politically charged art show and conference at the Curtis Culwell Center in Garland, Texas, on Sunday night, a source said.

“We think their strategy was to get to the event center,” Joe Harn, public information officer for the Garland Police Department, said at a press conference Monday. He didn’t name the men or call it a terrorist attack.


But officials believe Simpson sent out a series of terrorism-related tweets ahead of the shooting — including one with the hashtag #Texasattack that was sent about a half hour before the two gunmen were shot and killed by officers defending the events space.

The account, “Shariah of Light,” showed a photo of Anwar Awlaki, an American-born cleric killed by a drone strike in Yemen in 2011. “May Allah accept us as mujahideen,” read the message sent at 6:35 p.m. Central Time.

That same account had also published messages that were sympathetic to terror groups, including ISIS. And it encouraged people to follow another account,“AbuHussainAlBritani,” belonging to a British jihadist who posted messages linking the Texas shooting to the Islamic State, Fox News reported.

“Allahu Akbar!!!!! 2 of our brothers just opened fire at the Prophet Muhammad art exhibition in texas!” one tweet read. “They Thought They Was Safe In Texas From The Soldiers of The Islamic State,” read the last tweet from the account, which has since been deleted.

ISIS had been sending messages about the controversial event for more than a week, calling for attacks. One referenced January’s Charlie Hebdo massacre in France and said it was time for “brothers” in the United States to do their part.

FBI agents began investigating Simpson in 2006, and, at one point, even hired an informant at Simpson’s mosque to find if he had any terrorist plans, according to court records. Simpson was recorded telling the informant he had wanted to travel to Somalia, via South Africa, to join radical fighters, federal agents said. “If you get shot, or you get killed, it’s [heaven] straight away”…. “[Heaven] that’s what we here for…so why not take that route?”’ Simpson allegedly told the informant.

Simpson was convicted in 2010 of lying to federal agents about his plans to travel to Africa, but a judge ruled the government did not adequately prove he was going to join a terror group there. He was sentenced to three years’ probation.

Simpson’s father, Dunston, told ABC News on Monday his son had “made a bad choice.” “We are Americans and we believe in America,” he said, adding that Simpson had been working in a dentist’s office.

The bloodshed in Texas started on Sunday night when Simpson and Soofi got out of their car outside of the events center around 6:50 p.m. and started shooting at two cops with their assault rifles, Harn said.

One of the officers, a traffic cop, fired back at them with his service weapon, killing both Simpson and his accomplice. “He did what he was trained to do and under the fire that he was put under he did a very good job and probably saved lives,” Harn said.

The other officer, an unarmed safety agent named Bruce Joiner, was shot in the leg during the violent confrontation and treated at a local hospital. He was released two hours later.

A bomb squad searched the shooters’ car for more weapons, but only found luggage inside. FBI agents and a bomb squad were at Simpson’s home in an apartment complex in north Phoenix on Monday — after agents sent a robot into his apartment to conduct an initial search.

The “Draw Mohammed” event was sponsored by Pamela Geller, a New York woman who has crusaded to post anti-Islam ads on subways and buses. Because of the sensitive nature of the event — officially called the Mohammed Art Exhibit and Cartoon Contest — Geller’s organization was required by the city to hire the large additional security force, which cost $10,000, according to the Dallas Morning News.


Depictions of Muhammad are considered blasphemous by many Muslims.

The Islamic Community Center of Phoenix however is controlled by the North American Islamic Trust (NAIT) which is a Muslim Brotherhood front group. It featured an appearance by terrorist supporter Lauren Booth, a convert to Islam and employee of Iran’s PressTV, who has propagandized on behalf of Hamas and Hezbollah, terror groups sponsored by Iran. Booth has spread the claim that the Boston Marathon bombing was staged.

Booth’s appearance there was to fundraise for the Muslim Legal Fund of America which, among other things, has funded the defense of Islamic Jihad leader Sami al-Arian. The MLFA is also involved in the Holy Land Foundation Hamas funding case and terrorists involved in the Fort Dix plot to “kill as many soldiers as possible”.

Greenfield also noted something unusual about the second gunman. Well, maybe not unusual for a radically, pious Muslim —   He hated dogs:

Nadir Soofi appears to be a Pakistani immigrant, he graduated from a Pakistani school, and spent time on social media ranting about America, Israel and dogs. Soofi was not a fan of dogs, writing, “Man can protect his life and health by keeping a safe distance from dogs. He should not hug them, play with them, or let them come close to children. Children should be taught not to play with dogs or to fondle them.”

Looks like Soofi was suffering from the usual Islamic Dogophobia.

(Blogger's Notes: Pamela Geller should stage more of Draw Mohamad competition all over US as these attractions will provide US law enforcement agencies ample opportunities to draw out so-called lone-wolf Islamist thugs into the open and then kill them cheaply. Left wing media in US has already called it the Muslim Baiting.) 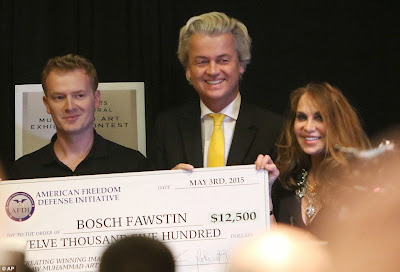 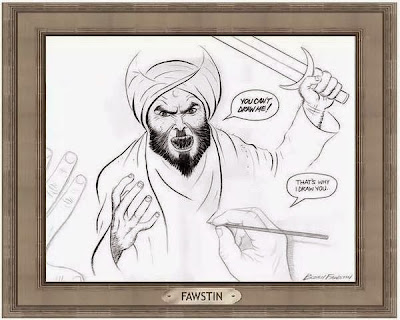