Through its Amaq News Agency, ISIS claimed responsibility for what it called "martyrdom attacks" in the port city on the east coast of Java Island but provided no proof to substantiate its claim. Authorities have not confirmed the claim.

According to Karnavian's chronology of events, which doesn't line up with the sequence Mangera previously provided to the state-run Antara news agency, the father, identified as Dita Oepriarto, drove a van to the Indonesian Christian Church and dropped off wife Puji Kuswat and their 9- and 12-year-old daughters.

The wife and daughters went inside and detonated a bomb, Karnavian said. The father then drove the van to the Pentecost Central Church, where, from inside the vehicle, he detonated another bomb in front of the church.

At the same time, the general said, Oepriarto's sons drove motorcycles to Santa Maria Catholic Church, where they, too, detonated bombs. According to CCTV footage, the bomb at that church went off at 7:08 a.m. (8:08 p.m. ET Saturday). Forensic evidence indicates the bombs were attached to the attackers' bodies, Karnavian said.


Police have closed all three locations as they investigate. At the family's home, investigators found three plastic boxes containing pipe bombs, Surabaya police Grand Commissioner Rudi Setiawan said. A bomb squad conducted a controlled explosion of the devices, he said. The investigators also found "black powder" at the homes, and officers seized books and documents from the house, Setiawan said.

Pope Francis prayed for the victims of the attacks during his weekly Sunday audience in St Peter's Square. "Together we invoke the God of peace to cease these violent actions, and in the heart of all, find space not for hatred and violence but for reconciliation and fraternity," he said.

The US Embassy in Jakarta condemned the attacks. "These attacks on peaceful worshipers are an affront to the tolerance and diversity embraced by Indonesians. The United States stands with the people of Indonesia, and we offer our deepest condolences to the families of the victims," the statement read.

Indonesian President Joko Widodo toured the site with government ministers Sunday afternoon, meeting with local authorities and politicians before visiting the wounded at a local hospital.

Indonesia is the world's most populous Muslim country. More than 82% of its roughly 261 million people follow Islam. Almost 10% of the population is Christian. Indonesia has long struggled with domestic terrorist groups, particularly the al-Qaeda affiliated group Jemaah Islamiyah, which claimed responsibility for 11 attacks between 2000 and 2010, including the deadly 2002 Bali bombings that left more than 200 people dead and hundreds injured, many of them tourists.

In recent years, Indonesia has been confronting ISIS attempts to recruit members in the country. In May 2017, two suicide bombers attacked a bus station in the capital, Jakarta, killing at least three police officers and wounding six officers and five civilians. Authorities suspect ISIS involvement.

In 2016, ISIS said it carried out a suicide bombing and shooting near a Starbucks in Jakarta. Two people were killed and 24 were wounded. It was the first major attack in Jakarta since Jemaah Islamiyah's 2009 simultaneous attacks on the J.W. Marriott and Ritz Carlton hotels, which left seven people dead. 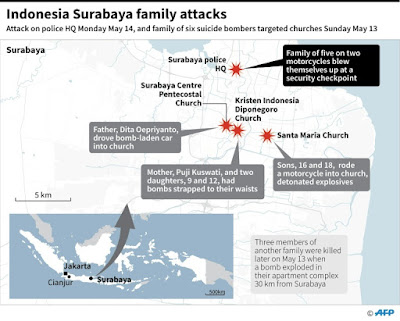 Family of six were behind the wave of blasts targeting three churches in Indonesian city of Surabaya. An Indonesian family brought its eight-year-old daughter to a suicide bomb attack it launched on Monday on the police headquarters in the country's second-largest city, authorities said.

The attack came a day after members of another family conducted coordinated suicide bombings on three city churches that killed 12 people. National police chief Tito Karnavian said the girl, who was with two of the attackers on a motorcycle, survived being thrown by the blast at Surabaya's police headquarters. The attack killed the four perpetrators. Six civilians and four officers were wounded.

The attack came just hours after police said the family that carried out the church bombings included girls aged 9 and 12. The flurry of bombings raised concerns that previously beaten-down militant networks in the world's most populous Muslim-majority nation have been reinvigorated by the return of some of the estimated 1100 Indonesians who went to fight with the Islamic State group in Syria.

Experts have warned for several years that when those fighters return, they could pose a significant threat. ISIS claimed responsibility for the church bombings in a statement carried by its Aamaq news agency. Karnavian, however, said earlier police comments that the family had spent time in Syria were incorrect.

He said the church bombers and the police headquarters attackers were friends, as were another family whose homemade bombs exploded in their apartment Sunday night. The use of children in the attacks has been particularly horrifying to people.

"This is terrifying," said Taufik Andrie, executive director of an institute that runs programmes to help paroled militants reject extremism and rejoin society. "This is showing how extremist ideology can entrap children. Children have no choice. They can't comprehend the decisions involved." All told, 25 people have died since Sunday including a total of 13 militants and their children.

Indonesian President Joko "Jokowi" Widodo condemned the attacks as "barbaric" and vowed that authorities would root out and destroy Islamic militant networks. The top security minister, Wiranto, who uses one name, said the government will attempt to hasten passage of an updated anti-terrorism law that has languished in parliament. 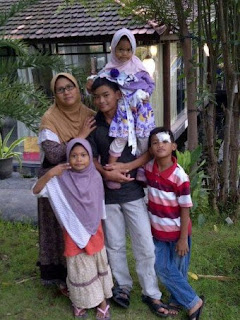 A security camera video of the attack on Surabaya's police headquarters showed at least one explosion after the four attackers rode two motorcycles up to a security checkpoint. The motorcycles, which moved closely together, pulled up alongside a car and four officers manning opposite sides of the checkpoint.

Two men, apparently civilians, were walking into the area just metres from the motorcycles at the moment of the explosion, which a split second later was followed by a second possible blast.

Indonesia's deadliest terrorist attack occurred in 2002, when bombs exploded on the tourist island of Bali, killing 202 people in one night, mostly foreigners. Jemaah Islamiyah, the al-Qaida affiliated network responsible for the Bali attacks, was obliterated by a sustained crackdown on militants by Indonesia's counterterrorism police with US and Australian support. Its leaders were killed in police raids and hundreds of militants were arrested.

Karnavian said the father of the family that carried out the church bombings was head of the Surabaya cell of Jemaah Anshorut Daulah, an Indonesian militant network affiliated with Isis that has been implicated in attacks in Indonesia in the past year. All six members of the family were killed.

The ISIS statement claiming responsibility for the attacks didn't mention anything about families or children taking part and said there were only three attackers. The group also claimed responsibility for a hostage-taking ordeal last week by imprisoned Islamic militants at a detention centre near Jakarta in which six officers were killed.

Separately on Sunday, three members of another family were killed when homemade bombs exploded at an apartment in Sidoarjo, a town bordering Surabaya, police said. The church attacks occurred within minutes of each other, according to Surabaya police spokesman Frans Barung Mangera.

Karnavian said the father drove a bomb-laden car into the city's Pentecostal church. The mother, with her two daughters, attacked the Christian Church of Diponegoro, he said. Based on their remains, Karnavian said the mother and daughters were all wearing explosives around their waists. The sons aged 16 and 18 rode a motorcycle onto the grounds of the Santa Maria Church and detonated their explosives there, he said. 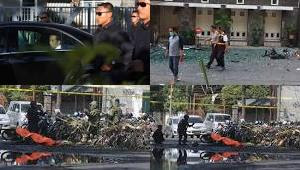 The families behind a wave of suicide bombings in the Indonesian city of Surabaya were all members of the same religious study group who radicalised some of their children through homeschooling, investigators in East Java have said.

Ch Insp Machfud Arifin said the three families were all connected through a Sunday evening group, adding that they met each week to study Islam and watch jihadist films. The content of the films included footage from Syria and Iraq, as well as Isis attacks in France, and was intended to encourage those in the group to commit terrorist attacks, he said.

“The Surabaya cell and the Sidoarjo cell are the same network because they met regularly on Sunday evening,” said Arifin, referring to the three families behind the attacks. The study group met at the Surabaya home of Dita Oepriarto, the father of a family of six that targeted three churches in coordinated suicide bombings just before services began on Sunday morning, police said.

Oepriarto, his wife, Puji, and their four children, the youngest, a daughter aged nine, carried out the deadly strikes. Speaking on Tuesday, Arifin said some of the children of the three families had been homeschooled as a way to radicalise and insulate them from outside ideas. “What happened is their parents indoctrinated the children,” said Arifin, “So when the mother asked them to wear the waist bombs they did it.”

At least 26 people were killed and dozens more injured in the multiple suicide bombings, the deadliest terrorist strike in Indonesia in more than a decade. Of those killed, 13 were the perpetrators.

The first attack targeted three churches early on Sunday morning. Later that evening there was multiple explosions in a flat in Sidoarjo, less than 12 miles from Surabaya. The authorities believe the blasts were from bombs exploding prematurely. Police said they uncovered the link between the three families through interviews with the surviving children of the Sidoarjo family.

On Monday morning a family of five also bombed the Surabaya police headquarters. Using two motorbikes, they drove into the carpark where they detonated their waist bombs. An eight-year-old girl is the only surviving family member.

All perpetrators in both the church bombings and police station attack had their national identification cards on them. Police said it was as though they wanted to be easily identifiable.

The three families are believed to members of the pro-Isis Indonesian militant group, Jamaah Ansharut Daulah (JAD). Oepriarto was the head of the Surabaya extremist group. Police said they were hunting for two senior JAD members in East Java. 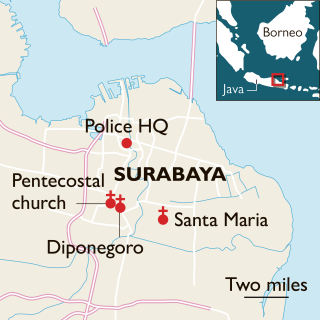 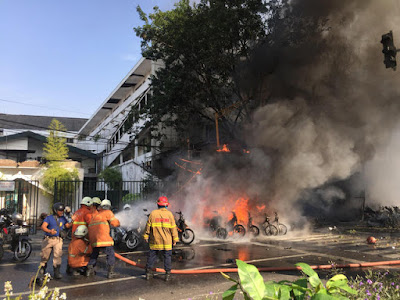 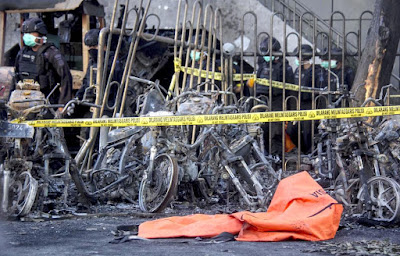