Why Is Myanmar Angry? This Book Has Answers! 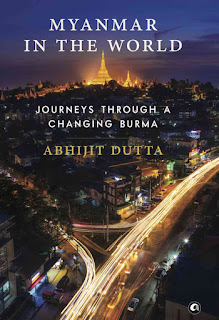 A few months after my trip to Rathedaung, I would return to Rakhine State, to the southern township of Kyaukphyu. There I would meet Bhojon Chakraborty, a thirty-six-year-old part-time temple priest. It is the only Hindu temple in town (Kyauk-Phyu), just as he is its only priest.

I had stopped because I had seen Bengali script and the words “Hindu Temple Sri Sri Durga Bari”. The inscription, donated by Rebati Ranjan Dey of Chottogram (Chittagong), dated back to 1961.The temple itself is ninety years old.

Bhojon Chakraborty, who has renamed himself John Chakraborty, is a Hindu Brahmin. He was born in Yangon and lived there most of his life, before arriving in Kyaukphyu chasing a medical representative job. Even though there are few things that cry “Bengali” louder than “Bhojon” and “Chakraborty”, I don’t remark upon it. We converse in Hindi.

His pleasure turns to delight when he discovers I speak Bengali. We had both been tentative at the beginning. Kyaukphyu is even more trenchant than Sittwe in its hostility to “Banglis” and therefore a safety concern.


I wasn’t sure how to distinguish my Hindu, West Bengal Bengaliness from the Bangli, and so, it was Bhojon who leaned close to me and asked in a whisper, “Don’t mind but what is your last name?” “Dotto,” I say, deliberately pronouncing Dutta in the Bengali way.

His face widens into the widest of smiles, his arm wraps around my shoulders and he guides me to a chair, shouting to his mother, who was watching us from the other side of the kitchen, to make me tea. He discards the halting Hindi we had been speaking in as swiftly as one drops one’s longyi and we switch to a Bengali that my father would certainly term chattgãiyan (Chittagonian).

All my childhood I have grown up with the linguistic taunts that Bengalis make about Bangals, the stereotypes of chingri versus ilish, Mohun Bagan versus East Bengal, Ghoti versus Bangal. Here though, in this Rakhine majority town, whom Bhojon referred to by the traditional Bengali name Mog, we were same to same, as it were.

Bhojon’s mother is Rakhine, from Sittwe, and had married his Chittagonian father, who went on to become an immigration officer, a fact we have a good laugh over given that he has been to hell and back to obtain his current identity card. Both his grandparents were from Chittagong.

Besides being a priest at the temple, a gig he landed quite by accident and at a time of desperation, he is also the local representative for a project called Religious Peace for Myanmar.

Trustees and moderators of the parent organisation, Religions for Peace, include the American economist Jeffrey Sachs, leaders of the World Jain Confederation, the Hindu Council of Africa, and the Gandhi Development Trust, among a dozen other interfaith organisations.

I say, “Ekhane toh religious peace nei, toh ki kaj koren apni (There is no religious peace here, what work can you possibly be doing)?” He laughs out loud and says with great glee, “Nei toh (It’s not there indeed)!”

As part of his duties, he is responsible for organising interfaith meetings once a month. I say I am impressed when he talks about the project’s aim to have communities in conflict talk to each other face-to-face.

“Wow,” I exclaim, “you managed to get the Rakhine to talk to the Muslims without killing each other.”
“Na, dada, shey ki aar hoi (No, brother, is that possible)?”
“Then?”
“We have found one Mog, one Christian, and one Hindu, me,” he says in-between “hehehe” sort of laughter.
“And Muslim?”
“No Muslim. Muslim not okay here. If I get Muslim, I will be killed.”
“What else do you do for religious peace?”
“We have distributed helmets for motorbikes, for road safety.”
“How is that religious peace?”
He cackles and says, ‘Ki dekhchen (What do you think)?” – a wink- wink acknowledgement of the racket he is running.

The tea arrives. I had been dreading it because I did not feel equipped for premix or for the cheap condensed milk tea that you get everywhere in Myanmar. But this was proper Indian chai, boiled with milk and tea leaves. I turn around to say, “Mashima, cha ta khoob bhalo hoechhe (The tea tastes good),” and the woman grins toothlessly. She understands. 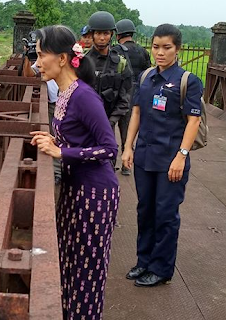 In a while, a man and his family enter the temple. He touches Bhojon’s feet and Bhojon introduces him as “my friend from Buthidaung”. The man adds, “My name Lalmohan Sharma.” (He also told me his Rakhine name but I was too carried away by “Lalmohan” to note it.)

Lalmohan babu didn’t speak Bangla, only Hindi. He had lived in Kyaukphyu for twenty years but had been back in Buthidaung for the past seven. It’s his ancestral home and where his ageing mother lived (and had emotionally blackmailed him to return to and be with her). He came back often to Kyaukphyu.

This time it’s to ask Bhojon for an auspicious time and date for his daughter’s wedding. The daughter is to marry a Rakhine boy who lives in Kyaukphyu. Another mixed marriage, I think. How long before the Rakhine racial pride finally adjusts itself to the world around it?

When asked what the solution to the crisis in Rakhine is, Suu Kyi has repeatedly answered that, besides amending the Citizenship Law and bringing economic development to the state, it is “to promote love and compassion”.

Typically, it is an answer – like her emphasis on “rule of law” – that is dismissed out of hand, spat on, and described not only as ineffectual but as a non sequitur almost. What’s love got to do with human rights, these commentators scoff. Only the theatrics of condemnation and sententious posturing will do.

To these men – for they are mostly male and of the kind who think it is appropriate to sneer at Suu Kyi’s political thinking because she was once only a “housewife” – these are silly feminine ideas that they will have no truck with. If there is no action, no condemnation, no clear heroes to worship or villains to slander, if there is no cause – then they don’t want to play because it makes it so very difficult to signal their virtue.

In the face of suffering and trauma and displacement of half a million people, and a precarious political transition in one of the most fragile and poor countries in the world that has systematically hollowed out its institutions, their best idea is to take away Suu Kyi’s Nobel.

Is this merely a poverty of imagination, a manifestation of their utter illiteracy, or is it something more sinister and modern – an effect, perhaps, of the macabre self-absorption in a selfie world where all that matters is our location in a story, not the story itself?

Of all the tragic Rohingya refugee stories I have read online or watched videos of, none horrified me more than a piece of news about a Red Cross relief boat that was being loaded up in Sittwe, its goods destined for Maungdaw.

When some locals – Buddhist Rakhine – found out where the vessel was going, they gathered up a crowd and threw petrol bombs, and forced the crew to unload. There was no trigger, nothing had happened, there had been no incident to cause a clash, no terror attacks, no clearance operations.

It was just a boat loaded with solar panels, blankets, tarpaulin, sanitary pads and mosquito nets.Yet, these people tore at it, lynched it like it would kill them if it was allowed to go. It had seemed like an act of pure hate, instinctive, irrational, inexplicable.

In Sittwe, I asked people – boatmen, hotel receptionists, drivers, shopkeepers – about this incident, about what had happened. They said that some locals, on finding a boat fully loaded with international cargo covered with tarpaulin headed to Maungdaw, had asked to see what was underneath the cover.

The crew in charge of the boat had refused. This led to rumour and suspicion: guns were being taken to Maungdaw, to be given to the terrorists, who would then come and kill all Buddhists.

This resonated; “international” only like Muslims and are against the Buddhists, so the theory was plausible. They tried to get onto the boat. They were pushed back. Fights broke out. People got hurt. It escalated.

When Suu Kyi says “there is fear on both sides” it is treated as the worst kind of equivocation, a politically expedient glibness. In fact, it is a very precise diagnosis of the problem.
It is never a good idea to compare conflicts or draw too much of an analogy, for every conflict is unique, their contours different, and solutions need to be tailor-made, but there is a theme here that we should be able to recognise. It is how a majority sees itself as a minority.

As the sociologist Ashis Nandy has said in another context, “Once you get into the game of disliking communities, cultures and civilisations, once you start thinking of yourself as the besieged majority, a majority acting like a cornered minority, you have laid the basis of a racist society.”

Our blindness to the abuses in Kashmir or in central India, the but-they-are-terrorists and what-about-the-Pandits line of rhetoric is cast no differently from how Phu Phu Khine and Tin Maung San and Than Htun see the situation.

There is a “Bangli” problem they read about in the newspapers, and they believe it as completely as viewers of Fox News and Republic TV believe what those channels have to say. Viber forwards and Facebook feeds confirm what they read in the papers, colour it in darker shades, and it becomes self-evident that terrorists have overrun Rakhine, that all the Muslims in Maungdaw and Buthidaung have joined them. And they worry about their own safety and the safety of their family.

Myanmar is in the world, for good and for bad. America’s festering war on terror, the growing malignancy of militant Islam in its wake, the hardening of chauvinist, anti-immigrant rhetoric in Europe, deepening economic inequality across the world, the contagion of social media and the pandemic of fake news – it all forms the backdrop against which Myanmar paints its picture.

Myanmar finds its racisms and xenophobia reflected in the wider world and it finds its place in the chorus. Myanmar is as angry as all of us, as bigoted, as murderous. 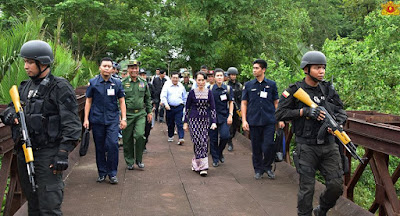 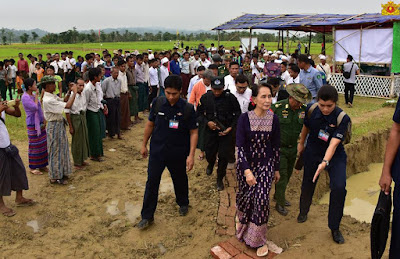 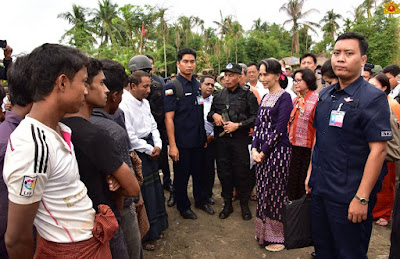