(Based on staff articles from The CLARION PROJECT in December 2018.) 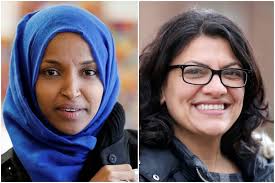 For the first time in US political history, two Muslim women joined the ranks of the US Congress with Western and Arab media widely reporting on their win during the first midterm elections under US President Donald Trump. Ilhan Omar, a Democrat, is the first Somali American to serve in Congress and Michigan Democrat Rashida Tlaib is a Palestinian American.

However, the Democrats’ battle against the Republican control of the US Congress, led to an alliance with Political Islamist movements in order to restore their control on government, pushing Muslim candidates and women activists of immigrant minorities, onto the electoral scene.

Around 90 Muslim Americans, the record number supported by massive funding from the Muslim nations through CAIR and Muslim Brotherhood, were running for office in 2018 midterm elections. In Minnesota, Ilhan Omar became the first Somalian-American and one of the first two Muslim women elected to Congress.


Ms Omar, a Democrat who served a single term in the Minnesota Legislature, easily won Tuesday's election for the Minneapolis-area congressional district being vacated by another Muslim, Keith Ellison. Ms Omar was born in Somalia but spent much of her childhood in a Kenyan refugee camp as civil war tore apart her home country.

She immigrated to the United States at age 12, teaching herself English by watching American TV and eventually settling with her family in Minneapolis, home to the world's largest Somali population outside of East Africa.

The common ground between Congresswomen Omar and Tlaib is that both are anti-Trump and his political team and options, especially his foreign policy starting from the sanctions on Iran to the isolation of the Muslim Brotherhood and all movements of political Islam.

Those sponsoring and supporting the two Muslim women to reach the US Congress adopted a tactic to infiltrate through their immigrant and Black minority communities in general, and women’s groups in particular. One example of that is the Palestinian American activist Linda Sarsour with roots in Muslim Brotherhood and a member of the Council on American-Islamic Relations known as CAIR.

On November 6, 2018, Michigan voters in the 13th district, elected Rashida Tlaib to the be their next United States Congresswoman. Tlaib will be filling the seat of the disgraced Democrat Congressman, John Conyers, the longest running member of the House before he was quietly run out of DC amidst several sexual assault allegations against him.

While Conyers was a sitting Congressman, his wife, Monica Conyers served a 3-year-term in prison for bribery while she was serving as a Detroit City Congresswoman. Former Congressman John Conyers (D) was hoping that his son would fill his seat, but when John Conyers III came up 1,000 signatures short on his petition to get his name on the primary ballot, Tlaib saw an opening in a weak US Congressional race and capitalized on it.

Representing Michigan’s 13th congressional district, encompassing southwest Detroit and its western suburbs to the Muslim-majority city of Dearborn, Tlaib, 42, made history, along with Minnesota’s Ilhan Omar, as they become the first Muslim women elected to Congress. Tlaib is also the first Palestinian-American woman elected to the legislative body. Both also ran on progressive Democrat platforms.

She has become “a source of pride for Palestine and the entire Arab and Muslim world,” Tlaib’s uncle Bassam Tlaib told Reuters in the small Palestinian village of Beit Ur Al-Fauqa.


In the video above Michigan’s first Muslim Congresswoman, Rashida Tlaib can be seen celebrating her victory by wrapping herself in the Palestinian flag and hugging her Palestinian mother.

Listen, as she tells the crowd about how proud the Palestinians on the West Bank are of her nomination to the US Congress, and how they’re glued to their televisions. You can also hear what appears to be a middle eastern male in the background expressing his enthusiasm, as he almost drowns out the sound of Tlaib’s voice with his celebratory ululation (a shrill sounding tongue trill that is commonly heard in the Middle East). 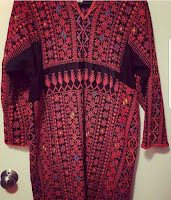 According to the Washington Free Beacon, Congresswoman-elect Rashida Tlaib (D-MI) did not disclose the name of the source of funds for a fellowship that was paid by liberal billionaire George Soros—as required by the House ethics committee—and also disclosed a lesser amount than she received, according to a review of tax and financial disclosure forms.

When independent journalist Laura Loomer confronted Tlaib about her support for the terror group, Hamas, and asked her why she is campaigning with the open Jew-hating activist Linda Sarsour, Rashida Tlaib attempted to yank Loomer’s phone from her hand.

Do we have a sense of humor anymore? Perhaps a more accurate question is: Are we allowed to? And if so, when it is appropriate?

Case in point is a tweet from newly-elected Democratic Congress woman Ilhan Omar. Commenting on what she perceived as passivity on Pence’s part during a heated discussion between President Trump and incoming Speaker of the House Nancy Pelosi (D-CA) and Senate Minority Leader Chuck Schumer (D-NY) on the border wall, Omar posted the following picture of Pence and tweeted,  “Jesus take the wheel! #BorderWall” 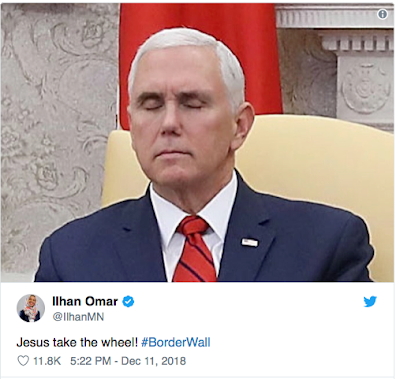 The tweet was “liked” by her fellow newly-elected Congresswoman Rashida Tlaib, who, along with Omar, made history this past November for being the first Muslim women elected to Congress.


The Left has made political humor quite touchy these days, but as in any dysfunctional scenario, often times we see that they can dish it out but not necessarily take it. Can one imagine if Pence, catching Omar in a similar pose and wanting to express his exasperation, had tweeted something that made fun of her Islamic faith?

Although one could argue that the expression is used to connote a situation that has gone so awry that the only option is for a higher power to take over, is it befitting to use such an expression that can easily be perceived as mocking religious Christians? Again, our moral litmus test should be to think about a similar situation where a “savior” figure for Muslims or blacks was substituted.

Omar, originally from Somalia, and Rashida Tlaib (D-MI) both made their religion and national origins prominent in their political ascent. Omar began began her acceptance speech with a pointed “as-salam-alaikum (peace be upon you).” Tlaib unabashedly danced with a Palestinian flag after winning her hotly-contested primary.

Both have continued to make their ethnic and religious origins prominent in their political journeys. Omar made waves as the House of Representatives was poised to lift its 181-year old ban against wearing hats on the floor of the House to accommodate her hijab. Tlaib tweeted a sneak preview of the dress she will be wearing when she is sworn into Congress — a traditional Palestinian thobe (hand-embroidered gown).

Such exceptions to the rules and/or displays are fashionable today in the “intersectional” circles of the Left, where claiming victimhood based on these statuses wins a politician honor. Yet, while the tweet may have won Omar the appropriateIslamist badges in her Leftist echo chamber, such behavior is below the dignity of her office.