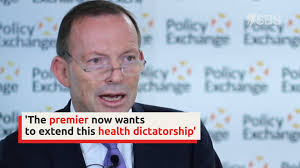 Speaking in London to the UK think tank Policy Exchange, Mr Abbott said the media had spread "virus hysteria" and people should be allowed to make their own decisions. "From a health perspective, this pandemic has been serious. From an economic perspective, it's been disastrous," he said.

"But I suspect that it's from an overall wellbeing perspective that it will turn out worst of all. Because this is what happens when for much more than a mere moment, we let fear of falling sick stop us from being fully alive.

"Now that each one of us has had six months to consider this pandemic, and to make our own judgements about it, surely it's time to relax the rules so that individuals can take more personal responsibility and make more of their own decisions about the risks they're prepared to run."

Mr Abbott said in hindsight, there had not been enough attention paid to keeping coronavirus out of aged care facilities. But he questioned a strategy that he argued had been adopted by most countries, of preserving "almost every life at almost any cost."

"So far, with Sweden the most notable exception, governments have approached the pandemic like trauma doctors instead of thinking like health economists, trained to pose uncomfortable questions about a level of deaths we might have to live with," he said.

"Even if mandatory shutdown [in Australia] really was all that avoided the initially predicted 150,000 deaths, that still works out at about $2 million per life saved. And if the average age of those who would have died is 80, even with roughly 10 years of expected life left, that's still $200,000 per quality life year or substantially beyond what governments are usually prepared to pay for life saving drugs."

Mr Abbott argued governments had shifted from trying to flatten the curve to achieving zero community transmission, a move he said had been justified by following the medical advice of "unaccountable experts."

He also said some officials were trapped in "crisis mode" longer than they needed to be, because it boosted their public standing, and accused Victorian Premier Daniel Andrews of wanting to extend a "health dictatorship" by pushing for an extension of state of emergency powers.

"There is absolutely no doubt that we had got to the stage in Australia of virtually zero community transmission, until the extraordinary ineptitude of the Victorian Government in the management of its hotel quarantine system produced what has been the biggest outbreak in Australia so far, responded to with the most severe lockdown tried anywhere in the world outside of Wuhan itself," he added.

He said he applied for an exemption to Australia's international travel ban in the "normal way" and that the trip, and his hotel quarantine on return, would be privately funded. He also predicted Australia's borders would gradually open over the next few months. 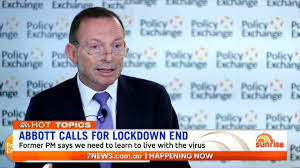 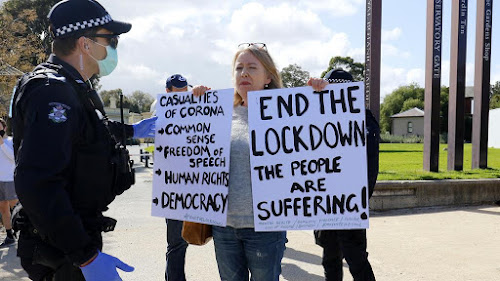 Police have arrested more than a dozen protesters in Melbourne and Sydney, as hundreds of people joined demonstrations against coronavirus restrictions across Australia.

Hundreds of protesters marched from Melbourne's Shrine of Remembrance to Albert Park Lake. They were met by police officers, who arrested 17 people and issued more than 160 fines. Smaller anti-lockdown protests were also held in Sydney, Brisbane, Adelaide and Perth.

Earlier today it was unclear how many people would be attending Melbourne's protests, with some anti-lockdown groups shifting to online events ahead of the State Government's roadmap announcement tomorrow.

However, hundreds of people gathered at the Shrine of Remembrance in the city's CBD this morning, despite warnings from health authorities. Around 300 protesters later walked from the shrine to Albert Park Lake, where police made more arrests as they attempted to contain the crowd.

In a statement, Victoria Police said officers arrested 17 people, including one person who was arrested for assaulting a police officer. Police issued more than 160 infringement notices for breaches of the Chief Health Officer's stay-at-home directions.

"As a result of the protest, a police officer received lacerations to the head after being assaulted by an individual who was in attendance," Victoria Police said in a statement. "Our investigations into this protest will continue, and we expect to issue further fines once the identity of individuals has been confirmed." 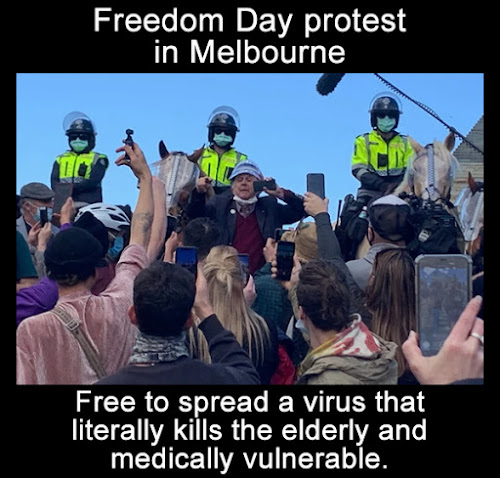 The protest appeared to have dispersed by around 2:30pm, but a strong police presence remained around the Shrine of Remembrance. Many of the protesters were not wearing masks. Some chanted "freedom", while others shouted insults at the media.

A woman at the Shrine of Remembrance was seen refusing to put a face mask on when asked to by police, saying she was healthy and did not need to. "There's no epidemic — it's just a pretext to keep us in lockdown," the woman told reporters as she was leaving.

Police officers on horseback met protesters at the shrine, and later near the lake, and the ABC has witnessed several arrests. Interstate rallies held in 'solidarity' with Victorian protesters. In Sydney, NSW Police arrested a number of people in Hyde Park and Olympic Park at protests staged in support of the rallies in Melbourne.

Among those arrested was a man who police say allegedly assaulted an officer. A number of protesters are still demonstrating and the police operations are ongoing. Hundreds of protesters also gathered at Brisbane's botanic gardens as part of the 'Freedom Day' protest movement.

Around 200 people joined a peaceful protest in Adelaide against coronavirus restrictions, a possible vaccine and privacy breaches. In Perth, hundreds of people rallied at State Parliament as part of the coordinated demonstrations.

Attendees Kenneth and Charmaine said they were there to "share our solidarity with our fellow human beings in Victoria". "They can't go about their own business, what they want to do, and we're concerned about that," they said. "Our economy is going to crash because if we don't start opening up borders and letting people have freedom of choice to do what they want to do, how are we going to exist?" 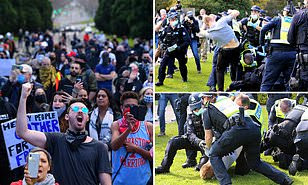