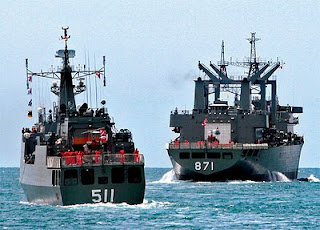 Two Thai navy ships with 351 sailors and 20 special warfare troops on board have set sail for the Gulf of Aden to take part in the hunt for pirates off the coast of Somalia. The mission marks the first time Thailand has sent forces overseas to protect its own interest.

The HTMS Pattani and HTMS Similan left yesterday with two helicopters lashed to the decks from Chuk Samet port at Chon Buri's Sattahip naval base to join a 28-country effort to police the shipping lanes off the Somali coast, which has become a piracy hotbed.

"The key mission of this 98-day operation is to protect Thai cargo ships and fishing vessels in those waters," said Adm Supakorn Buranadilok, Commander of the Royal Thai Navy Fleet. The navy expects up to 60 Thai ships to pass through the Gulf of Aden during the course of the operation.

Two navy ships with 371 sailors and special warfare marines on board set sail from Thailand to take part in international operations to protect ships from pirates in the Gulf of Aden and off Somalia.

Political chaos and civil war in Somalia have allowed piracy to flourish off the country's 3,100km coastline. Somali pirates were involved in more than half of the 406 reported pirate attacks worldwide last year.

They mounted 217 attacks in 2009, hijacking 47 ships and taking 867 crew members hostage with ransoms believed to total US$50 million (1.6 billion baht). A number of Thai ships have been hijacked by Somali pirates over the past five years. 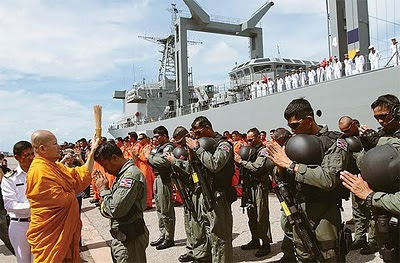 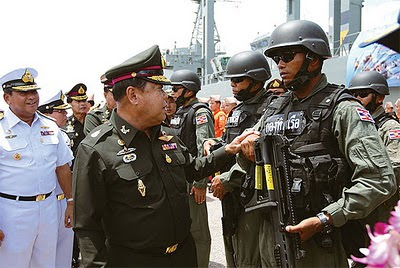 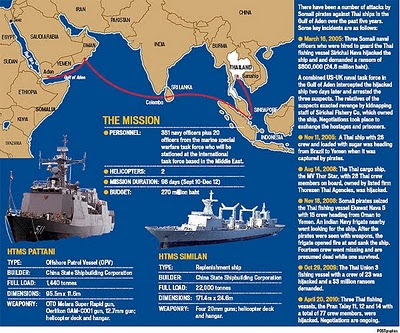 Related posts at following links:
Burmese of Prantalay-12 Captured by Somali Pirates
Posted by Hla Oo at 12:32 AM