A nightclub bouncer who reportedly became a terror group leader. A man who tweeted a photo of his young son clutching a severed head. A teenager who is believed to have turned suicide bomber, and others suspected of attempting to travel to Syria to join the Islamic State movement. All of them, Australian.
The London-based International Center for the Study of Radicalisation and Political Violence reports that between 100 and 250 Australians have joined Sunni militants in Iraq and Syria. Given Australia's vast distance from the region and its population of just 24 million, it is a remarkable number. The center estimates that about 100 fighters came from the United States, which has more than 13 times as many people as Australia.
Experts disagree about why the Islamic State group has been so effective recruiting in Australia, which is widely regarded as a multicultural success story, with an economy in an enviable 24th year of continuous growth.


Possible explanations include that some Australian Muslims are poorly integrated with the rest of the country, and that Islamic State recruiters have given Australia particular attention. In addition, the Australian government failed to keep tabs on some citizens who had been radicalised, and moderate Muslims have been put off by some of Prime Minister Tony Abbott's comments about their community.
Greg Barton, a global terrorism expert at Monash University in Melbourne, said Australia and some other countries underestimated Islamic State's "pull factor".
"We're all coming to terms with the fact that this is a formidable targeter and predatory recruiter that goes after individuals one by one with a very masterful use of technology, and our sense of confidence that because we've got society working well makes us secure misses the point," Barton said.
Muslims make up about 2.2 per cent of the population in Australia, compared to just one per cent in the United States. And while many US Muslims are from families who migrated in pursuit of the American economic dream, a larger proportion of Australian Muslims are from families who fled Lebanon's civil war in the 1970s and '80s.
Australian Muslims of Lebanese origin are largely based in Sydney, the country's biggest city. They have been less successful in integrating into Australian society than many other groups, and the first Australian-born generation of these migrant families has been overrepresented in terrorism offenses and general street crime. 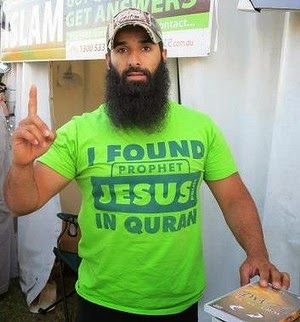 Mohammad Ali Baryalei, an ethnic Lebanese who reportedly became a high-ranking member of the Islamic State group's operational command, was formerly a Sydney nightclub bouncer and bit-part television actor. Australian security agencies suspect he single-handedly recruited dozens of Australians and helped them enter Syria.
Once a Sydney street preacher with the Muslim group Street Dawah, Baryalei was reportedly killed in battle in Syria last autumn at age 33. The Australian government has yet to confirm his death.
Baryalei is accused in court documents of inciting from afar Islamic State sympathisers in Sydney to brutally slay a randomly selected victim. Security services recorded a telephone conversation between him and Omarjan Azari, who is awaiting trial on charges that include preparing to commit a terrorist act.
"What you guys need to do is pick any random unbeliever," Baryalei allegedly told Azari, according to court testimony. "Backpacker, tourist, American, French or British, even better."
Sydney-born Khaled Sharrouf, also ethnic Lebanese, horrified millions last year by posting on his Twitter account a photo of his seven-year-old son clutching the severed head of a Syrian soldier. US Secretary of State John Kerry described the image as "one of the most disturbing, stomach-turning, grotesque photographs ever displayed".
Sharrouf's appearance on the Syrian battlefield highlighted a flaw in Australia's defenses against the Islamic State group: lax border security. Sharrouf had served a prison sentence in Australia for planning a foiled terrorist attack and had been banned from leaving the country, but used his brother's passport to leave in 2013.
The Australian government acknowledged there was a problem with a system of airport security that was more focused on who was coming in than on who was leaving. The government announced in August that biometric screening will be rolled out at all Australian international airports as part of $630 million in new spending on intelligence, law enforcement and border protection.
Counterterrorism police units have been attached to major airports to screen passengers. The unit at Sydney Airport was instrumental in recently intercepting two Sydney-born brothers, aged 16 and 17, who were about to fly to Turkey without their parents' knowledge. Authorities suspect the brothers were headed to Syria.
Australia's net still has holes.
Jake Bilardi, an 18-year-old who converted to Islam a few years ago, had avoided Australia's counterterror radar when he left his Melbourne home for Syria in August. After Bilardi's family reported him missing, police found chemicals that could be used to make a bomb at his home. Images of Bilardi armed with a rifle in front of Islamic flags appeared on social media sites later that year. 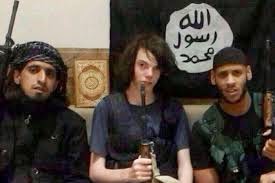 A picture of a young man resembling Bilardi behind the wheel of a van was posted this month with claims from the Islamic State group that foreign fighters from Australia and other countries took part in a near-simultaneous attack in Iraq that involved at least 13 suicide car bombs and killed two police officers. The Australian government has yet to confirm Bilardi's death.
Bilardi's father, who became estranged from Bilardi and his five older siblings after divorcing their mother, said the Islamic State recruit had had psychological problems as a child that were not addressed.
"He was a soft target," John Bilardi told Australia's "60 Minutes" television program in a television interview. "He was a prize; he was a trophy that they paraded online. They gloated about how they had recruited this young boy who didn't even have a Muslim background," he said. "They used him for their own — what cause? All I see is that they're murdering people, including my son," he added.
Foreign Minister Julie Bishop has been granted enhanced powers to prevent Australians from joining IS and, in some cases, from returning to Australia. She has cancelled about 100 passports, including Jake Bilardi's, though he left before his passport was revoked.
Keeping would-be militants from leaving Australia, however, increases the risk that they will wreak havoc at home.
Numan Haider, an 18-year-old Muslim Australian of Afghan origin, stabbed two Melbourne police officers and was shot dead in September, a week after his passport had been cancelled. He had caught authorities' attention months earlier over what police considered to be troubling behavior, including waving what appeared to be an Islamic State flag at a shopping mall.
Australian authorities were clearly taken by surprise by the growing domestic menace posed by Islamic State followers. Less than a year ago, officials reduced security at Parliament House to cut costs. Since then, security at the seat of national government has been increased to unprecedented levels.
In September, the government raised Australia's terrorist threat level to the second-highest level on a four-tier scale. Police attempting to disrupt terrorist plots have raided scores of homes. Several suspects have been charged and others have been detained without charge under new counterterrorism laws. The nation's main domestic spy agency is juggling more than 400 high-priority counterterrorism investigations — more than double the number a year ago. 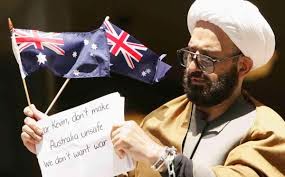 But the intensified vigilance was no hindrance to Man Monis, a 50-year-old Iranian-born, self-styled cleric with a long criminal history. In December, Monis took 18 people hostage at a downtown Sydney cafe, forced them to hold up a flag bearing the Islamic declaration of faith against a cafe window and demanded he be delivered a flag of the Islamic State group. Monis and two hostages were killed at the end of a 16-hour siege.
A government review found that Monis had fallen off a terrorist watch list despite repeated warnings to security services from members of the public concerned by his online rants. As a Shiite Muslim, he was thought an unlikely recruit to Islamic State, a Sunni Muslim movement.
As traumatic as the hostage crisis was, it could not be compared to the enormity of the September 11 terror attacks on the United States. Hass Dellal, executive director of the Australian Multicultural Foundation, which promotes awareness of cultural diversity within Australia, said that history might make Americans more resistant to Islamic State recruiting.
Dellal also said public discussion of issues around radicalisation and extremism is more balanced in the United States than in Australia, which effectively banned Middle Eastern Muslims from immigrating until the 1970s.
Some Muslims have been critical of comments by Prime Minister Abbott, accusing him of driving a wedge between them and the rest of Australia. "I've often heard Western leaders describe Islam as a religion of peace. I wish more Muslim leaders would say that more often, and mean it," said Abbott in a speech in February that angered many Muslims with its suggestion of duplicity.
Barton, the Monash University expert, said Australia may prove to be not so different from the United States, if the Islamic State group expands its influence in America. "It may be a lag effect," Barton said. "It may be in six months' time, the figures are much more comparable."