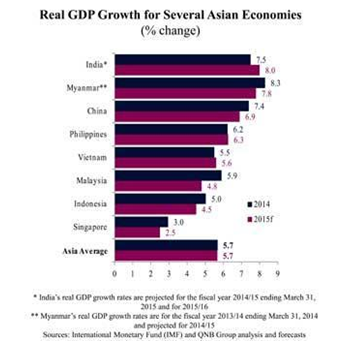 Notwithstanding the weak start for the global economy, Asian economies are expected to continue to grow rapidly in 2015.

"We expect economic growth to average 5.7 percent in 2015, the same rate as in 2014. However this masks significant differences across Asian countries that mainly depend on their exposure to global headwinds. India and Myanmar stand out as bright spots for 2015, while China, Indonesia, Malaysia and Singapore are expected to slow, given that these economies are most exposed to the weakening of the global economy. Looking ahead, this divergence in growth performance is likely to continue with countries less dependent on external demand (India and Myanmar) performing better than others," QNB said in its report.

Overall, the government expects these reforms to result in a growth rate of 8.0-8.5 percent in 2015/16, compared with an estimated 7.5 percent in 2014/15. If these three key reforms are fully implemented, we expect these growth rates to be achieved, making India one of the fastest growing economies in the world.

Myanmar is opening up to the rest of the world economy after two decades of international economic sanctions and underinvestment. As a result, the IMF expects Myanmar to grow by 7.8 percent in 2014/15, compared with 8.3 percent in 2013/14. Structural reforms are attracting FDI in infrastructure and the financial and manufacturing sectors.  However, Myanmar still needs to implement significant structural reforms to improve the ease of doing business. Going forward, the growth outlook remains favorable but downside risks remain.
China missed its 2014 growth target of 7.5 percent by 0.1 percent (the first outturn below target since 1998), mainly as a result of slower investment growth, a weakening of global demand for Chinese exports and lower growth in private consumption. Going forward, the government announced a growth target of around 7.0 percent for 2015 on the back of weak domestic demand and strong deflationary risks. We expect growth to be slightly lower than 7.0 percent due to domestic and foreign headwinds.
In the Philippines the economy is performing robustly, supported by strong remittances from overseas workers and accommodative monetary and financial conditions. Going forward, lower oil prices are expected to provide a stimulus to growth while inflation is likely to slow. The IMF projects the Philippines to grow by 6.3 percent in 2015, from 6.2 percent in 2014.
In Vietnam, the economy improved in 2014 underpinned by robust exports and foreign direct investment (FDI). Domestic demand, however, remains subdued partly due to tight financial conditions and inefficient state-owned enterprises (SOEs). The IMF forecasts Vietnam to grow by 5.6 percent in 2015, compared with 5.5 percent in 2014.
Malaysia’s economy is slowing as a result of lower oil prices and weaker domestic demand. The government has responded to lower oil prices by implementing significant fiscal consolidation which will weigh on growth in 2015. As a result, the IMF expects Malaysia to grow by 4.8 percent in 2015, compared with 5.9 percent in 2014.
Indonesia continues to face significant challenges amidst lower global commodity prices and tighter financial conditions. As a result, we expect economic growth to slow to 4.5 percent in 2015 as the USD debt overhang and the stronger USD are a drag on growth, making the government’s investment program harder to implement.
In Singapore, activity is slowing, reflecting headwinds from the global economy as well as lower domestic investment and real estate prices. "We expect growth of 2.5 percent in 2015, compared with 3.0 percent in 2014, on sluggish global demand and declining domestic investment spending," QNB said.
Overall, Asian economies are expected to continue on a similar growth path this year as they experienced in 2014. However, strong global economic headwinds suggest significant downside risks to several Asian countries most exposed to global trade.
The projected slowdown in US economic growth in Q1, deflation in advanced economies, the prospects of higher US interest rates and lower commodity prices are all likely to contribute to a significant slowdown in external demand for Asian exports and a cooling of domestic demand.
As a result, Indonesia, Malaysia and Singapore are most at risk of a further slowdown, while India and Myanmar are the least exposed. Nevertheless, Asia is still likely to remain the fastest growing region in the world in 2015.
Posted by Hla Oo at 7:56 PM