(Khadija Khan’s article direct from The GATESTONE INSTITUTE on 08 March 2017.)

Although these motions against "Islamophobia" are not legally binding, Muslim extremists in Canada have already started demanding them as laws.

A resolution, M-103, seeking to condemn so-called "Islamophobia," was introduced a few weeks ago in the peaceful country of Canada by Liberal Party MP Iqra Khalid (a Pakistani-Muslim Sharia Bitch) in the House of Commons, sparking a controversy.

A similar motion, labelled M-37, was later tabled in the Ontario provincial legislature by MPP Nathalie Des Rosiers on February 23, 2017, and was passed by the provincial parliament. M-37, like its predecessor, demanded that lawmakers condemn "all forms of Islamophobia" and reaffirm "support for government efforts, through the Anti-Racism Directorate, to address and prevent systemic racism across government policy, programs and services".


Although these motions are not legally binding, extremists have already started demanding them as laws. There are, of course, no comparable motions against "Judeophobia" or "Christianophobia". Neither motion M-103 nor motion 37 exactly define "Islamophobia," leaving that to the imagination of the supposed victim(s).

Hardliners who support this form of censorship, and presumably other restrictions required by Islamic sharia law, aim to blur the line between genuine bigotry and criticism of core problems across the Muslim world, such as the murder of apostates and homosexuals, communal hatred, anti-Semitism, violence against women and minors, female genital mutilation (FGM), child marriage, unequal legal and inheritance rights for women, stoning, flogging and amputation, and social taboos such as honour killings or right to choose a husband for girls or restrict girls' education.

Those who present these motions claim that "Islamophobia" is rampant across the country, but seem blind to Islamic sharia law's endorsement of killing homosexuals, violence against women and minors, atrocities such as those enumerated above, and notions of Muslim supremacy across the planet.

These issues are genuine concerns for millions of Muslims as well as human rights defenders, but are never addressed by those apologists, who always try to present these atrocities as perfectly acceptable "cultural norms".

People in hostile societies put their lives at risk by speaking against the majority; meanwhile, shutting out any criticism against hardliner behaviour in the West actually means giving extremists a license to keep on committing atrocities.

Broadly speaking, in the West, where people have the opportunity to stand up against persecution, Muslim extremists seem determined to sell themselves as victims and to get rid of whatever obstacles contradict a clearly expansionist agenda. Motion M-103 claimed: "Recently an infinitesimally small number of extremist individuals have conducted terrorist activities while claiming to speak for the religion of Islam".

The sales pitch for M-103 was given a pretty façade of human rights concerns, but actually inside was a veiled endorsement of a Muslim supremacist mentality. While M-103 asks to recognize the need to curb systematic racism and religious discrimination against Muslims, there are no traces of any systematic hatred or racism against Muslims or any religious groups in Canada.


On the contrary, Canada already has laws to curb any discrimination or abuse against individuals or groups. All that is needed is to enforce those laws already on the books. The Canadian Charter of Rights and Freedoms, and the Criminal Code, carry progressive laws to handle hate crimes or racism. Section 318, 319(1) and 319(2) are specifically designed to deal with such offenses.

Moreover, criticizing any genuine social concerns about a community or belief system is the democratic right of every citizen in a civilized country. Motions such as these are how most Muslim societies -- and other authoritarian states -- were founded: by depriving citizens of the basic right to express a difference of opinion, and worse, on the pretense of "doing good."

The blasphemy laws of Pakistan were introduced on the premise of protecting the sanctity of the people's religious beliefs, but the laws only ended up meting out public death sentences to innocent and marginalized victims. Under Muslim blasphemy laws, such as those being slowly presented to Canada, such deeds are punishable by death or life in prison. 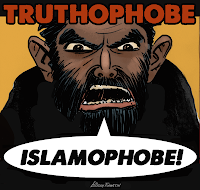 Unfortunately, blasphemy laws are often interpreted as a state's permission to attack, lynch or destroy non-Muslim minorities, while the attackers are regarded as heroes for their crimes. Victims of these laws also include critics of this barbarism such as Punjab's Governor Salmaan Taseer, Pakistan's Minister for Human Rights Shahbaz Bhatti, and often even human rights activists and the victims' lawyers.

Aren't we setting up the foundation of such norms in the West on pretense of curbing "Islamophobia"? (or Just making Canada more and more Pakistan-like?) For example, a supposedly "infinitesimally small" number of jihadis are capable of shutting the mouths of approximately 200 million people (equivalent to the entire Pakistani population), seemingly forever, by literally killing dissent. (and Canada is marching towards that goal?)

In the last century, the jihadis' spiritual father, Sayyid Qutb, commissioned Muslims to impose salafist-style Islamic rule on the world by destroying the "infertile West" and eliminating anything non-Muslim.

Qutb's book, Milestones, would undoubtedly be an eye-opener for those still unaware of what is required of "true" Muslims. The same is true of the writings of Hassan al-Banna, founder of the Muslim Brotherhood.

This ideology is clawing its way into very fabric of the West, in places such as Britain, Germany, Belgium, Sweden, America, Australia and France. It poses an imminent threat to the free world. Free societies will have to pay a heavy price if they choose to ignore the menace of extremism through a policy of appeasement and accommodation.

There is no need for specific laws about "Islamophobia": it is not even defined. Worse, many extremist clerics also consider as "Islamophobic" any criticism of their jihadism, communal hatred, polygamy and violence against women, minors or possibly anyone else they target. Canada has always been one of the most tolerant countries in the world; please let us keep it that way.


(Khadija Khan is a Pakistani-Muslim and Pakistan-based journalist and commentator.) 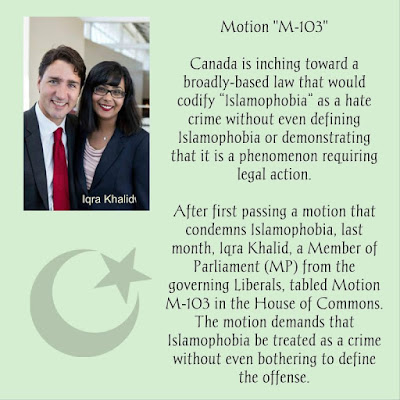