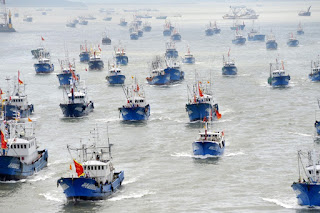 When a vast Chinese armada appeared outside the Galapagos Marine Reserve in South America earlier this year, Ecuador's Government sounded the alarm. They called in the big guns, asking the United States Coast Guard to help keep an eye on the enormous number of fishing vessels.

The sheer size of the fleet fuelled Ecuador's urgency: more than 350 Chinese fishing boats were detected, outnumbering its own navy and those of Peru and Chile combined. Lieutenant-Commander Christa Caldwell of the US Coast Guard, which sent a vessel down to the region to provide surveillance on the fleet, said the magnitude of fishing activity was unprecedented.

The flotilla was plundering waters that are among the most biodiverse in the world: the Galapagos Marine Reserve is home to the greatest biomass of sharks on the planet. Satellite tracking data showed the boats forming a near-perfect line along the boundary of Ecuador's exclusive economic zone (EEZ) — however the US Coast guard did not detect any of the Chinese boats cross over into Ecuadorian waters.

"The issue is that fish don't know borders," Lieutenant-Commander Caldwell told the ABC. Fishing in international waters is not illegal, even if those waters sit right beside areas of great ecological importance.

A map with satellite overlay showing the location of Chinese fishing boats near the Galapagos Islands EEZ in 2020. The Chinese boats gathered right at the edge of Ecuador's EEZ, close to the Galapagos Islands. And that's the real catch: even with a veneer of legality, these activities are potentially catastrophic for the environment and for local fish stocks.

Armed with huge Chinese Government subsidies, this massive fleet is now being deployed across nearly every ocean of the world — including on Australia's doorstep, with a new planned Chinese-funded fisheries development near Papua New Guinea's Daru Island, which lies in the Torres Strait.

China's distant water fleet is enormous even compared to that of wealthy nations like the US. Keeping the industry strong has been a priority for China's central government: in 2013, President Xi Jinping urged Chinese mariners to "build bigger ships and venture even farther and catch bigger fish".

Beijing says its distant water fishing fleet numbers around 2,500 ships, but one study claimed it could have as many as 17,000 boats trawling the world's oceans. The US, by comparison, has just 300 distant water vessels.

China is a fisheries superpower: according to the UN, it consumes around 36 per cent of total global fish production, and hauls in 15.2 million tonnes of marine life a year, or 20 per cent of the world's entire annual catch.

Its fleets, including those in the Galapagos, are vast and complex. There are trawlers, refuelling ships, freezer and transport vessels that allow them to continue operating without going to port for months at a time, sometimes longer. 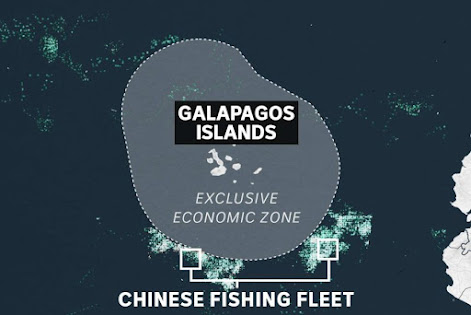 Ian Urbina, the author of Outlaw Ocean, has spent years writing about fishing on the high seas and says while illegal, unreported and unregulated fishing (IUU fishing) was an issue worldwide, China is unique.

"More than any other fishing fleet in the world, [China] travels farther, stays at sea longer, pulls up more fish than anyone, and is also more routinely invading national waters," he said. It's unsurprising then that China ranks number one on the IUU fishing index. The fleet is routinely found to be violating the law, targeting endangered shark species, falsifying licenses and documentation, as well as committing human rights abuses onboard its vessels.

And while United Nations maritime law mandates that fishing vessels are required to use a transponder to transmit their location at all times, Mr Urbina said many vessels deliberately switched them off. "Some of them are going dark for short periods, and what they're doing in those periods is unknown."

This year's flotilla was the biggest, but Chinese trawlers had been fishing in those waters for years. In 2017, the Chinese refrigeration vessel Fu Yuan Yu Leng 999 was pursued and boarded by Ecuadorian authorities inside the Galapagos Marine Reserve. On board, they found a gruesome haul: 6,000 frozen shark carcasses, many of endangered species, were seized.

A large number of frozen fish is found in a Chinese vessel, seized in the Galapagos Marine Reserve. The vessel's captain and crew were charged with a number of crimes.

Shark fins are a delicacy and a lucrative trade in Asia, but fishing for them and removing their fins is illegal in many jurisdictions, including Ecuador. Fishing ships have even been deployed in the contested South China Sea — although fishing does not appear to be the core objective there.

"The Chinese are using their fishing fleet to assert their presence in the South China Sea," said Tabitha Grace Mallory, an expert on China's fishing policies at the University of Washington. "In some cases [their] fishing vessels aren't even fishing, they're likely to be maritime militia vessels, which are getting paid to just assert some kind of presence in the area." 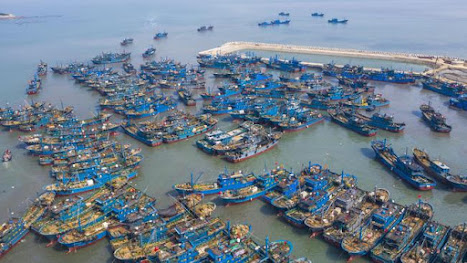 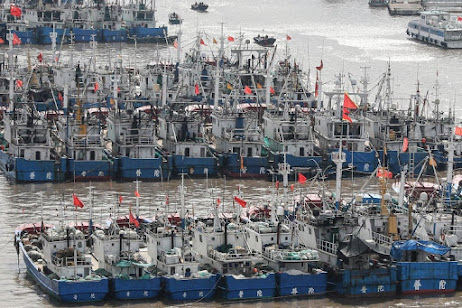