(Rohan Smith’s article from the NEWS.COM Australia on 23 December 2020) 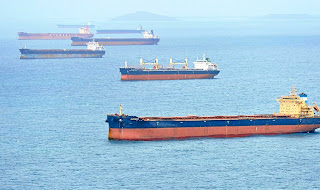 China’s ban on Australian exports backfires as city blackouts ordered: The decision by China to banish Australia and blockade crucial exports is having real-world consequences in cities around the country.

The provincial capital of Hunan and home to more than 7 million people is without street lights, too. Lifts have been switched off, forcing workers to scale dozens of flights of stairs to the office in the bitter cold. In Yiwu, a city of 1.2 million in China’s fareast, factories have slashed working hours by up to 80 per cent. When workers leave at night, the streets are dark.

The decision by Beijing in mid-December followed a months-long feud that has seen China ban exports from seafood to wine and timber. It is linked to a list of 14 grievances China filed with Australia. At the top of the list is the Morrison Government’s calls for an independent inquiry into the origins of the coronavirus which emerged from Wuhan in early 2020 and spread worldwide.

China viewed Australia’s stance as an insult and took action. President Xi Jinping has not spoken with Prime Minister Scott Morrison since, despite repeated attempts by Australia to end the tense stand-off. But as China enters a harsh winter, there might also be pressure from within.

The Financial Times reports dozens of Chinese cities and at least four provinces have imposed rules on electricity use that include residents and businesses cutting how much power they use. One of China’s largest energy groups told the publication: “The import curb is enough to change the industry landscape.”

>“Many local power plants depend on Australian coal due to its higher efficiency and now they are having trouble finding an alternative,” said the director of China Huadian Corporation. The New York Times reports the ban on Australian coal is having an unexpected impact as the relationship between the two countries goes “into free-fall”.

“Australia has, among other things, demanded an investigation into the origins of the coronavirus, which first emerged in China. China in turn has banned imports of Australian coal – leaving huge ships stranded at sea,” the Times reports.

China denies the situation is being exacerbated by a ban on Australian coal but a Chinese energy insider told The Australian: “You cannot pretend that bad relations between China and Australia haven’t contributed to this situation.”

The South China Morning Post also reports that coal prices have “skyrocketed since October to a level not seen since May last year”, with a spokeswoman from China’s National Reform Development Commission stating that: “We have noticed coal prices have risen recently and that has caused widespread concern in society.”

WHO declares a global health emergency as the coronavirus spreads across the world, after first being reported in Wuhan in December. In Australia, where there are nine cases, there are reports of racist attacks against Asian-Australians.

Australia extends a ban on foreign nationals travelling from mainland China first imposed on February 1 because of COVID-19. The Chinese Embassy in Canberra slams the “overreaction” and urges Australia to lift restrictions “as early as possible”.

The Government announces temporary changes to the foreign investment review framework that protects Australia’s national interest. Media reports relate the move to China, although no country is named. It follows reports of medical supplies being sourced and shipped in bulk from Australia to China.

Foreign Minister Marise Payne takes the international lead in calling for a global inquiry into the origins of the coronavirus pandemic, including China's handling of the initial outbreak in the city of Wuhan.

Chinese Ambassador to Australia Jingye Cheng suggests the Chinese public may boycott Australian products or decide not to visit Australia if the Government continues its push for an independent inquiry. Trade Minister Simon Birmingham labels the remarks "economic coercion".

Beijing imposes a massive 80 per cent tariff on Australian barley imports, saying the product has been imported against trade rules. The tax will stay for five years, and is expected to wipe out Australian sales - worth up to $1.5 billion a year - into China.

China says it is a "joke" for Australia to claim it has been vindicated by international support for a coronavirus inquiry after a European Union motion at the World Health Assembly (WHA) supported the move.

China's Ministry of Culture and Tourism urges people not to travel to Australia, citing a "significant increase" in racist attacks in the wake of COVID-19. Trade Minister Simon Birmingham says Beijing's claims are false and have "no basis in fact".

Australian Karm Gilespie is sentenced to death for drug smuggling after being arrested at Guangzhou airport in 2013 with 7.5kg of methamphetamine. Australian officials have raised his case with Chinese counterparts, but there are fears the 56-year-old has become a pawn.

Foreign Affairs Minister Marise Payne warns “disinformation” is being spread by China and Russia online to undermine western democracies during the coronavirus pandemic.

Prime Minister Scott Morrison announces a major increase in defence spending and a new military focus on our region, saying “we want an open, sovereign Indo-Pacific, free from coercion and hegemony”.

The Government issues a new warning on travel to China, saying Australians may face “arbitrary detention”. Australians in China who are considering returning home are told to “do so as soon as possible”. China responds by saying Australians have nothing to fear if they obey the law.

Australia suspends Australia’s extradition treaty with Hong Kong and makes visa changes to allow workers and students to extend their stay in Australia, including pathways to citizenship.

At a meeting with Foreign Minister Marise Payne, US Secretary of State Mike Pompeo praises Australia's stand against "coercive pressure from the Chinese Communist Party". Payne talks of shared goals to protect rule of law in the South China Sea, but says relations with Beijing are also important.

China launches an anti-dumping probe into Australian wine exports, making good on earlier threats to the sector. Trade Minister Simon Birmingham says our wine is highly sought after in China because of its quality. “Australian wine is not sold at below market prices and exports are not subsidised.”

Wang Xining, Beijing’s deputy ambassador in Canberra, gives a speech calling Australia treacherous and disrespectful, and says its actions on COVID-19 "hurt the feelings of the Chinese people".

China hits Australian winemakers again, launching a second investigation into the $1.07 billion trade to determine if the industry unfairly benefits from up to 40 government subsidies.

Foreign Minister Marise Payne reveals an Australian journalist working for China Global Television Network, Cheng Lei, has been detained in China for more than two weeks. Although she hasn't been charged, under Chinese rules she can be held for six months.

The Government reiterates the risk of "arbitrary detention" for Australians in China after two journalists - the ABC's Bill Birtles and the AFR's Michael Smith - are rushed to safety. They spent days sheltering in diplomatic compounds after local police demanded interviews with them.

More than 35,000 Australians, from singer Natalie Imbruglia to billionaire businessman Mike Cannon-Brookes, are revealed as targets for Chinese espionage after a database of names, addresses, and personal details is leaked.

Another farming sector is dragged into Beijing's attacks on trade, with reports China’s General Administration of Customs will apply “enhanced inspection” efforts on shipments of Australian wheat. Shipments already sold to China for December and January are worth approximately $250 million.

The Australian reports government officials had advised China-exposed businesses in Australia to “find other markets”, as reports in a Chinese state-controlled tabloid appeared to confirm unprecedented bans on Australian wine, lobster, copper, sugar, timber and coal.

>Treasurer Josh Frydenberg offers an olive branch, saying Australia is ready to re-engage in “respectful and beneficial” dialogue with Beijing, but China responds by releasing a list of grievances. "China is angry. If you make China the enemy, China will be the enemy," one official says.

The Australian reveals coal exports to China have plunged by 96 per cent in the first three weeks of November amid a go-slow by Chinese officials. More than 80 ships with cargo worth $1.1bn are stuck off the Chinese coast.

The Chinese Ministry of Commerce says Australian winemakers have been found guilty of dumping wine in China and harming its local industry. Tariffs of between 107% and 212% are imposed, with Trade Minister Simon Birmingham saying they make the Chinese market "largely unmarketable, unviable".

PM Scott Morrison calls for an official apology after Chinese foreign ministry spokesman Zhao Lijian tweets a mocked-up picture of an Australian soldier about to kill a child holding a lamb. He also asks Twitter to remove the tweet, which he calls “an absolute outrageous and disgusting slur”. 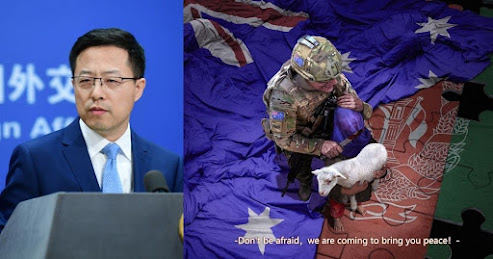 After China targets timber exports and more beef suppliers, cotton and wheat farmers are warned they are likely to be next in line, taking the total of Australian agricultural goods banned, disrupted by customs or hit by tariffs to more than $7 billion.

News emerges that Beijing has formalised its black-listing of Australia’s $14 billion coal export industry at a high-level meeting. Meanwhile, The Australian reports ASIO is investigating after it revealed Chinese Communist Party members had infiltrated Western embassies, including Australia’s.

Speaking with news.com.au earlier this month, Professor James Laurenceson, the director of the Australia-China Relations Institute at UTS, touched on the current predicament facing China and said the more restrictions that were imposed, the more Beijing risked hurting its own interest.

“For example, iron ore would hurt Australia the most, but if China hit that, it would shoot itself in the foot even more,” he said at the time. Dr Pradeep Taneja, who lectures at the University of Melbourne on Chinese politics and international relations, told the ABC last month that China knows exactly what it is doing and that more blockades were likely to follow.

“China’s strategy is to target suppliers from Australia who are then going to make a bit of noise and it is going to stay in the news,” he said. “I think Australia has been quite restrained. We haven’t seen any retaliation from Australia. We don’t have a trade war because it is one-sided. At the end of the day there has to be some sort of breakthrough.”

Relations reached an all-time low in late November when a Chinese government official published a doctored photo showing an Australian soldier killing an Afghan child. The picture was used to shame Australia after a damning report alleged Australians had committed war crimes in Afghanistan.

Mr Morrison demanded an apology from Beijing, but none was forthcoming. The Global Times, one of China’s most outspoken state media publications, wrote that China’s relationship with Australia was worsening.

“Australia has repeatedly used wrong words and deeds on issues involving China’s core interests and major concerns, which is widely regarded as the root cause of the relationship falling to its lowest point,” it wrote.