(This post is translation of news articles from the Opposite Eyes Blog.) 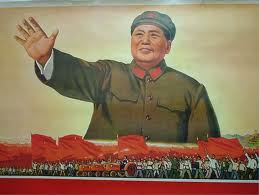 Last month just before the Burmese police’s napalming of the mob protesting against Chinese copper mine near Monywa U Aung Min the Special Minister for the President of Burma admitted openly to the people and media that Burmese Government was really scared of China Bear right across the north-eastern border.

He even recalled the un-declared Border War, more than 20 years long, between Burmese Army and Chinese-sponsored CPB (Communist Party of Burma) from 1967 to 1989. Big Bad China can and will do nasty things against our country just simply by starting another war where they don’t even need to fight. Burma has so many ethnic insurgents who are willing to fight as the proxy for China. And KIA (Kachin Independence Army) is just one of them. 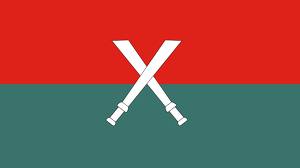 And that exactly is what has been happening with the KIA Kachins since last year. They are now fighting a nasty proxy war for China. The bastard KIA generals force local Kachins and Shans into their insurgent army on the China border, equip them with Chinese-supplied free weaponry, and then send the poor bastards back into Burma to fight against the army. Chinese even provide them with free food ration straight from PLA (People Liberation Army) prepacked and delivered.

(Minister U Aung Min admitting China is the scary Bear across the border.)

Well before 1988 KIA strategically allied with CPB just to receive free arms and ammunitions and land-mines from China through CPB. When CPB spectacularly collapsed in 1989 KIA was basically forced to make peace with Burmese army.

Late KIA Chairman Branseng once remarkably said that there were only one million Kachins and more than 40 millions Burmese in Burma and even if one Kachin could kill 10 Burmese before he was finally killed there would still be 30 millions Burmese left standing after every Kachin was killed.

Back then KIA knew very well that once CPB was gone all the Burmese army divisions fighting CPB would come after them. So they made peace with Burmese till the time the changing geo-political situation has allowed them to fight the Burmese again with the backing of China bear across the border.

China needs another lapdog militia like CPB to play in Burma’s politics. And to influence and control the KIA they have been allowing KIA to earn a great deal of money by letting Chinese companies do business direct with KIA generals last 20 odd years.

China knows very well that Burmese Generals do not trust them and the Chinese leadership accepts the reality that they do need KIA as a buffer militia when Burmese are behaving well, or as a proxy army to fight if Burmese are going too far against China.

Burma re-establishing the full diplomatic relation with US and also unilaterally suspending the Chinese Myit-sone Dam Project are the red flags for Chinese to realise the obvious that Burmese generals are rebelling. And now China has unleashed their war-dogs KIA like they did with CPB in 1967 just after the Burmese mobs slaughtered thousands of Chinese in Rangoon’s Chinatown.

And the evidences of full-fledged Chinese support to KIA are everywhere to be seen. Chinese mobile phones and landlines are easily used widely in the KIA-controlled territory, even in the jungles. Their advances in telecommunications and information technologies have even surprised the Burmese army officers fighting KIA on the front-lines.

“At first we looked down on them as just ethnic insurgents in the jungle. They are not! Chinese have given them a very advanced IT system among many other supports. They've got WiFi internet in the jungle. They could instantly send the casualty details from both ours and their side together with photos and even videos back to their HQ in Laiza, and then onto the YouTube and Face book,” commented one senior front-line officer from Burma army.

“Nobody except the PLA can provide that sort of technological support to the KIA. They are well equipped with latest Chinese small arms and also heavy weapons like recoilless rifles and heavy mortars. The dried-food-rations we captured from them are all Chinese-made with Chinese labels and packaging. We’re facing not KIA guerrillas but a CPB-like well-armed army now!” added the same army officer.

To strengthen their manpower further KIA has been establishing a so-called Rohingya Battalion of Bengalis from Bangladesh and North-Arakan with the tacit support of their Chinese backers. Christian Kachins and Muslim Bengalis, willingly supported by the godless-Communist Chinese, are now fighting the Buddhists Burmese. 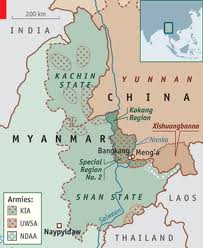 The renewed Kachin war has been going on for well over a year now. During that period China’s policy towards Burma has been flip-flopping from friendly to hostile.

Previously China did block KIA personnel from entering China but recently, as Burma is becoming more and more friendly towards the US-led West because of democratic reforms and political changes, China has been protecting KIA first and then outright supporting militarily.

On March 17 this year KIA forces coming through China attacked Burmese Border Guard Forces at Border-post (La-6). The Chinese border guard police there completely ignored the event and even removed themselves temporarily from their post on the border to facilitate the KIA’s attack.

Around May 5 this year a KIA brigade attacked the Burmese Border Guard Force at Panwar by using Chinese territory as a jumping point into Burma. KIA forces were repelled by the Burmese army and the attackers retreated back into China.

Even though Burmese had protested against KIA incursion the authorities on Chinese side allowed the KIA forces to stay on and recuperate on Chinese territory. The local authorities at the China’s Sakyi border Village in Htain-Chone Province even took care of KIA wounded and sicks and later transported them to the Tonpan Hospital at Htain-Chone Town. 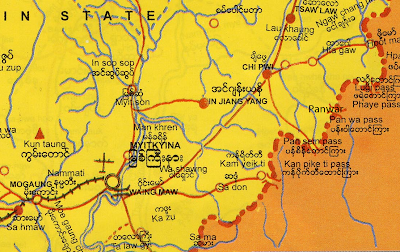 Again on May 26 Chinese authorities allowed a 50-strong KIA unit to occupy a fire-watch-tower inside China at only 500 yards from the border-post and send a prolonged heavy-weapon barrage onto the Burmese army positions across the border.

On every occasion Burmese army has refrained from firing back into China or incurring into China to avoid untoward diplomatic incidents as a good neighbour. But China so far is behaving   like a big bad neighbour and creating instability in the border region.

China should respect Burma’s sovereignty and should not interfere in Burma’s domestic affairs. But China simply is creating instability in Burma by supporting the KIA Kachins to wage a war inside Burma so that Burma will not be easily influenced by the US-led West Bloc.

China basically is just a Big Bad Neighbour for Burma!

KIA Raided Karmine Town While US Ambassador was in Myitkyinar 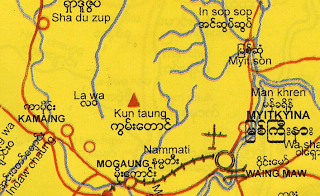 On December 18 last Monday Dereck Mitchell the US Ambassador to Burma arrived in Myitkyinar the capital of Kachin State as a short visit to meet local authorities, political parties, and peace activists to find out more about the ongoing Burmese-Kachin war and worsening refugee situation.

And our friendly KIA welcomed him to their Kachin Land by violently raiding the nearby town of Karmine and gladly killing the policemen and happily murdering innocent civilians. At early morning that Monday an 80-strong KIA unit fired more than 40 rounds of their heavy weapons onto the Karmine Police Station manned by only 18 poorly-armed hapless policemen.

KIA men then entered the town and killed Police-sergeant Soe Min Thu and civilian women May Mhway Mon and Tin May Aung (the mother and the sister of Police-lieutenant Aung Htun Oo). They also destroyed the Karmine bridge spanning the Indaw Creek just outside the town.

KIA was just simply letting the US Ambassador know that if they wanted to they could raid any town in the Kachin State and the Burmese army and the United States couldn’t do a thing to stop them.

The big bad wolf China is now standing behind them with a million-strong PLA’s South-western Division nuclear-armed and ready on the Border to protect China’s strategic interest in Burma and ultimately in the Indian Ocean.

Watch out America and India, you can’t contain Chinese Dragon that easy!


Related posts at following links:
1411 Duel between Thameinbayan and Garmani
Posted by Hla Oo at 12:35 AM