Of special interest to Thais as the conqueror of Ayutthaya Kingdom in 1569, the facts about King Bayinnaung are however surrounded by myth and folk tales. Thai historians gathered recently to hear Burmese scholar U Thaw Kaung deliver a paper on the life of the man considered to be Burma's most influential ruler. Subhatra Bhumiprabhas reports.

Authors may go to great lengths to avoid overt bias but historiography is always subjective. The victors and the vanquished write widely differing accounts of the same war, downplaying or omitting to mention failures, exaggerating or inventing successes.

So commonplace a phenomenon that scepticism has long been a necessary companion on any journey into the past. Much less common is the sight of former traditional enemies meeting, centuries after the event, to try and separate fact from falsehood, truth from folk tale.

The war in question ended in 1569 with the conquest of Ayutthaya by the armies of Bayinnaung, king of Toungoo, Pegu (aka Hongsawaddy) and Ava. The Siamese kingdom was to remain under Burmese suzerainty for the next 21 years; its titular ruler, Maha Thammaracha, subordinate to the regional superpower to the west.

Descendants of the two "warring sides" were rather unevenly matched at a one-day symposium held at Thammasat University earlier this month. In fact, U Thaw Kaung, former head of Rangoon's Universities Central Library, was the only Burmese representative present. Thai historians turned out in force, though. They had come to hear Thaw Kaung deliver a paper on the life of King Bayinnaung and to share Thai perspectives on the monarch many Burmese regard as the most illustrious leader in their long history.

Quite apart from the humiliating defeat he inflicted on Ayutthaya in 1569, generations of Thai schoolchildren know Bayinnaung as the Burman monarch who, five years before that date, took Maha Thammaracha's son, Prince Naresuan (later King Naresuan the Great), back to Burma as a hostage for his father's good behaviour. More recently, Thais have been made aware of the fact that Naresuan was allowed to return home in 1572 only after his sister, Princess Supankalaya, had been presented as a bride to Bayinnaung.

On this last point, Dr Sunait Chutintaranond, a respected Thai historian and director of the Thai Studies Centre at Chulalongkorn, notes: "According to Burmese chronicles, Bayinnaung has three senior queens and 42 lesser queens who each had a child with him. The chief queen was King Tabinshwehti's sister. The second queen ... her name was Canda Devi ... accompanied him when he led the attack on Ayutthaya [in 1569].

Among his 42 lesser queens, one was mentioned in a more recent Burmese chronicle [Mahayazawinthit; written in the late 18th century]. It said that she was the elder sister of the king of Ayutthaya and that her name was Amyo Yonge. She bore King Bayinnaung one daughter."

Older Thais may remember Bayinnaung as the hero of Phu Chana Sibtit (Conqueror of the Ten Directions), a historical novel by "Yakhob" (pen name for Chot Phrae-phan) which was first published here in 1938.

In the book "Chadet" (Bayinnaung) is portrayed as a fearless, gentlemanly and very handsome warlord. The novel romanticises his marriage to "Chantra", elder sister of King Tabinshwehti (his predecessor; founder of the Toungoo dynasty), and notes that it was this monarch who gave him the name by which he is best known today (Bayinnaung means "the king's elder brother").

Interestingly, in Burma too, myths and folk legends about the man have become intertwined with information corroborated by various sources. For the past year Thaw Kaung and a colleague in Rangoon have been translating Hanthawady Hsinbyu-myashin Ayedawbon, an ancient history of Burma which covers events up to about two years before Bayinnaung's death in 1581. "We don't know much about his genealogy because it wasn't mentioned in the main chronicles," said Thaw Kaung.

Then there are the inscriptions in Pali, Mon and Burman on a huge bronze bell at Shwezigon Pagoda in Pagan. They cover events in the first few years of his reign (January 11, 1551 to May 23, 1557) but say nothing about his ancestry.

However, according to a popular legend in Burma, he was the son of a lowly "toddy-climber" (a labourer hired to harvest the fruit of the toddy palm). About 150 years after his death, a man named U Kala wrote the first comprehensive chronicle of Burmese kings (Maha Yazawin-gyi) in which he implies that Bayinnaung was descended from Toungoo royalty.

"But then," noted Thaw Kaung, "U Kala could not have written, even if he had wanted to, that Bayinnaung was not of royal blood. He was living in the reign of a direct descendant of this great king and he wouldn't have dared cast doubts on the [purity of the] royal lineage." 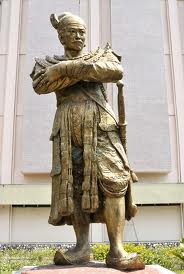 Other texts Thaw Kaung has come across claim variously that Bayinnaung's parents were commoners from Nga-tha-yauk in the Pagan area, or from Hti-hlaing, a village in Toungoo district. "I've come to realise that many Burmese writers have mixed fact and fiction," he said, going on to remark that "Yakhob" may have done the same in his novel Phu Chana Sibtit.

He also mentioned another, questionable, source: A book, published in 1906, entitled Athtoke-patti htu (Distinguished Lives). Its author claims that before Bayinnaung succeeded Tabinshwehti as ruler of Toungoo, he fell in love with Hne Ain Taing, a beautiful young widow of Mon ancestry who had one son from her previous marriage. She was apparently bearing Bayinnaung's child when he was called back to the capital on urgent business.

After his coronation, she is said to have turned up at his palace accompanied by two young boys but the king pretended not to know her. "This little book clearly belongs to the oral traditional of the century before," Thaw Kaung said. "However many popular writers [in Burma] got their material on Bayinnaung's childhood and youth from this book."

This inability to conclusively prove Bayinnaung's parentage was put to good use during Burma's struggle to gain independence from Britain in the 1920s. In an attempt to stir up nationalism and patriotism among his compatriots, U Po Kya, a well-known author of history textbooks, claimed that Bayinnaung had risen from among the "common people"; that he had been born to a peasant family in the Pagan area. The book was distributed in primary schools around the country.

"Perhaps," ventured Thaw Kaung, "he wanted the young Burmese students of the 1920s and '30s to get the idea that anyone could achieve eminence and become a great leader and conqueror if he was brave, hard-working, willing to take risks and to strive earnestly for the good of the country and the people."

And vestiges of this manufactured image of King Bayinnaung seem to have endured to the present day. In 1990, work began on reconstructing Bayinnaung's palace (Kamboza Thadi) in Pegu. A statue of the revered monarch was erected in Tachileik district five years later. Today the palace and statue are popular tourist attractions.

"I'd say that the image of Bayinnaung is very universal. He's the king of kings. He's an important part of Burma's historical heritage but he also symbolises the power of nations in the Southeast Asian region because of his international reputation as a strong warrior king."

According to Thaw Kaung, Bayinnaung ensured himself a permanent place in Burmese history books by firmly establishing the Toungoo dynasty and by uniting what had been a collection of fractious little kingdoms and city-states into a dominant power in the region. "He will also be remembered as the king who extended the frontiers of our country to their farthest extent ... to parts of [what are now] northern Thailand and Laos."

U Thaw Kaung presented his paper at a symposium held on March 1 at Thammasat's Faculty of Liberal Arts. The event, organised by the Southeast Asia Studies Project, was entitled "Bayinnaung, Conqueror of the Ten Directions, from the Burmese Perspective". Dr Sunait Chutintaranon is soon to launch the third edition of his Thai-language biography of Bayinnaung.

( Blogger Notes: King Bayinnaung was the only Burmese king Thais looked up to as a hero. Indeed he's the only Burmese ruler who won Thai hearts. His victories, military prowess, and heroism are well recognised by Thais and even captured in a bestselling Thai novel called "Phoo Chana Sip Thid" "The Victor of Ten Directions".

When I first came to Thailand in 1984-85 almost every Thai I ran into asked me of King Bu-yin-naung once they knew I am a Burmese or Pha-ma as Thais call us Burmese. And I was pleasantly amazed that Thais know very well our famous king Ba-yin-naung.

Following videos from Youtube are various variations of the famous classical Thai song “Phu Chana Sip Htit - Conqueror of the Ten Directions” about our beloved King Bayinnaung derived from that 1938 Thai novel bearing the same name.)

(Phu Chana Sip Htit - Conqueror of the Ten Directions.)
Posted by Hla Oo at 1:43 AM