WASHINGTON-- U.S. Sanctions Myanmar Lawmaker Ahead of Obama Visit. The U.S. has imposed sanctions on a Myanmar lawmaker and businessman linked to attacks on Myanmar's democratic opposition.

The new sanctions, announced Friday, come days before President Barack Obama is scheduled to visit the Southeast Asian country, also known as Burma, as part of a gathering of regional leaders.

The new sanctions will require U.S.-connected firms and individuals to freeze the assets of Aung Thaung, a current member of Myanmar's lower house of parliament and former industry minister and army officer.

The U.S. Treasury Department in a statement blamed Aung Thaung for working to undermine recent economic and political changes in Myanmar and said he has been implicated in previous attacks on the country's democratic opposition. Myanmar embassy staff in Washington didn't immediately respond to a request for comment on the sanctions.


"By intentionally undermining the positive political and economic transition in Burma, Aung Thaung is perpetuating violence, oppression, and corruption," said Adam J. Szubin, the director of the Treasury Department's Office of Foreign Assets Control. "The United States firmly supports the Burmese Government's progress on reforms, and we remain vigilant about targeting those whose activities facilitate repression and dictatorship."

The U.S. removed some of the sanctions aimed at the previous military government in 2012, but U.S. citizens and companies still face restrictions in the country. A steady stream of senior U.S. officials has visited the country this year, culminating with Mr. Obama's visit next month.

"The administration is sending a strong message that people in the government who aren't committed to the transition process are going to face consequences," said John Sifton, Asia advocacy director at Human Rights Watch. " This is about messaging ahead of the trip."

The foreign policies of the U.S. and Europe toward Myanmar have been heavily influenced by Ms. Suu Kyi's political experience there, including her house arrests. She was last detained in 2003, after a pro-government mob attacked her entourage and killed many of her followers during a tour of northern Myanmar.

The U.S. and European Union eased sanctions against Myanmar only after the 2012 by-elections, in which her party took part for the first time since 1990 and won 43 out of 45 seats available.
Since Myanmar's dramatic turn from military junta to a nominally civilian government in 2011, the country has moved to diversify its foreign relations, embracing Western nations such as the U.S. and the U.K. at the expense of its once- closest ally, China.

Head to Head With a Burmese Hardliner

Aung Thaung is a Burmese hardliner with major connections. A former military general and minister of industry under Burma’s old military junta, he is among the country’s wealthiest businessmen and a Parliamentarian, and he has close ties to former dictator Sr-Gen Than Shwe, who he met while serving in the Burma Army. The two men reportedly ate breakfast together when the military was still in power.

Despite his political connections, or perhaps as a result of these connections, Aung Thaung has not escaped negative press. Under the former regime, he was accused of involvement in attacks against opposition leader Aung San Suu Kyi and other members of the National League for Democracy (NLD) party.

In the most famous incident, the so-called 2003 Depayin massacre, members from the Union Solidarity and Development Association (USDA), now the ruling Union Solidarity and Development Party (USDP), attacked a motorcade of the democracy icon and her followers, leaving about 70 people dead. A group of thugs, criminals and ex-convicts known as Swan Arshin were thought to be involved.

Today, Aung Thaung is known as a hardliner in Parliament, where he represents the military-backed USDP. He says he promotes Burma’s transition to democracy, but the negative press has continued. Earlier this month, The Straits Times newspaper of Singapore published a report which hinted at his possible connection to recent anti-Muslim riots in the country—including in Shan State’s Lashio town and Mandalay Division’s Meikhtila town.

The report described the emergence of a new Buddhist military known as the “Taung Tha army,” and noted that Taung Tha is a town in Mandalay Division “which happens to be home to the notoriously hardline Aung Thaung.”

In a rare, exclusive interview, The Irrawaddy met Aung Thaung and asked some tough questions about allegations of his involvement in recent anti-Muslim unrest; his relations with the controversial nationalist monk U Wirathu, who is at the helm of the 969 movement to shun Muslim businesses; and his close relationship with Burma’s reformist President Thein Sein. 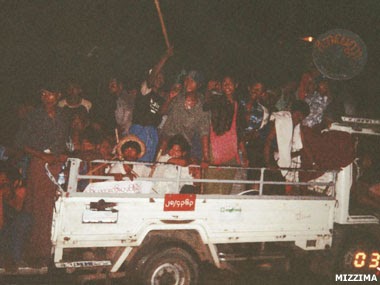 Question: The Straits Times describes the current religious and racial conflict in Burma as a reflection of the handiwork of Taung Tha groups, and Taung Tha is your hometown. The article also says you have connections with members of Swan Arshin who attacked monks after the [2007 pro-democracy] Saffron Revolution and who were part of the Depayin plot. Will you comment on these allegations?

Answer: It’s nonsense. The article makes it sound like I don’t want our country to continue along the path to democracy. We have already transitioned from a military junta to a democracy because we’re serious about developing this country. And we’ll keep going. … I presume that whoever offered this description [in the article] did so in order to tarnish our dignity. You can investigate as you wish. If their allegations were found to be true, even the tiniest bit true, they could say whatever they wanted about us. But if the situation was not as they described, would they be happy to be prosecuted?

The incidents in Meikhtila and Lashio were described poorly. Likewise, the Depayin issue. It was described without firm evidence. I’m not sure what they were talking about. Last month, I wasn’t able to go to the regional states. I wasn’t able to talk with anyone or direct anyone. You can go to Taung Tha and ask anyone you meet. I also have my own personal problems—I’m getting old too, and my wife, who has been suffering from cancer for four years, has been in very bad condition.

Q: It is widely accepted that Swan Arshin is linked to the current unrest. It has also been written that the incidents in Lashio and Meikhtila were systematically planned. What do you say of this?

A: I have never formed an organization, even in the days of the military regime. I didn’t form the USDA. And I don’t have the right to form any association. As I am from the USDP, I am involved in political affairs, and I won’t behave in a way that would cause the public to misunderstand me or look down on me.

Q: You’ve been criticized for shaking hands with U Wirathu, who was recently released from prison. [The monk who now leads the 969 movement was jailed about a decade ago for inciting religious unrest]. What are your thoughts on that?

A: Masoeyein is a monastery [in Mandalay] that I often visit. He [U Wirathu] is from Masoeyein. When I went there, U Wirathu allowed us to meet him. I was with about 25 members of the USDP, and around 50 monks were standing in my vicinity. I just listened to U Wirathu and then I left. A monk like U Wirathu won’t listen to what I say, so I just had to say, “Yes, abbot,” and leave without saying anything to him.

Q: According to the Straits Times, U Wirathu gave an anti-Muslim speech about 50 kilometers from Lashio just before violence in Lashio broke out. Can you comment on this connection?

A: I have only met and spoken to the abbot once, and that meeting only lasted about 20 or 25 minutes. I haven’t had any later contact with him. So I don’t know anything about the allegations in the article, that he was just 50 kilometers from Lashio.

Q: Political analysts have said that if President Thein Sein cannot tame those who are pro-violence, his political reputation will gradually decline. What do you think of Thein Sein’s attempts to control the violence?

A: Those things have been written to make the situation worse. U Thein Sein is our president, and I’m personally very close to him. He is my colleague as well. He is a very honest man, and he was also my comrade when we were on the frontlines [in the Burma Army]. Despite the fact that he is not healthy, he is doing a good job with everything. [The president is known to have a heart condition].

However, there may have been some mistakes because he tends to administer and direct others—he doesn’t manage everything personally. What he does is the task of our party. I need to support that. In Parliament, too, I am responsible for promoting democracy and stopping actions that turn back to the old ways. I have nothing to say so far regarding his management. Since he has a lot to do, some of his management may seem weak. That’s understandable.

Q: Before the violence, it was widely heard, even in Parliament, that the military’s role [in politics] should be reduced. Committees were formed to amend the Constitution [which guarantees 25 percent of Parliament seats to the military]. Then violence broke out. Some critics say the violence could hint at another possible military coup or a bid to promote the role the military. 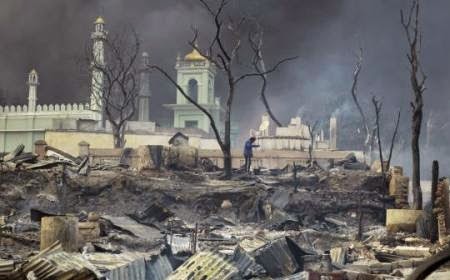 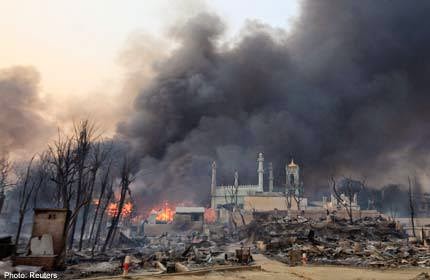 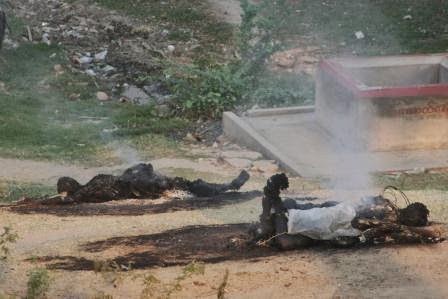