(Feature article direct from the COCONUTS BKK on 8 October 2014.)

Universal doubts cloud ‘perfect’ Koh Tao murder investigation! For weeks popular speculation ran deep police that would finger Burmese migrant workers for the murder of two foreign tourists on Koh Tao, and when it came true on Friday, you could almost hear the groans.

An investigation which came out of the gate “focusing on migrant laborers” before moving on to a British friend of the deceased and “especially Rohingya” and even influential “mafia figures” for a time, eventually came full circle to three migrant laborers implicated by no more than circumstantial evidence, an alleged DNA hit and a now-recanted confession.

Along the way the investigation accumulated numerous accounts of witness torture, bribery, bizarre claims and threats. However, after so many missteps, questionable statements and by all appearances a totally shambolic investigation, there was one big problem for the police who’ve been under intense pressure to show results: No one bought it.


Not the international audience; not the domestic audience. In fact so many voices of skepticism or downright disbelief have erupted since Friday that police Tuesday resorted to threatening prosecution of anyone who challenged their conclusions, saying they would charge dissenters with “insulting officials.”

Since the bodies of David Miller and Hannah Witheridge were found on the idyllic island last month, trying to keep apace of developments has been like managing schizophrenia. Just yesterday, Thai police announced that Burmese embassy officials were “satisfied” with their investigation.

At the same time, reports filtered out from Burmese media that an embassy lawyer had in fact described it as a “set up” after the two men, Zaw Lin and Win Zaw Htun, revealed bruises they said came from torture and recanted their confessions.

“They said they didn't do it, that the Thai police (along with their Burmese-Thai translator) beat them until they confessed to something they didn't do,” said Attorney Aung Myo Thant of the Burmese Embassy. “They're pleading with the Burmese government to look into the case and find out the truth.”

Meanwhile an online petition urging the Government of the United Kingdom to independently investigate the horrific murder of its citizens has drawn more than 43,000 signatures by Thai nationals and people around the world.

We do not know what happened in the early hours of Sept. 15 on Koh Tao. However the burden of proof, by no fault of a “reasonable” understanding of events, lies squarely on the shoulders of the police, who’ve been accused not once but numerous times in recent days of misconduct, including bribing a taxi driver and torturing a Thai man for not providing false testimony and otherwise compelling results to bring the case to a convenient close.

“They [the police] beat all of us while interrogating us. Three of us were seriously injured. But some got minor injuries,” Burmese Worker Than Hlaing told Irrawaddy on Monday. “They detained us for one night. They collected our records and took pictures of us. [Then] they finally told us that we were not guilty and released us.”

The cloud moves in 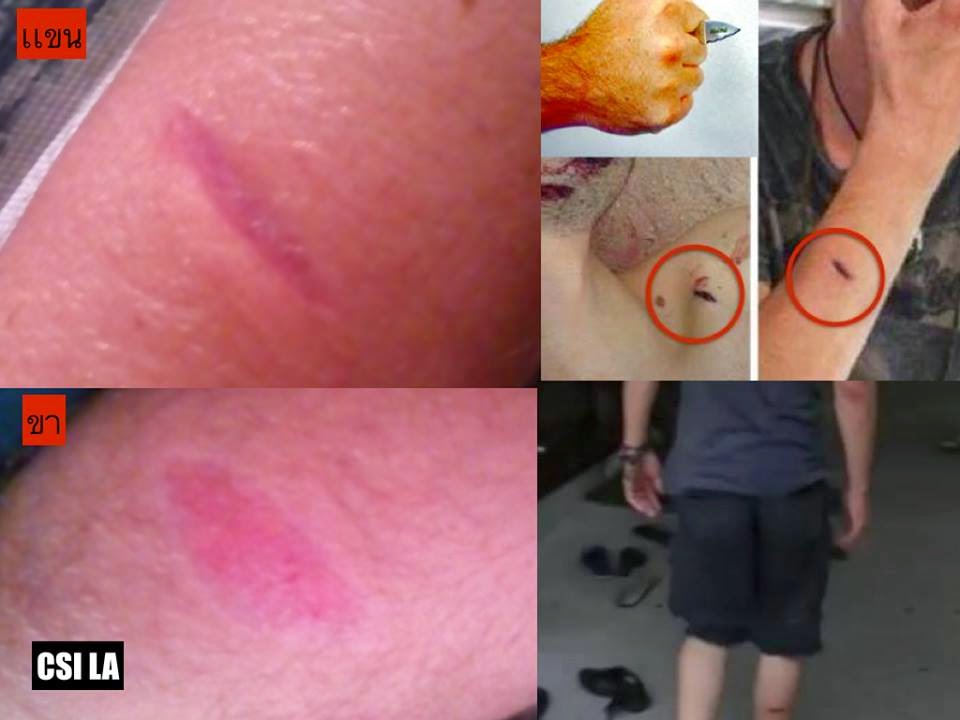 In recent days the widespread doubt has prompted an army of keyboard  detectives on sites such as CSI LA to fumble for answers themselves. Operated by a Thai resident of the United States, the Facebook group has been followed by more than 220,000 people, as the community makes ongoing efforts to piece together what happened from evidence released to the public.

Loopholes and inconsistencies in the investigation have been pointed out, urging explanations from the authorities such as the questions about minor wounds on Miller’s head and shoulder, which appear less severe than those on Witheridge, as if caused by a push knife rather than a hoe, as argued by police. Police refute that.

Internet speculation turned to the cut on David Miller’s shoulder (top left) as compared to that Sean McAnna (middle), a Scottish man who said he was threatened with death by Koh Tao “mafia” figures who wanted him to confess. Source: CSI LA

The same type of wounds, it’s pointed out, were visible on Sean McAnna, a Scottish man who worked as a musician on Koh Tao and fled the island claiming he was hounded by local “mafia figures” to confess to the murders or be killed. 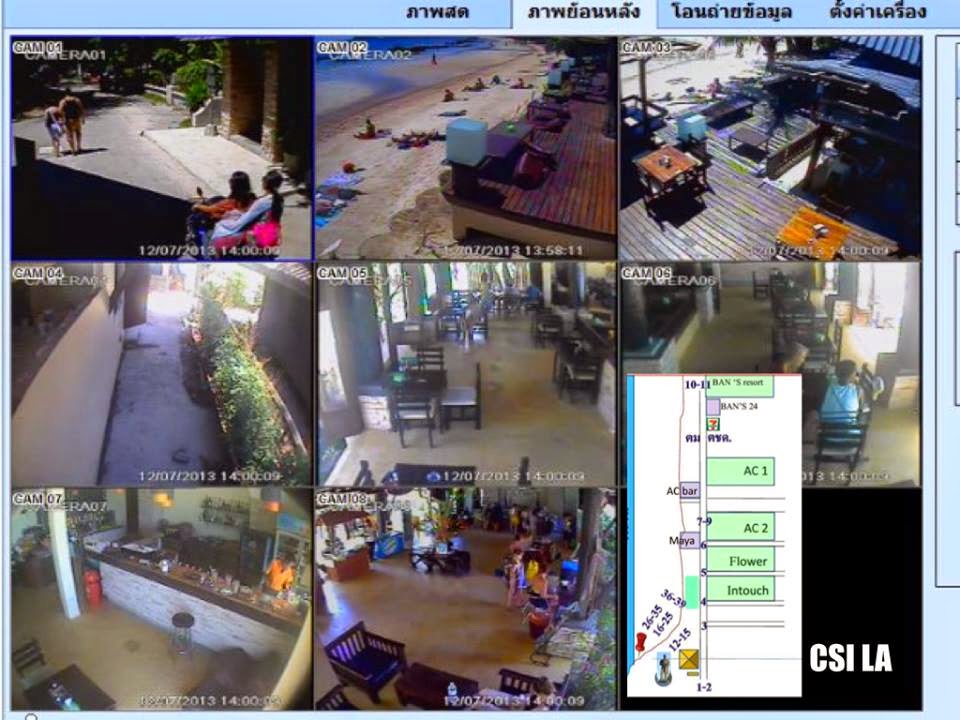 (This is a CCTV camera samples from CCTV cameras at the restaurant Turtle Island beach front restaurant with a camera shining towards the beach. But why CCTV cameras from AC outlet AC, BAR 2, Flower, Maya and In Touch to catch what is not an example of This CCTV system in one of the Koh Tao from the beachside restaurants restaurants Usually. CCTV and cameras have several bars to the point that How come those CCTV footages. beach weren't a part of the investigation, it Could be "AC2 AC BAR, Maya, and belong to one family In Touch?)

Photographs purporting to show the accused men’s interrogation was translated by a Rohingya translator, who actually is a Roti-seller on Koh Samui. Source: CSI LA

“Right now, I don't ask for anything much from those who have power. All I ask for is ‘transparency’ of David & Hannah's case,” the admin of CSI LA wrote. “Right now it is a golden opportunity for those who have power to set an example for our society. … Please don't let Thailand's reputation, tourist industry and millions of Thais suffer from humiliation just because the lack of ‘transparency.’”

On Tuesday police were forced to respond to some of the inconsistencies in their public account.

After saying they’d found Witheridge’s phone in one of the suspect’s rooms, a claim apparently discounted by photographic evidence, police walked it back to change their story. They said it was Miller’s phone, according to Khaosod English.

Photographs appear to show the mobile phone of Hannah Witheridge submitted to police by her friends, despite police claims it was found in one of their suspect’s possession. Photo: CSI LA.

Authorities remain steadfast in their conviction they’ve found those responsible. Recently appointed national police chief Somyot Poompanmoung on Tuesday defended the investigation in the face of the torture claims by the accused. "I insist that all officials in this case have done a good job; a perfect job" Somyot said, according to the Bangkok Post.

A lead investigator dismissed suggestions of investigatorial misconduct. "In an investigation, it is impossible that there are no questions raised,” said police Maj. Gen. Suwat Chaengyodsuk. “There will always be minor doubts and points, but would these (points) have enough weights to change the evidence, witnesses or the entire case?"

Suwat, deputy commander of Metropolitan Police Bureau leading the investigation into the murders, spoke Monday during an appearance on the Jor Kao Den television program to clear up “confusions” raised in social media.

"The investigation focused on transparency and forensic examination,” he said. “We collected footage from 106 security cameras and tested the possibility of people living within 600 meters in diameter from the crime scene."

Doubt from all corners 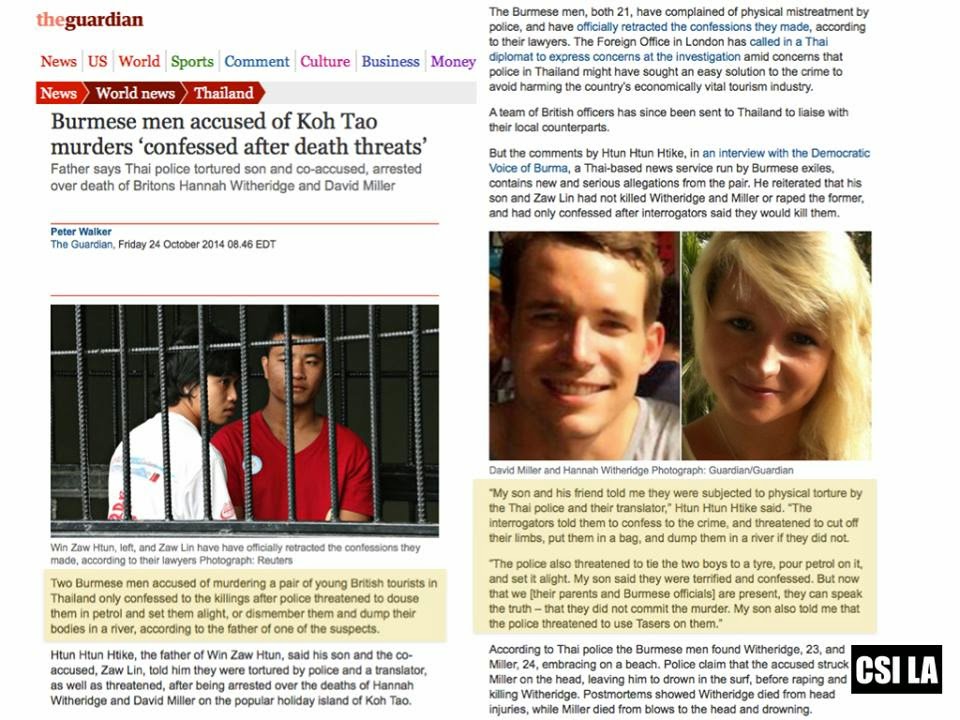 But all along the merits of a professional investigation have seemed secondary to protecting image. Daily news reports proclaiming progress – bizarrely described at one point by the lead investigator as precisely “85 percent complete” – have routinely segued into shameless exhortations about the resilience of tourism.

“Meanwhile, local officials in Surat Thani said yesterday that tourists were returning to Koh Tao resort island in droves after the alleged culprits in the murders of British tourists Hannah Witheridge and David Miller were arrested,” The Nation reported Sunday.

Local media haven’t bought it either. Channel 3 news reporter Jaturong Sukka-iat has openly expressed his doubts about the case.

“The suspects were arrested because of circumstantial evidence … based on CCTV footage, and no one knows whether their DNA actually matched,” he said. “The main evidence is footage of them in a 7-Eleven. The murder happened on the beach. Where are the witnesses? I suggest you should be careful when going to 7-Eleven.”

Jaturong was optimistic the legal process would lead to the truth.

“Despite their confessions in the questioning process, they can say the opposite in the trial. Even though they don’t speak Thai, they must have known murdering two people would lead to a death sentence,” he said. “Why would they continue to live in Koh Tao for 20 more days?”

The police statement fits a classic misunderstanding of rape as an act of sexual passion, not an act of premeditated violence, as experts say is most often the case. “Rape is a premeditated act of violence, not a spontaneous act of passion,” according to the University of Minnesota.

Not to mention that forensic evidence did not recover any of Miller’s DNA from Hannah’s body. “We did not conclude this yet. Maybe he was wearing a condom,” Suwat said. He said a used condom was recovered from the crime scene but was “too contaminated” to recover male DNA. But DNA from Hannah was found, he said.

Whoever killed Miller and Witheridge, the public seems unwilling to accept anything short of definitive evidence, and the bar has been raised higher than usual in light of so many investigative missteps.

On Tuesday, 850 pages comprising the investigation file and questioning of the suspects was submitted to Koh Samui prosecutors for approval to bring the case to trial. The suspects could face the death sentence.

Justice is a scarce commodity in a world where rich young men can get wasted and run over and kill policemen in their Ferraris without consequence, and young women get a slap on the wrist for sending a van full of people plunging to their deaths.


Thailand is in a time of change, and it has been hoped the ghosts of injustices past would be put to rest. For the sake of the victims’ families and as a message to the world it’s not just “business as usual,” we hope it’s not too late. 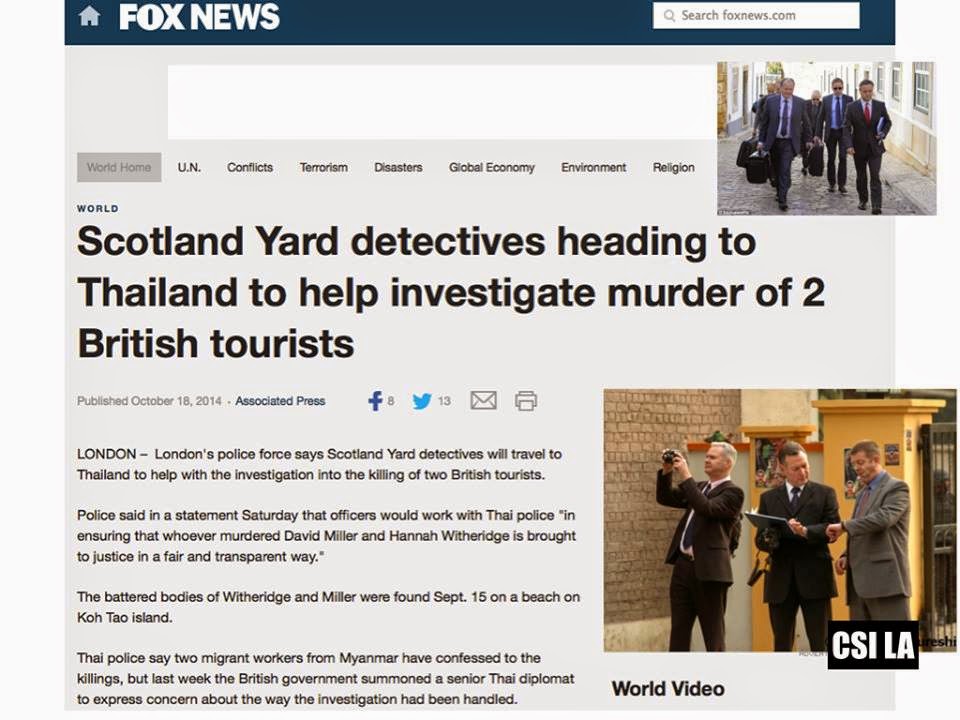 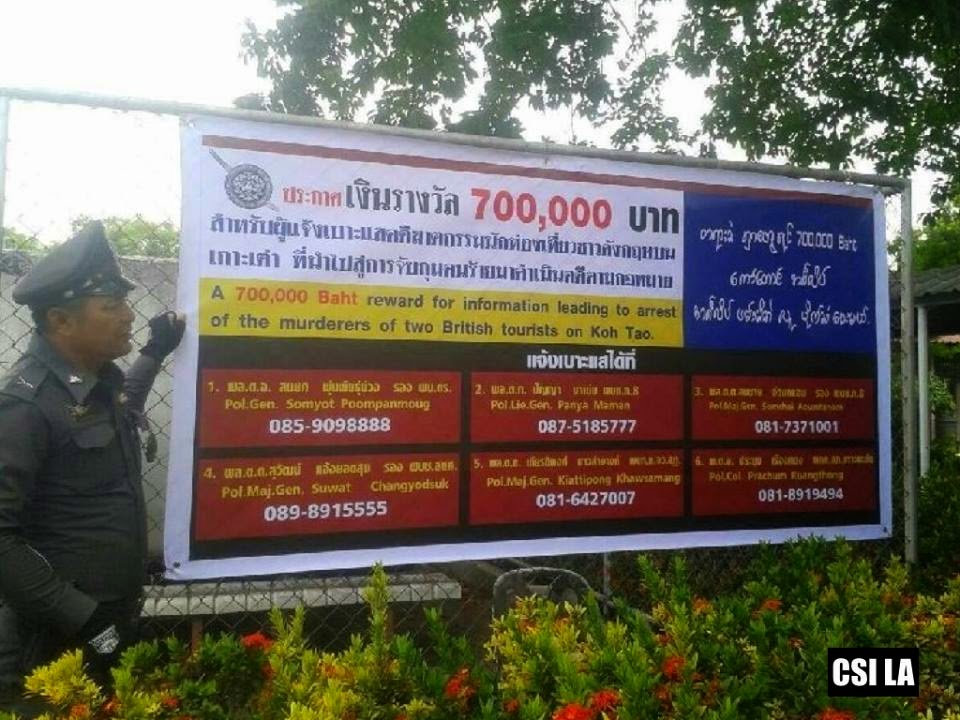 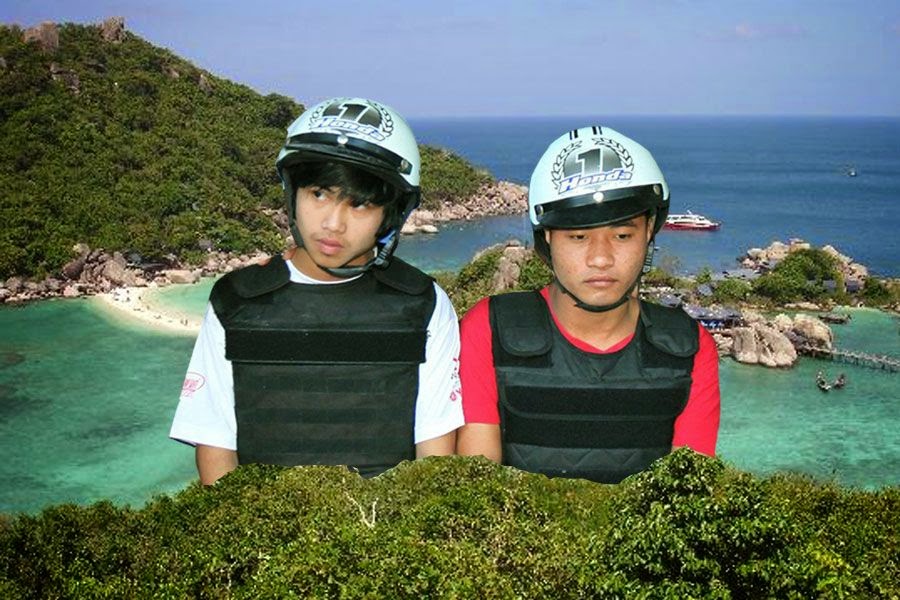