(Staff article from the BLOOMBERG NEWS on 03 November 2020.) 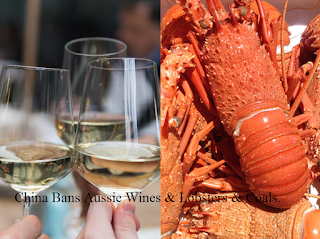 (Bloomberg) China to Halt Key Australian Imports in Sweeping Retaliation -- China has ordered traders to stop purchasing at least seven categories of Australian commodities, ratcheting up tensions with a key trading partner in its most sweeping retaliation yet.

Commodities traders in China won’t be able to import products including coal, barley, copper ore and concentrate, sugar, timber, wine and lobster, according to people familiar with the situation. The government has ordered the halt to begin on Friday, one of the people said, asking not to be identified as the information is sensitive.

The notice was verbally relayed to major traders in meetings in recent weeks, one of the people said. Iron ore, Australia’s biggest export to China, won’t be included in the halt, the people said. The order represents a dramatic deterioration in ties, which have been strained since Australia barred Huawei Technologies Co. from building its 5G network in 2018 on national security grounds.

Relations have been in free fall since Prime Minister Scott Morrison’s government in April called for an independent probe into the origins of the coronavirus. “China seems determined to punish Australia and make it an example to other countries,” said Richard McGregor, a senior fellow at Sydney-based think tank the Lowy Institute. “They want to show there’s a cost for political disagreements.”

China has already barred meat imports from four Australian slaughterhouses, delayed lobster shipments from clearing customs, slapped tariffs of more than 80% on barley, and said it won’t allow timber from Queensland state because of pests. Wine is also under an anti-dumping investigation while Chinese power stations and steel mills have been told to stop using Australian coal. Cotton purchases have also been suspended.

China’s relevant departments conducted inspection and general quarantine measures on certain Australian goods according to laws and regulations, Foreign Ministry spokesman Wang Wenbin told a briefing Tuesday in Beijing. China hopes Australia will do more so that bilateral relations can get back to normal soon, he said. China’s customs authority and Ministry of Commerce didn’t respond to faxes seeking comment.

At least one customs clearance company started halting shipments across the seven types of products on Tuesday, a person said. China will also ban shipments of Australian wheat from a yet-to-be-disclosed date, according to the South China Morning Post, which earlier reported the impending bans on other Australian commodities.

Australia’s government is working with domestic industry and making enquiries with the Chinese authorities about the reports, according to an emailed statement from Trade Minister Simon Birmingham.

“China has consistently denied any targeting of Australia and spoken about its commitment to trade rules,” the statement said. “In the spirit of their statements, we urge relevant Chinese authorities to address concerns of sectors like the seafood trade to ensure their goods can enter the Chinese market free of disruptions.”

China is Australia’s most important trading partner, with agricultural shipments alone totaling about A$16 billion ($11.3 billion) in 2018-19. With Australia in the midst of its first recession in almost 30 years, the widespread trade measures from Beijing couldn’t come at a worse time for Morrison’s government.

Australia is the world’s most China-dependent developed economy and finalized a comprehensive free-trade agreement with Beijing in 2015, a year after President Xi Jinping made a state visit. But the Huawei ban, and anti-foreign interference laws that Canberra said were designed to reduce Beijing’s “meddling” in its internal affairs, marked the end of such cordial ties.

Australia’s former treasurer Joe Hockey, who helped oversee the trade deal, on Tuesday accused Beijing of bullying and immature behavior. “The problem is China just doesn’t want to talk,” Hockey, who until January served as Australia’s ambassador to the U.S., said in a Bloomberg Television interview from Washington. “Instead they just want to react aggressively and try to bully us. And bullying never works with Australia.”

McGregor, who said he doesn’t know the veracity or specific details of all the recent trade reprisals, called Morrison’s demand for a coronavirus probe a miscalculation. “Australia and China were always going to be edging toward separate paths,” he said. “But the call for the inquiry quickly turned the relationship into a very ugly divorce.” 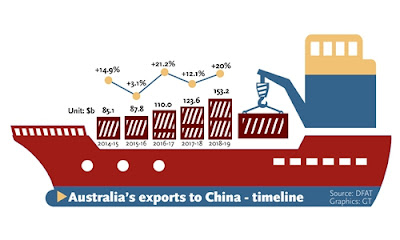 China has escalated the trade dispute with Australia in a searing new editorial that accused Australia of “colluding” with Washington’s “schemes” against China. The editorial, published yesterday by China Daily, accused Canberra of being a “roughneck” in America’s “gang” for what it claimed were moves to contain China economically and militarily.

“Canberra ... has undermined what were previously sound and mutually beneficial ties by prejudicially fueling anti-China sentiment at home, baselessly sanctioning Chinese companies and aggressively sending warships to China's doorsteps,” the editorial stated. “Canberra should realise it will get nothing from Washington in return for its collusion in its schemes, while Australia will pay tremendously for its misjudgment.”

The strongly-worded piece took aim at Australia’s relationship with the US, warning Australia should “steer clear of Washington’s brinkmanship with China before it is too late”.

“To put it simply, if Canberra continues to go out of its way to be inimical to China, its choosing sides will be a decision Australia will come to regret as its economy will only suffer further pain as China will have no choice but to look elsewhere if the respect necessary for cooperation is not forthcoming.”

The piece was published on the day that China reportedly moved to ban several new imports from Australian industries and companies, including sugar, lobster, copper, copper concentrates and some timber.

China and Australia’s trade relationship has been steadily deteriorating since Australia initiated the World Health Organisation (WHO) inquiry into the origins of Covid-19, which was unanimously backed by every member state.

However, the Communist Party State mouthpiece denied that the trade sanctions were “economic coercion” or “retribution”, and said that they were “normal trade investigations China is conducting”. Last week, Australian rock lobsters were also delayed on a Chinese airport tarmac amid custom clearance delays.

But China Daily said the “impatience” on Canberra’s part to clear the lobsters through customs “betrayed … guilty conscience”, appearing to imply the Australian product could be a source of Covid-19. “Imported seafood has been confirmed as the source of a number of novel coronavirus outbreaks in the country, which were fortunately quickly contained,” it stated.

Earlier this week, prominent Australian economist Tim Harcourt told Yahoo Finance that China’s trade blows were intended to send a political message. “They want to target things that won't really hurt them a lot, but make a point,” he said. “They really don't want to be seen as responsible for the pandemic. The best form of defence is attack.”

China is unlikely to significantly intensify the bans, he added. “Ultimately this will really hurt them. If they broke down trade with Australia, it would really hurt their recovery, the middle class, and put them under a lot of political pressure. “We do need China as a trading partner, but they need us – probably more.”

The latest escalation of the trade dispute comes as the world awaits the conclusion of the US Election, in which Joe Biden is looking increasingly likely to take the White House. During his time as US President, Donald Trump first imposed tariffs on Chinese goods on 22 January 2018, which triggered a tit-for-tat trade war for nearly two years. 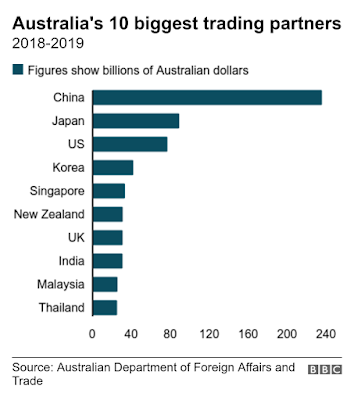