(Shashi Tharoor’s article direct from The PROJECT SYNDICATE on 06 December 2016.)

NEW DELHI – On November 8, Indian Prime Minister Narendra Modi announced that, at the stroke of midnight, some 14 trillion rupees worth of 500- and 1,000-rupee notes – 86% of all the currency in circulation – would no longer be legal tender. With that, India’s economy was plunged into chaos.

Modi’s stated goal was to make good on his campaign pledge to fight “black money”: the illicit proceeds – often held as cash – of tax evasion, crime, and corruption. He also hoped to render worthless the counterfeit notes reportedly printed by Pakistan to fuel terrorism against India. Nearly a month later, however, all the demonetization drive has achieved is severe economic disruption. Far from being a masterstroke, Modi’s decision seems to have been a miscalculation of epic proportions.

The announcement immediately triggered a mad scramble to unload the expiring banknotes. Though people have until the end of the year to deposit the notes in bank accounts, doing so in large quantities could expose them to high taxes and fines. So they rushed to gas pumps, to jewelry shops, and to creditors to repay loans. Long queues snaked in, out, and around banks, foreign-exchange counters, and ATMs – anywhere where people might exchange the soon-to-be-defunct notes.


But, upon getting to the front of the line, people were often met with strict withdrawal limits, because, in a display of shocking ineptitude, not enough new currency was printed prior to the announcement. Worse, the new notes’ design prevents them from fitting into existing ATMs, and their denomination – 2,000 rupees – is too high to be useful for most people, especially given that the government’s failure to print enough smaller-denomination notes means that few can make change.

India’s previously booming economy has now ground to a halt. All indicators – sales, traders’ incomes, production, and employment – are down. Former Prime Minister Manmohan Singh estimates that India’s GDP will shrink by 1-2% in the current fiscal year.


But, as is so often the case, the impact is not being felt equally by all. India’s wealthy, who are less reliant on cash and are more likely to hold credit cards, are relatively unaffected. The poor and the lower middle classes, however, rely on cash for their daily activities, and thus are the main victims of this supposedly “pro-poor” policy.

Small producers, lacking capital to stay afloat, are already shutting down. India’s huge number of daily wage workers can’t find employers with the cash to pay them. Local industries have suspended work for lack of money. The informal financial sector – which conducts 40% of India’s total lending, largely in rural areas – has all but collapsed.

India’s fishing industry, which depends on cash sales of freshly caught fish, is wrecked. Traders are losing perishable stocks. Farmers have been unloading produce below cost, because no one has the money to purchase it, and the winter crop could not be sown in time, because no one had cash for seeds.

Despite all of this, ordinary Indians have reacted with stoicism, seemingly willing to heed Modi’s call to be patient for 50 days, even though it could be much longer – anywhere between four months and a year – before the normal money supply is restored. The government’s assiduous public relations – which portrays people’s difficulties as a small sacrifice needed for the good of the country – seems to have done its job. “If our soldiers can stand for hours every day guarding our borders,” one popular social media meme asks, “why can’t we stand for a few hours in bank queues?”

But the sacrifice extends far beyond queues. Hospitals are turning away patients who have only old banknotes; families cannot buy food; and middle-class workers are unable to buy needed medicine. As many as 82 people have reportedly died in cash queues or related events. Furthermore, it seems likely that many of the short-term effects of the demonetization could persist – and intensify – in the longer term, with closed businesses unable to reopen. It could also cause lasting damage to India’s financial institutions, especially the Reserve Bank of India, whose reputation has already suffered. 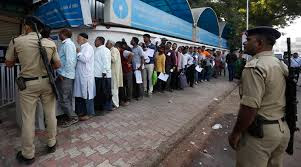 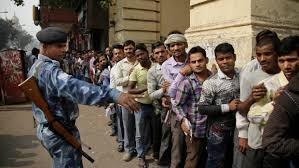 Perhaps the worst part is that these sacrifices are not likely to achieve the government’s stated goal. Not all black money is in cash, and not all cash is black money. Those who held large quantities of black money seem to have found creative ways to launder it, rather than destroying it to avoid attracting the taxman’s attention, as the government expected. As a result, most of the black money believed to have been in circulation has now flooded into banks, depriving the government of its expected dividend.

On top of all of this, the government’s plan does nothing to control the source of black money. It will not be long before old habits – under-invoicing, fake purchase orders and bills, reporting of non-existent transactions, and blatant bribery – generates a new store of black money.

Many Modi supporters claim that the demonetization policy’s problems are a result of inept implementation. But the truth is that its design was fundamentally flawed. There was no “policy skeleton,” no cost-benefit analysis, and no evidence that alternative policy options were considered. Judging by the blizzard of policy tweaks since the announcement, it seems clear that no impact study was carried out.

Yet, rather than recognize the mounting risks of the non-transparent policy environment he has created, Modi has been discussing going even further, moving India to an entirely “cashless society.” Does he not know that more than 90% of financial transactions in India are conducted in cash, or that over 90% of retail outlets lack so much as a card reader? Is he unaware that over 85% of workers are paid in cash, and that more than half of the population is unbanked?

Modi came to power in 2014 promising to boost growth, create jobs for India’s youthful population, and encourage investment. His poorly conceived demonetization has made a mockery of these objectives, while bruising his reputation as an efficient and competent manager. How long it will take for India to recover is anyone’s guess.

(Shashi Tharoor, a former UN under-secretary-general and former Indian Minister of State for Human Resource Development and Minister of State for External Affairs, is currently an MP for the Indian National Congress and Chairman of the Parliamentary Standing Committee on External Affairs. He is the author of Pax Indica: India and the World of the 21st Century.)
Posted by Hla Oo at 5:04 AM