(Staff article from the ABC NEWS AUSTRALIA on September 7, 2021.) 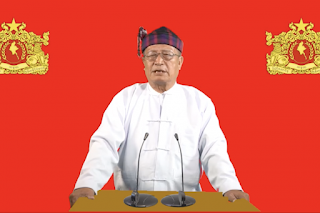 Myanmar's shadow government declares resistance war in 'public revolution' against junta: Myanmar's National Unity Government, formed by opponents of the country's military coup, has urged all citizens to revolt against the junta government.

Sharing his demands on Facebook, the NUG's acting president Duwa Lashi La called for "a people's defensive war against the military junta", and urged ethnic organisations to immediately attack coup leader Min Aung Hlaing. He also called on soldiers, police and civil servants to defect to the "public revolution".

"Following the coup, the [Myanmar] people have not passed a day with joy. It has been eight months since the military continuously and cruelly murdered, tortured, detained and imprisoned using many laws," he said in the subtitled video which lasted almost eight minutes.

"Today ... we launched a people's defensive war against the military junta. As this is a public revolution, all the citizens within [the] entire Myanmar, revolt against the rule of the military terrorists led by Min Aung Hlaing in every corner of the country."

The junta has previously branded the NUG and People's Defence Forces as terrorist groups. It said on Tuesday a call for revolt by the shadow government was a bid to gain international attention and recognition from the United Nations General Assembly that would not succeed.

The NUG is seeking to destabilise the country, including disrupting a national coronavirus vaccination programme, but is heading for failure, military spokesman Zaw Min Tun said, according to the Telegram channel of the army-owned Myawaddy television.

As part of the revolution, Duwa Lashi La said that civil servants, including those recently appointed by the military, should "immediately leave" their positions and stop being "deceived". "From today onward, all the civil servants under the military council, we warn and forbid you from going to the office," he said.

"All the Border Guard Forces (BGF) and all the militias being deceived by the junta ... from now on, join with the people and attack the people's enemy. This revolution is a just revolution. [It is] a necessary revolution for building a peaceful country and an establishment of a federal union."

Spokesperson for the NUG, Dr Sasa, told the ABC the NUG's declaration was about formally laying out a strategy to topple the military regime and unite the people. "The only way to make the junta weaker is for the people's revolution to coordinate together," Dr Sasa said.

"This is a very strong message to the military junta that the people of Myanmar say 'enough is enough'. This is the only option left, there is no other option like diplomatic options or political options."

Dr Sasa, who goes by one name, said it was also important to show the international community that the people of Myanmar remain steadfastly opposed to living under a military dictatorship. "It is very significant that we all now declare ourselves in front of the world, in front of our neighbours, and in front of the military generals that we are united," he said. "We will no longer live in fear."

(Following is the public statement, offering negotiations to NUG, by Myanmar Military as a response to the NUG's declaration of the revolutionary war against Evil Myanmar Army.) 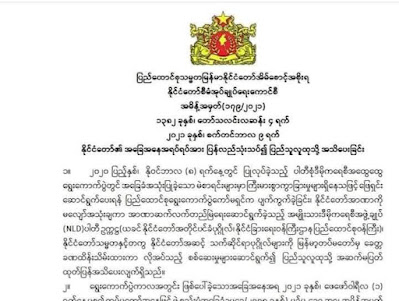 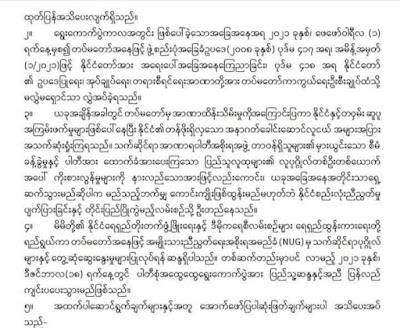 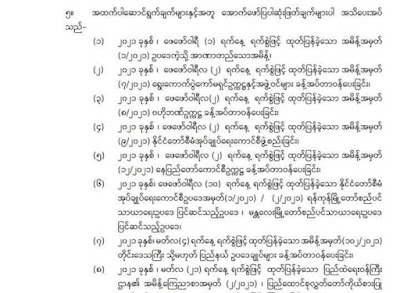 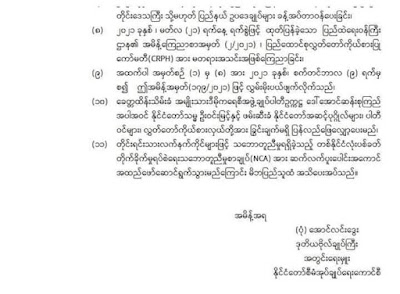