SYDNEY (Reuters) - Australia on Friday raised its terror threat level to 'high' for the first ever time, citing the likelihood of terrorist attacks by Australian citizens radicalised in Iraq or Syria, despite stressing there was no knowledge of a specific attack plan.

Australia is concerned over the number of its citizens believed to be fighting overseas with Islamist militant groups, including a suicide bomber who killed three people in Baghdad in July and two men shown in images on social media holding the severed heads of Syrian soldiers.

David Irvine, the director general of the Australian Security Intelligence Organisation (ASIO), flagged the prospect of lifting the threat level on Tuesday, citing the growing risk posed by the returning fighters.


"Last night the director general of security raised the terror threat to high, consequently today the government is raising the public awareness level to high," Prime Minister Tony Abbott said in a news conference in Melbourne.

"I want to stress that this does not mean that a terror attack is imminent. We have no specific intelligence of particular plots. What we do have is intelligence that there are people with the intent and capability to mount attacks here in Australia."

Australian police on Wednesday arrested two men suspected of helping Australian citizens fight alongside militants in Syria on terrorism-related charges. Up to 160 Australians have either been involved in fighting there or actively supported it, officials say, and at least 20 have returned to Australia after fighting in the Middle East and pose a national security risk. 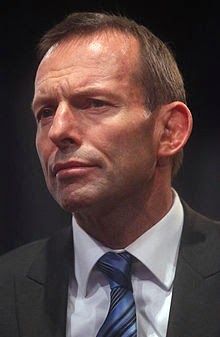 Abbott, whose conservative Liberal-National coalition has struggled in the polls since winning elections last year, is pursuing an increasingly muscular foreign policy that has moved him closer to the United States on crises like Iraq and Ukraine.

Voter support for Abbott's coalition tanked after handing down an unpopular budget in May, but his tough stance over the shooting down of a Malaysia Airlines Boeing 777 in eastern Ukraine in July delivered a sharp popularity boost.

"We cannot bring Australians together and combat extremism at home by blindly following the U.S.A. into yet another Iraq war," she said in a statement.

The U.N. Security Council is planning to demand countries "prevent and suppress" the recruitment and travel of foreign fighters to join extremist militant groups like Islamic State by ensuring it is considered a serious criminal offence under domestic laws.

The United States circulated a draft resolution late on Monday, obtained by Reuters, to the 15-member Security Council and hopes it can be unanimously adopted at a meeting chaired by U.S. President Barack Obama on Sept. 24.

Australian Federal Police (AFP) Commissioner Andrew Colvin said that the police presence would be boosted in light of the threat, especially at airports, although he would not outline specific additional measures law enforcement were taking. Heightened security will also be in place at major sporting arenas in coming weeks when Australia's football codes conduct final series matches.


"I want to reassure the public again that we want them to be aware, but assured. They may see more police, but it won't get in the way of them going about their daily business," Colvin told reporters.
Posted by Hla Oo at 4:45 PM