Mosque & Slaughterhouse Burned Down In Pa-khoke-ku

(Translated articles direct from the SHIN WIRATHU BLOG on 20 September 2014.) 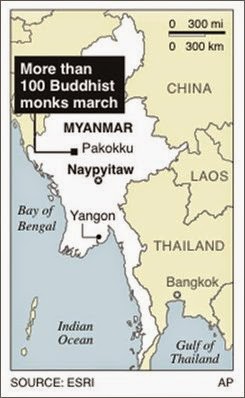 The Myit-chay Mosque of the Pa-khoke-ku town in Middle Burma was burned down to the ground by enraged Burmese-Buddhist crowd in the dark night of September-20 after the Bengali-Muslim owner couple of the Myit-chay cattle-slaughter house had viciously beaten their Burmese-Buddhist maid and let their two German Sheppard dogs on her.

The slaughter house and Muslim couple’s own house was also burned down to the ground as the more-than-300 strong enraged Buddhist mob attacked the Muslim properties as the news of the vicious assault on Buddhist woman spread.

Myit-Chay is a town-like large village near the Pa-khoke-ku town. It has more than one thousand Burmese-Buddhist households but its economy is being controlled by about forty households of rich Muslims mainly thriving on illegal cattle slaughtering and beef wholesale businesses serving the Buddhist town.


Thirty-five year-old Bengali-Muslim Moe Win and  his brother own the slaughtering house and groceries store. Moe Win got into the trouble with the local Buddhists last year when he intentionally ran over one of the villagers with his SUV. He also has second wife a converted Buddhist-Muslim woman in nearby Myo-Soe Village as he wages his Islamic Rape Jihad.

At about 8 pm in September-20 the Burmese-Buddhist victim Cho Mar Thet aged-thirty was chased out of her house and then viciously beaten by Bengali-Muslim Myo Win and his wife for some unexplained reasons and they then dragged their unconscious victim back inside their gated compound and let two big German Sheppard dogs on her.

Three Burmese-Buddhists youths passing by witnessed the crime and they then rescued the victim and took her to the village clinic. Within few minutes the angry villagers converged at the scene but the local armed-policemen on Bengali-Muslims’ payroll immediately arrived and protected the Bengali-Muslim couple.

The Burmese-Buddhist crowd then moved onto the village mosque and burned it down to the ground. By then a strong contingent of armed security-police in four police trucks arrived from nearby Pa-khoke-ku and expelled the crowd by shooting at them.


The police then cut off the power and as the village was in utter darkness they took guard positions around all other Muslim properties in the village. So far Bengali-Muslim Myo Win’s house and his slaughterhouse and beef shop and the village mosque are the only damages from the anti-Islam riots in Pakhokeku’s Myitchay. 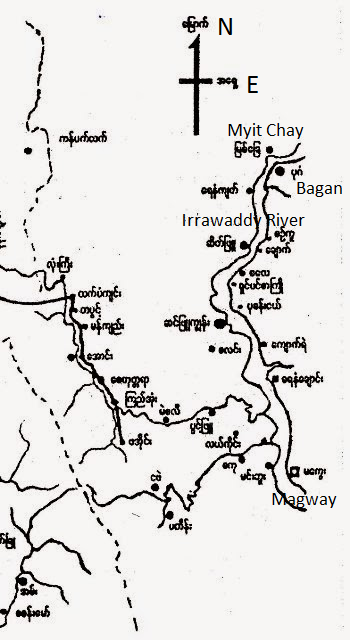 Pakokeku Ma-Ba-Tha has since been trying to quell the unrest by helping the police capture the fugitive Bengali-Muslim couple since September-20 and they through their local monk network discovered the fugitive couple were hiding at Sar-pay village in same Pakoku township.

Bengali-Muslim Moe Win’s formerly Buddhist wife originally was from the Sar-pay village and the village’s head monk U Gandamar had given the fugitive couple a refuge in his Buddhist monastery. By September-21 the Pakoku Ma-Ba-Tha and local villagers had surrounded the Sar-pay Village Monastery but the monk U Gandamar had still refused to release the fugitive couple into police custody.

Finally at 4 pm on September-21 the fugitive Muslim couple surrendered to the Ma-ba-tha monks but at the same time claiming that they were Buddhist not Muslims. But when the monks inspected their houses they found Islamic markings not Buddhist. And there were strong evidence that they sleep with their heads towards West where the Mecca is and they deliberately and intentionally keep Buddhist statues at their feet.

They are now being turned into police hands and charged with assault and insulting Buddhism and Buddhist people.