(News article direct from the SYDNEY MORNING HERALD on 18 September 2014.)

Mohammad Ali Baryalei is believed to be the most senior Australian member of the terrorist group Islamic State, having travelled to Syria in April last year. Law enforcement authorities believe he has recruited at least half of the 60 Australians now fighting with Islamic State, also known as ISIL, in Iraq and Syria.

He is reported to have a trusted position in the operational command of the al-Qaeda-linked group. Police will allege that the 33-year-old was intercepted in a telephone conversation with Sydney man Omarjan Azari where plans were outlined to kidnap a stranger in Sydney, behead them on camera and post the footage online.

Before travelling to Syria, Mr Baryalei was a leader in the "Street Dawah" movement in which members proselytised on the streets of Sydney and tried to convert Australians to Islam. Former Street Dawah friend Abdul Salam Mahmoud, who is now in Syria undertaking humanitarian work, said Mr Baryalei was someone he looked to as a leader.


"He was outspoken and wouldn't shy from speaking the truth regardless," he told Fairfax Media. "He wasn't pleased with living in Australian society and wanted to live in an Islamic society away from open alcoholism, homosexuality, fornication, drugs and capitalism."

Mr Baryalei worked as a security guard in Kings Cross and was also an aspiring actor, appearing in the television series Underbelly: The Golden Mile. He was listed as playing a "paramedic" in the seventh episode's credits.

ABC's 7.30 program reported that Mr Baryalei was from an aristocratic Afghan family who had come to Australia as refugees when he was a child. It is understood that not long after he arrived in Syria he began recruiting Australians to join him to fight with Islamic State.

Among those he is reported to have recruited are Sydneysiders Khaled Sharrouf, who has posted images on social media of himself executing prisoners in Iraq and having his young son pose with a severed head in Syria, and Mohamed Elomar, a former boxer who was also photographed holding the decapitated heads of his "enemies".

Mr Baryalei also allegedly recruited a young Sydney couple, 22-year-old Yusuf Ali (also known as Tyler Casey) and his wife Amira Karroum, 22. They were killed in their home in the Syrian city of Aleppo during fierce fighting this year. Mr Baryalei is believed to have met Mr Ali when he was a leader of the Street Dawah movement in Sydney.


Both the Australian Federal Police and Australian Security Intelligence Organisation are believed to have identified Mr Baryalei as a person of major concern. Mr Baryalei was listed in court documents this year when another man, Amin Mohamed, 23, appeared in Melbourne Magistrates Court charged over his alleged attempt to join the war in Syria. Police alleged Mr Mohamed had obtained the contact details of Mr Baryalei, also known as Abu Omar, in Turkey to help him travel from Turkey to Syria. 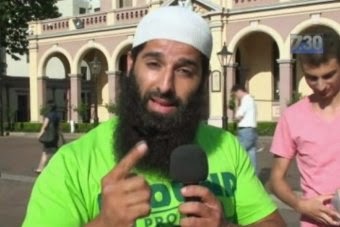 (The evil Muslim scumbag behind the foiled Sydney-Beheading plot.)

(Blogger's Note: Perfect example of a scumbag dog biting the hands that fed him. He came to Australia at very young age as a hapless refugee from the shittiest country on earth, Afghanistan, and utterly owes his existence to Australia and generous Australians both religious and secular. People like him are the main reason most Aussies hate Muslims and also the reason Abbott's conservative government with the support of whole nation is relentlessly turning the Muslim refugee boats back to Indonesia.)