The ruling from U.S. District Judge William Orrick III in San Francisco said that Trump's order targeted broad categories of federal funding for sanctuary governments, and that plaintiffs challenging the order were likely to succeed in proving it unconstitutional. The decision will block the measure for now, while the federal lawsuit works its way through the courts.

The news comes on the heels of the Department of Justice threatening on Friday to cut off funding to eight so-called “sanctuary cities,” unless they were able to provide proof to the federal government that they weren’t looking the other way when it came to undocumented immigrants.


San Francisco and Santa Clara County argued that the administration warning threatened billions of dollars in funding for each of them, making it difficult to plan budgets. "It's not like it's just some small amount of money," John Keker, an attorney for Santa Clara County, told Orrick at the April 14 hearing.

The order would affect less than $1 million in funding for Santa Clara County and possibly no money for San Francisco, Readler said. Readler argued the Trump administration was using a “bully pulpit” to "encourage communities and states to comply with the law.” In his ruling, Orrick sided with San Francisco and Santa Clara, saying the order "by its plain language, attempts to reach all federal grants, not merely the three mentioned at the hearing."

"The rest of the order is broader still, addressing all federal funding," Orrick said. "And if there was doubt about the scope of the order, the president and attorney general have erased it with their public comments."

The judge clarified that the injunction “does not impact the Government’s ability to use lawful means to enforce existing conditions of federal grants … nor does it restrict the Secretary from developing regulations or preparing guidance on designating a jurisdiction as a 'sanctuary jurisdiction.'”

The Trump administration says sanctuary cities allow dangerous criminals back on the street and that the order is needed to keep the country safe. San Francisco and other sanctuary cities say turning local police into immigration officers erodes trust that's needed to get people to report crime. 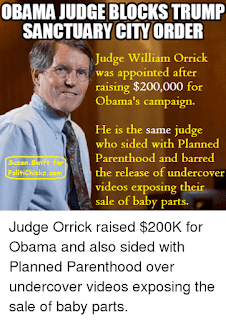 The order also has led to lawsuits by Seattle; two Massachusetts cities, Lawrence and Chelsea; and a third San Francisco Bay Area government, the city of Richmond. The San Francisco and Santa Clara County suits were the first to get a hearing before a judge.

San Francisco and the county argued in court documents that the president did not have the authority to set conditions on the allocation of federal funds and could not force local officials to enforce federal immigration law.

They also said Trump's order applied to local governments that didn't detain immigrants for possible deportation in response to federal requests, not just those that refused to provide people's immigration status.

The Department of Justice responded that the city and county's lawsuits were premature because decisions about withholding funds and what local governments qualified as sanctuary cities had yet to be made.

The sanctuary city order was among a flurry of immigration measures Trump has signed since taking office in January, including a ban on travelers from several Muslim-majority countries. A federal appeals court blocked the original travel ban. The administration then revised it, but the new version also is stalled in court.

U.S. District Judge William Orrick III, of the Northern District of California, ruled against the Trump administration after the city of San Francisco and county of Santa Clara sued over the president’s plan to withhold federal funding from cities or counties that harbor illegal aliens, Fox News reported.

Judge Orrick said that Trump’s order targeted broad categories of federal funding for sanctuary governments, and that plaintiffs challenging the order were likely to succeed in proving it unconstitutional. Orrick’s decision will block Trump’s executive order for now, while the federal lawsuit makes its way through the courts.

The activist judge not only raised $200,000 for Obama in 2008, but he also raised $30,000 to committees supporting the former president that year. The Federalist reported that the same judge issued a restraining order in 2015 against the Center for Medical Progress, the advocacy group responsible for undercover videos that reportedly showed Planned Parenthood employees planning to sell baby organs. 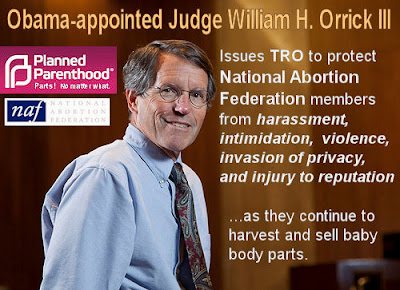 A recent string of robberies on BART (Bay Area Rapid Transport) trains took a frightening turn when 50 to 60 juveniles swarmed an Oakland station over the weekend and commandeered a train car, forcing passengers to hand over bags and cell phones and leaving at least two with head injuries, witnesses told the transit agency.

The incident — the first of its kind in recent memory — occurred around 9:30 p.m. Saturday at Coliseum Station. According to a police summary, witnesses said 50 to 60 juveniles flooded the station, jumped the fare gates and rushed to the second-story train platform. Some of the robbers apparently held open the doors of a Dublin-bound train car while others streamed inside, confronting and robbing and in some cases beating riders.

The juveniles “committed multiple strong-arm robberies of bags and cell phones,” said the summary. “At least two victims suffered head/facial injuries requiring medical attention.” Police did not say if any of the suspects were armed, their racial appearances, or describe exactly how the passengers were wounded.

BART police are beefing up patrols at Oakland stations after dozens of juveniles terrorized riders Saturday night when they invaded the Coliseum Station and commandeered at least one train car, forcing passengers to hand over bags and cell phones and leaving at least two with head injuries.

“I’ve been there 24 years and this is the first time I’ve heard of anything like this happening,” said Keith Garcia, a BART police officer and union president. Alicia Trost, a BART spokeswoman, said Monday that seven people were robbed — with the victims losing a purse, a duffel bag and five phones. Six people were robbed inside the train car, with a seventh confronted on the platform, she said. Police received no reports of guns or other weapons being brandished.

The attack was so quick, police reported, that the teenagers were able to retreat from the station and vanish into the surrounding lawless East Oakland neighborhood before BART officers could respond. The train was held for about 15 minutes as authorities interviewed victims and witnesses and tended to the injured. Trost said police arrived at the station in less than 5 minutes, but that the robberies took place in just seconds. 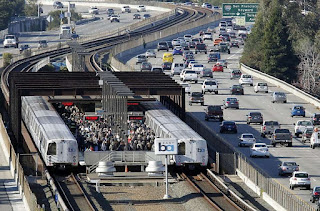 BART police had increased the number of officers patrolling Oakland stations Saturday night because of a recent rise in the number of police calls. A BART police sergeant and an officer were in the station’s back parking lot on patrol when the station was stormed, Trost said. They were the first to arrive at the concourse after the crime was reported.

“This was obviously a terrible event and I’m sure very scary for the victims and the BART employees involved,” she said. “We’re looking at it very closely to see how we can respond to make sure it doesn’t happen again.”

Director Robert Raburn, whose district includes Coliseum Station, said he was “very disturbed that such an aggressive action would put BART passengers and employees at risk. It cannot occur with impunity.”

Six of the nine cars on the train had working surveillance cameras, and BART police were viewing video from those cars as well as station cameras, Trost said. Since many victims and witnesses were unsure which car they were on, and didn’t know if the swarm had entered other cars, BART police are reviewing video from all working cameras. All BART trains are scheduled to be equipped with working cameras by the end of June.

“We are in the process of pulling all surveillance video, and we will share with Oakland police, Oakland Unified School District and Oakland Housing Authority to see if they can help identify the minors,” Trost said. “We have had success with sharing images of juveniles with this group and identifying and making arrests in the past.”

The images cannot be shared publicly, she said, because the attackers appear to be minors. Trost said Oakland police have told their BART counterparts that other incidents involving large groups of teens took place in the general area Saturday night. Oakland police officials declined to comment, and would offer no details Monday, referring questions to BART police.

Robberies committed by small groups of people who snatch valuables from riders when trains stop at stations then dash off just before the train departs have been known to happen on BART, Trost said. But this was the first time she was aware of a train being swarmed by a large group of teens. “We’re taking this seriously,” Saltzman said. “Things like this have happened elsewhere but not at BART.”

Last month, according to two television reports, a swarm of teenagers invaded a carnival near the Oakland Coliseum, beating workers and stealing prizes from the game booths. Robberies involving small groups invading stores and restaurants in the Bay Area are not unheard of. But incidents involving such large groups are rare.


The incident presents another challenge for BART, which hired a new police chief last week. The agency has struggled to contain fare evaders and is studying ways to make it harder to enter a station without paying. 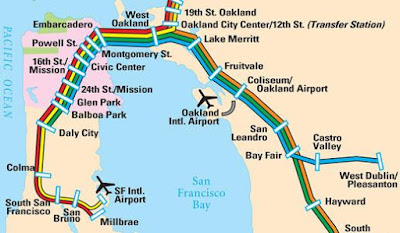 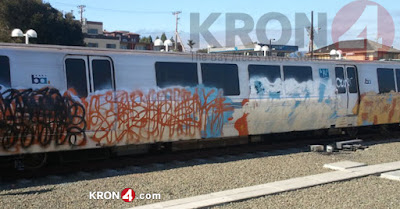