Just A Joke: NYC ID Card Won’t Get One Into Bars

(Gwynne Hogan’s article direct from The DNA INFO on 11 December 2015.) 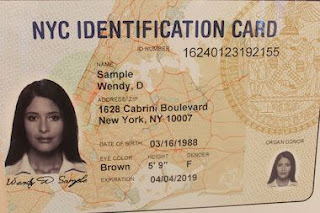 WILLIAMSBURG — Nearly a year after its release, the city-issued municipal ID  (De Blasio-invented ID card for Illegal Aliens) is still generating confusion for thirsty New Yorkers who regularly get turned away from bars because it's not valid for alcohol purchase.

Luis, a Crown Heights resident from Peru who did not want to give his last name because of his (illegal) immigration status, said that for months he'd been using his city ID to get into his favorite Williamsburg haunts without any trouble. He was relieved not to have to tote around his passport, he said.

But on a recent Saturday night, the 37-year-old was first denied entrance at Hotel Delmano then at Union Pool because he only had the Muni ID he said. "I was like what's the problem here? The Muni ID is no longer a valid way to identify yourself and I have to go back and start using my passport?" he said. "It doesn’t make sense...it's very confusing."

Steven McEnrue, a manager at Macri Park on Union Avenue, said he's had to make it clear to staff they're not allowed to accept the ID as a valid proof of date of birth, even though it clearly states date of birth on the ID. McEnrue said he thought it was misleading that the government issued the ID, and then declared that it can not be used to purchase tobacco or alcohol, among other uses.


"People do try to use it. They argue, they get really nasty that we're not letting them in," McEnrue said, adding that he doesn't understand the beaurocratic conflict. "You issue an ID that says your age, yet it’s not a valid proof of age," McEnrue said. "It's silly."

Rosemary Boeglin, a spokeswoman for the mayor, said that the limitations of the Municipal ID have always been listed on the IDNYC website. In addition, cardholders get pamphlets with what you can an can't do with the ID when you receive it in the mail. "There certainly should never have been confusion," she said.

Still, an informal poll of bars around the neighborhood revealed a range of policies on the ID, with some bars saying they hadn't heard of it and were unsure about whether they would allow it and others saying that they reject it, to the frustration of patrons.

Union Pool has had a sign on their door for several months saying that they do not accept the Municipal ID, manager Alex Holden said. He said to his knowledge, they've never accepted the IDs, but if bouncers recognized Luis as a regular they may have let him in before, he said.

"Our job is to make sure they're of age," Holden said. Holden said at first there was some confusion when the ID came out in January. "We didn’t really know what they were...It's pretty clear when you look it up, it's not good for alcohol," Holden said. "We never took them."

Managers at Hotel Delmano, the other bar where Luis was turned away, said they had no formal policy about the Municipal ID. “We've not made a decision because it hasn’t really come up yet,” a manager said, who declined to give her name.


The State Liquor Authority, which regulates bars' liquor licenses, gives all vendors with liquor license a handbook that lists all kinds of permitted IDs that can be used including state-issued IDs, military IDs and passports — and does not include the city's IDNYC on it. 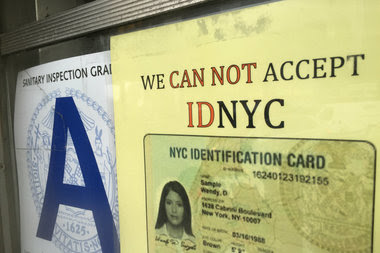