(Helena’s article direct from The HELENA GLASS on 03 February 2017.) 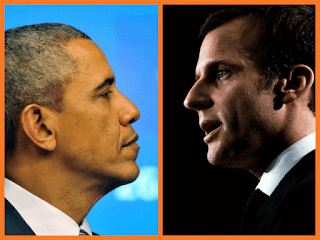 The Grooming of a President for France has been in the making for a number of years. With Hollande’s approval consistently tanking, the shadows knew they needed to find someone younger, charismatic, a Socialist, someone whose greed and lust for power could easily be bought. And they found Emmanuel Macron.

He attended one of France’s most elite schools where he was trained in Civil Service, graduating in 2004. His biography states that in 2007, he served as deputy rapporteur for the Commission to improve French growth headed by Jacques Attali, Macron was 29. But the Commission wasn’t formed until 2008.  Obviously he is a bit ‘math challenged’.  The Commission report was heavily criticized for its proposal to ‘relaunch immigration’ and ‘open borders’… Attali was ridiculed and called a ‘globalist’. Sound like anyone we know?

Macron left the Commission, which was shelved September 2010, to work for Rothschilds & Cie Banque where he became an overnight millionaire while working the Nestle acquisition of Pfizer’s nutritional outlet, which closed in 2012.  Nestle is a client of Rothschilds.  Macron had no experience in acquisitions and mergers whatsoever. What does one do when one makes millions overnight?  Apparently one quits.

He then left Rothschilds to work for Hollande as deputy secretary general of Elysee, and eventually Minister of Economy, Industry and Digital Data in 2014 where he served 18 months before running for Presidency. I’d call that a pretty fast paced runup with little to no political experience or business savvy. Sounding phishy? Because it is.


All of these positions seem a bit odd for a very junior man with no experience in any of these respective employment quarters.   And so, it would appear that Rothschilds saw in Macron what they saw in Obama before he too suddenly became a ‘millionaire’.

Leaving a company, Rothschilds, where he was making millions, to suddenly becoming a deputy government official making less than $70,000 per year and rising to a Ministerial position in less than 2 years, is more than a bit odd.

Ministers in France are typically appointed after a tedious reign of past accomplishments and decades of public service.   Macron was appointed at the ripe age of 36 with barely a smidge of experience. But it gets a bit more murky:

In essence, the man has gone from a shadow of nothingness, to millionaire status at the hands of Rothschilds, to a position that doesn’t exist in the French Government, to running for President. Murkier still: Not wishing to frame himself as a Socialist, given the current climate of politics in France and the disillusionment with Socialist Hollande, Macron created a new Party – En Marche.

En Marche is considered a Liberal Progressive Socialist Party closely aligned with Clinton politics. While Macron claims the party is ‘centrist’, his General Secretary is Richard Ferrand, a member of the Socialist Party. En Marche was partially funded by BNP Paribas, a French banking giant with connections to Rothschilds. Which would kinda, maybe indicate that En Marche is just another Rothschilds loop.

Enter Macron’s biggest competitor in the presidential race – Francois Fillon, a conservative. January 25th a member of the current Parliament under Hollande leaks to Le Canard Enchaine, that they have launched an investigation into possible misappropriation of funds in Fillon’s hiring and paying his wife as his aid.

Fillon’s lead tanks, and Macron moves closer in his competition with Le Pen despite the fact that he is nobody with no experience and a questionable title as Minister that doesn’t really exist, who made millions as a newbie with no experience working for Rothschilds on an $11 billion deal.

The story was immediately picked up and headlined by DW.com, which is now a Soros platform, Washington Post (which routinely runs articles for the Rothschilds) Bloomberg and Reuters.


It is only a matter of time before Marin Le Pen, who is currently leading in the election polls, finds herself embroiled in her own funneled scandal so as to pave the way for Emmanuel Macron, a Rothschilds/Soros agenda. This my friends, is how a President is made. 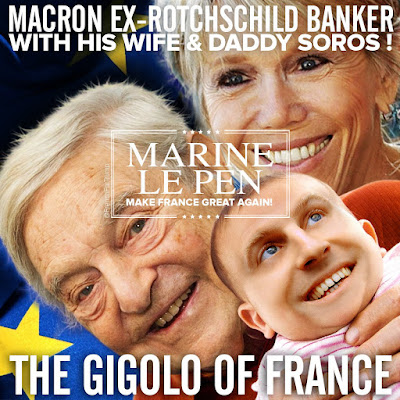 France’s Emmanuel Macron thinks he knows how to rile the crowd! Declare everyone a criminal for the crime of ‘colonization’.   But wait – haven’t we heard that before?

In 2009, after his 1st election, Barack Hussein Obama went on an apology rant, to France where he apologized for American arrogance, to the Muslims, “…America was not born as a colonial power…”, to the Summit of America where he claimed America has dictated it’s terms, to apologizing for all past US government decisions as being rooted in fear.

It would appear, Emanuel Macron has the same script writer. France, The Netherlands, Sweden, Germany, the UK, Italy, Spain, have all at some point in history engaged in ‘colonization’, and Macron thinks it’s now time to make reparations.   Perhaps he wants to give Europe back to the Ottoman Empire?   Or the Romans? Or the Macedonians?

How far back in history does his agenda go? Maybe he believes all Europeans should be flogged for this crime of colonization. But as we have seen in the US, once the guilt has been firmly instilled, suddenly you have an entire party of self-flagellation. Nationals will now be called ‘alternates’, supremists, racists, hated and defiled as unworthy of their very existence.

It is the same chaotic division that has gripped our country now being perpetuated in France and it will soon engulf and engorge everywhere – except Russia and China. Soros still can’t seem to gnarl his way through those walls.  George Soros was actually the root of the EU creation, and now he wants to create the divide. 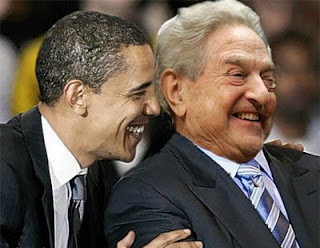 It is much like a family: Create the union, make each dependent on each other and operational as a union – then slash them into division of divorce, watch them crumble and chaos take over. Alone, lonely, afraid, vulnerable, they will go with anyone, believe anyone.

According to Karl Popper, and thus by default, George Soros, history is simplistic. It is not rooted in societal or philosophical or political nuances and references of the era, and thus subject to what we would consider ‘wrongs’ today. Instead, he sees history as a pattern or trend that cycles continually and thus we today are just as guilty as our earliest ancestors.  We are them.

Where this fails abjectly is the notion that thus all mankind is evil and must be eliminated. And so, Soros created an out – whereby certain chosen elite are spared so that they can continue to punish the rest of mankind throughout eternity. And of course, the elite are self chosen.

So what we are seeing in this Liberal agenda, in the agenda to instill guilt and condemnation is a form of subjugation. Because just as you can’t control without subjugation, you cannot punish without guilt.

France’s Emmanuel Macron is a photocopy of Obama, he exudes charm, a pretty boy without much substance, not terribly intelligent, easily manipulated, greedy, and one who likes to see himself in the Limelight.   The next step in the grooming will be to have Hollywood applaud and gush over him.

More than anything, Macron favors a centrist government over the EU – a globalist unit that has all power over each individual country, much like Obama usurping state power and giving it to the Federal government; education, healthcare, investments (Social Security), laws, marriage, etc…   Outside of that, Macron really has no position per se – on anything. No solution, simply empty promises – much like what Karl Popper advocated. France – is this where you want to go? 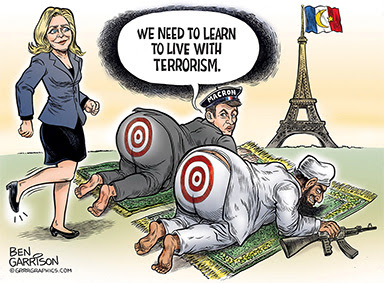