After the gold rush: How the Myanmar junta created, and then crushed, a surge in smuggling. Shwe Bon Thar Street in downtown Yangon has been the bustling hub of Myanmar’s gold trade since the colonial period, when it was known as Mogul Street. In recent months, however, its gold shops have gone unusually quiet.

Traders have deserted the market since mid-May due to a series of arrests and other interventions by the military regime aimed at controlling the trade and fighting rampant smuggling, speculation and hoarding.

In Myanmar, gold is a popular hedge against economic downturns. Sales have spiked since the February 2021 coup d’état, which sparked widespread resistance and crushed confidence in the economy. 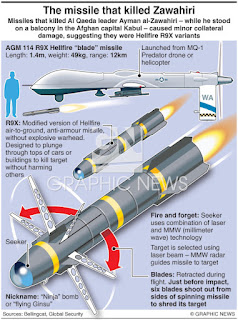 Ayman al-Zawahiri's death: What is the Hellfire R9X missile that the Americans purportedly used? Washington is reported to have used a 'ninja bomb' equipped with six blades that deploy before impact to shred its target without any blast effect.

After President Joe Biden's August 1 announcement of the death of Al-Qaeda's number one operative, Ayman al-Zawahiri, information about the weapon used remains unclear. Mr. Biden referred to a drone strike in his short speech from the White House. An American official told the press on condition of anonymity that the drone had dropped two Hellfire missiles and that no American military presence on the ground had been necessary.

Kabul, for its part, initially denied a drone strike, referring to a "rocket" that had hit "an empty house," before acknowledging on Tuesday morning that an "air attack" had been carried out by "American drones."

There were no traces of an explosion on the targeted building or collateral victims, although the family of the Al-Qaeda leader was present in the house. All these clues point to the use of a secret missile, which is believed to have been involved in other targeted assassinations of extremist leaders, but whose use the Pentagon has never confirmed.