(Concise translation of Chapter 6 from Late Tin Than Oo’s Autobiographical Novel.)
On the Htawgaw Hills by Chinese border (1977-78) 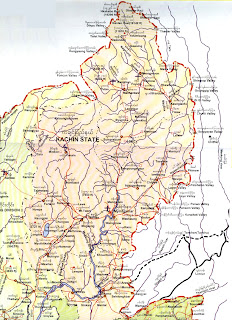 In late 1977 our battalion’s Forward Command Base was on the Htawgaw Hills by the Chinese borderline. By then our army was successfully pushing back the CPB and KIA insurgents towards the border and the Northern Command’s BOC (Base Operational Command) was at Chibwe the little town at the end of vehicular road from Waingmaw across the Irrawaddy from Myitkyinar.
Only a deep chasm and a rough mountain stream at its bottom separated our mountain range from the CPB-controlled mountain range just by the borderline and the job for my company was to storm the enemy forward camp on their range. The enemy was supposed to be only fifty strong, according to the battalion’s intelligence. Before we marched down into the drop I had a short chat with IO Captain Myo Thein.

“I don’t think our information is correct. It’s impossible the enemy strength is only fifty. That info was from the fleeing villagers about three days ago. They could reinforce with more in that three days!”
“Heavy weapon back-up and also with possible airforce back-up, I can go do it, Myo Thien.”
“I’m just worried about you. You’re already engaged and going to be married soon. I don’t want you to die, yet.”
“Piss off, Myo Thin.”
“Okay, then go, your men are ready and waiting for you!”
It was dark night. The CPB camp was within a 75mm recoilless range but for us to go down the drop, cross the stream, and climb up the enemy range could take more than a night and day even if we went the straight way. But we had to go around the way so that enemy wouldn’t see us approaching.
Read more »
Posted by Hla Oo at 12:06 AM

(Concise translation of Chapter 5 from Late Tin Than Oo’s Autobiographical Novel.)
On the Waingmaw – Chibwe Road (1975-76)


In DSA (Defense Services Academy) the first year was most troublesome for all of us as we were not yet used to the strictly-disciplined life of a junior officer-cadet. Only in the Second Year we got used to it. Third year was quite okay and Fourth Year or the Final Year was just a breeze.
But once graduated and became a second lieutenant and a gazetted-officer we became the first years again. Everything had to be learned from zero as we tried hard to apply the lessons learned from the academy into the real situations on the battle fields of frontline.
Most graduate officers from our 16th Intake (11 January 1971 – 31 December 1974) ended up in the infantry battalions under Army Northern Command based in Myitkyinar the state capital of rugged Kachin State. From the top of our class Wunna Maung Lwin (now the Foreign Minister of Burma) to the last of the class Hla Han most of us had to serve in the Kachin State as our first field postings.
Within a month Kyi Soe who was the Second Best Cadet of our intake lost both legs   stepping on an enemy mine in the Sadone area. He first ended up in the Myitkyinar hospital. My heart sunk when I heard that he later died at Mingaladon General Military Hospital from his leg wounds. Then was the height of long civil war in Kachin land.
Read more »
Posted by Hla Oo at 4:48 AM

(This is the re-post of my earlier post "Ambushed On Ledo Road".)


I WAS only 16 and wasn’t even a sworn-soldier yet when our training platoon of army recruits was ambushed by KIA (Kachin Independence Army) on the famous Ledo Road in early 1973.

As an extension of Burma Road from Lashio in Burma to Kuming in China the Ledo Road was built by the US Army during the Second World War to supply China from India through northern Burma. The whole east coast of China then was under Japanese control and the Chan-kei-sheik’s besieged Government in Yunan survived mainly on the American supplies coming through the Ledo Road.

We were on the Ledo road at about 30 miles south-west of Myitkyina to collect two truck loads of firewood for our Company’s kitchen. The normal household fuel kerosene was too expensive for the big kitchen of our mess and it had become one of our regular jobs almost every other week since the very week we brand new recruits were taught how to handle the German-designed locally-made G3 rifles.

Since the native Kachins used slash and burn shifting cultivation there were a lot of cleared fields filled with charred and fallen trees by the roadside within few hours drive from Myitkyina where our Infantry Battalion was stationed.
Read more »
Posted by Hla Oo at 12:30 AM

(Burmese Kyat has appreciated from 1200 a US$ to just 750 in last six months.)
There was something very wrong about this photo. Nope, I’d better rephrase it. There was something very right about this photo. If you look carefully you would find the armed forces Commander-in-Chief General Min Aung Hlaing walking obediently behind the civilian President ex-general Thein Sein and the Vice-President ex-general Tin Aung Myint Oo.
There is a new political order being established in Burma. After so-called sham elections last year the so-called sham Constitution (2008) has clearly established a new Burma order and the public and international communities have started showing their confidence in that new political system.
The skyrocketing Kyat, the used-to-be worthless currency of Burma, has confirmed that new confidence by rising so fast from just above 1200 a US$ last December to just below 750 a US$ yesterday. That is massive appreciation of almost 40% in just six months. What the heck is going on in Burma?

(This is the video and repost of my earlier Chun Doo-Hwan & Kang Ming-Chul post.)
October 9 in 1983 didn’t begin like any other normal Sunday in Rangoon. I had to work that day as we had to prepare for a big ministerial meeting for foreign equipment purchases.
I was then working for Burma Irrigation and our office was at 8 ½ mile on Prome Road near the Rangoon Airport. I arrived at the office about eight in that morning and I was in the middle of doing some paperwork when the sonic boom of faint but definitely huge explosion basically alerted me at about 9 or 10 in the morning.
Pondering what the hell that ka-boom of explosion was about I rushed out of office and saw a crowd gathering in the outside corridor. Everyone there agreed the explosion was from a distance and we all then went back to our work as if nothing had happened. Only back in the office I saw the today newspaper ‘The Working People’s Daily’ on a desk and glimpsed the news of South Korean President’s visit on the front page. But honestly I didn’t even vaguely connect the loud explosion with Chun Doo-Hwan the visiting President from South Korea.
But that evening the rumors of his death from the bombing at the Martyrs’ Mausoleum were the talk of the tables at every teashop the popular gathering place for the idle Burmese men. Only then I remembered the faint boom of explosion this morning. The news of the assassination attempt and his lucky survival were in all the newspapers next day.

One fine day in February 2010 KNU/KNLA Third Brigade successfully ambushed a patrol from LIB 390 of Burmese Army. The whole platoon of 18 Burmese was wiped out by more than 100 Karens at the area called Mount Ta-kwee in Nyaung Lay Bin Township of Karen State in South-eastern Burma.

The exact ambush site was between the Karen hill villages of Kaw-lay-koh and  Mu-teh on the long strategic road linking Pe-nwe-gone in Proper Burma to Saw-Hta on the Thai Border, through the town of Kyauk-kyi.

I have to warn the readers and viewers about Graphic Images though. This video is the third part of a series of four videos and this part mostly covered the scenes where the Karens were systematically stripping the guns and equipment belts and the backpacks off Burmese soldiers as the Burmese lay dead or dying on the dirt road after the devastating ambush. It also shows the executions of wounded Burmese soldiers by the Karens.

But it is a very rare footage depicting how brutal the civil war really in Burma is. Both Karen and Burmese have no qualms at all about killing each others brutally. What a shame?
Read more »
Posted by Hla Oo at 9:54 AM

The summary of the 1964 Program was to terminate the original 1955 Program (which was to accommodate the peaceful solution with the government) and to earmark the armed revolution as the main battle and to bring in other political attacks into that main battle.
Read more »
Posted by Hla Oo at 2:03 PM