Local Kachin villagers see the killing of a big snake at the dam site as a bad omen for the hydroelectric mega project at Mali-N’Mai Zup (Myitsone in Burmese or Confluence in English) on the Irrawaddy River (Mali Hka nu in Kachin), a local villager said.

Eight days after the killing of the snake, Burmese President Thein Sein proposed to parliament on September 30 that the Myitsone Dam should be halted because it is strongly rejected by the public.

(This python is even bigger than the giant Burmese python my rifle squad of three on a LRP (Long-Range-Patrol) stepped on and killed in early 1973 near the May-kha river which meets the May-li-kha river at the Myit-sone (the Confluence) and forms the mighty Irrawaddy. Read the story at this link.)

Burmese pythons now happily residing and propagating in Florida Everglades  are getting bigger and bigger too. The photos below are of the remains of almost 20 ft long python, the biggest ever caught on American soils, caught with just swallowed endangered-dear in its stomach on October 27 this year. 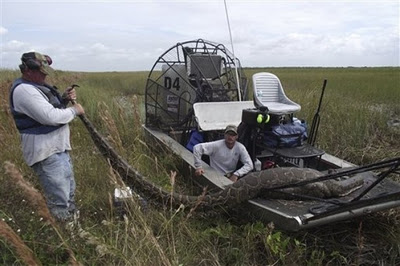 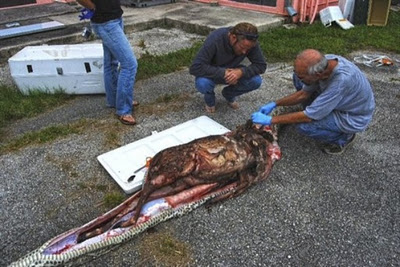 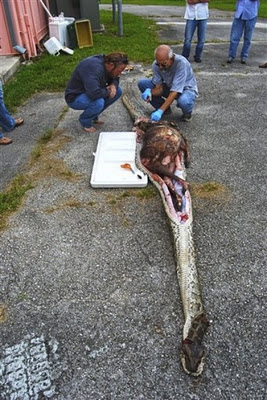 These big snakes will soon be eating Americans as they have been hunting and swallowing humans alive in the Burma's jungles for  thousands and thousands of years since the beginning of recorded history. 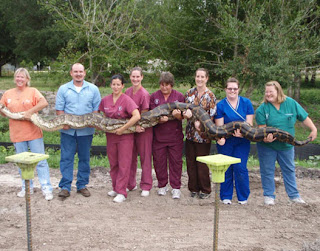 But these Americans in the photo were very lucky as they caught one of those man-eaters before it caught one of them on the swampy grounds of the Okeechobee Veterinary Hospital in South-Florida. The huge snake is over 17 ft long and it weighed 207 lbs and measured 27 inches in diameter.

Another python 14 ft long was also caught in a drainage pipe near a day-care-centre in Bradenton, Florida.  It was big enough to eat an 8-year-old child.

There are at least 100,000 Burmese pythons in South Florida and their number is growing rapidly as one mama python can lay up to 150 eggs at least once in a couple of years in the wild like Burmese jungles or swampy Florida Everglades.