(Basu Das’s article direct from The DHAKA TRIBUNE on 04 January 2017.)

Child Trafficking Victims Forced to Convert to Islam: Bangladeshi Police uncover a crime ring which lures Buddhist children and then converts them to Islam and trafficks them.

At least 72 children were converted to Islam and trafficked over the last seven years by a Bangladeshi criminal ring that preyed on impoverished, indigenous Buddhist and Hindu children, according to the Dhaka Tribune. Left is the file picture of converted boys reciting Koranic verses in a madrassa where the spiritual leader of the extremist group Ansarullah Bangla Team used to teach.

An investigation found an extremist Muslim group was going door to door among indigenous communities in the eastern Bandarban district on Burma-Bangladesh border. The group enticed impoverished families to hand over their children, saying they would receive better education and food.


However, once the ring was in possession of the children, they shipped them across the country to Dhaka and other places, converted them to Islam and placed them in madrasas. Police arrested two of those involved in the crime ring on January 1, in a raid in which they also rescued four children from a hotel. The two were charged with human trafficking.

Although police rescued 72 children from this ring over the past seven years, it is not known how many more children were trafficked by the gang. The phenomenon is not new. In January 2010, police rescued 33 Buddhist children who were trafficked to Dhaka after criminals told their families they would be placed in a good school. In 2013, 13 Buddhist children escaped while on route to Dhaka from Chittagong and alerted authorities, who were able to rescue six further children from the clutches of traffickers.

"Indigenous communities in the Chittagong Hill Tracts are often already victims of land-grabbing and displacement. The forced religious conversion of young children adds yet another facet to the already severe marginalization of ethnic and religious minorities in Southeastern Bangladesh,” a spokesperson for the Unrepresented Nations and Peoples Organization told Christian Post, commenting on the trafficking.

There is an alarming presence of forced religious conversion of indigenous children at the hands of radicals in Bandarban on the Burma-Bangladesh border.

Muslim fanatics seduce underprivileged families with scopes of a better education and lifestyle for their children, and forcefully convert the children in madrasas in Dhaka without their parents’ knowledge. Over the past seven years, police have rescued 72 children from this crime ring.

Investigation has revealed that a Machiavellian group has initiated some members of the indigenous community and sustained them financially in order to manipulate them. These new initiates go from door-to-door in underprivileged, indigenous households which are predominantly Buddhist in around seven upazilas. The neo-converts enroll the children in madrasas around the country where they are indoctrinated and converted.

On Sunday night, police raided a residential hotel in Bandarban district town and rescued four indigenous children and arrested two involved in the crime ring. The arrestees- Abu Bakar, alias Mongshoi Pru Tripura, and Md Hossain – are residents of the Bandarban bus station area. Their accomplice Sumon Kheyang, a resident of Rajsthali in Rangamati, escaped the arrest and is on the run.

Locals tipped the police off, which prompted the raid. The four rescued children are aged between 9-13 years and are from Betchhara locality under Roangchhari upazila. They were students of first to fifth grade at various schools in their neighbourhood. A human trafficking case has been filed with the Bandarban sadar police station in this connection.

Aung Thwai Ching Marma, a parent of one of the children rescued, told the Dhaka Tribune that families like his were lured with false hopes into a better future for their children, which their parents had never had a chance to attempt. 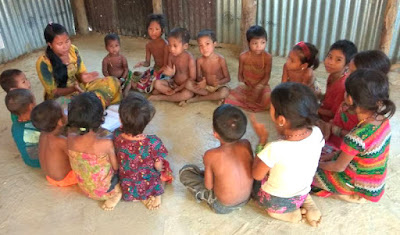 Not a new phenomena

Investigation revealed that the child trafficking ring has been active for quite some time. In January 2010, law enforcers rescued 33 Buddhist children from Otithi Boarding – a motel – in Bandarban town. Police arrested Gordon Tripura alias Rubel, Abu Horaira – a student of Darul Ihsan Madrasa in Dhaka, and Abdul Gani, a resident of Shyamoli.

The 33 rescued Buddhist children were from Thanchi upazila in Bandarban and lured to Dhaka with promises of enrolment in Dhanmondi Adorsho Madina School. Again in February 2010, police arrested one Mohan Tripura and rescued 16 indigenous children from Habib Residential Hotel.

This particular raid was carried out on suspicions of the existence of Bangladesh Tribal Association of Baptist Church in Bandarban’s Hafezghona. Police maintained the children were possibly going to be trafficked to madrasas in Dhaka.

Aung Cho Mong, president of the Bandarban sadar upazila human rights commission, told the Dhaka Tribune that the headmen in the Chittagong Hill Tracts must take proactive roles to create awareness among the people. He said if parents were more aware of these schemes, child trafficking could be minimised in the region.

In 2013, indigenous student activists rescued six Tripura children from Fakirapul Bus Terminal in Dhaka. The six children were part of a batch of 19 children being trafficked from Chimbuk to a madrasa in Pirojpur.


The other 13 children had gotten away from the clutches of the traffickers in Chittagong and raised an alarm, leading to the rescue of the former six aforementioned. Bandarban superintendent of police Sanjit Kumar Ray told the Dhaka Tribune that it is very common for child traffickers to entice families with good fortune for their children. 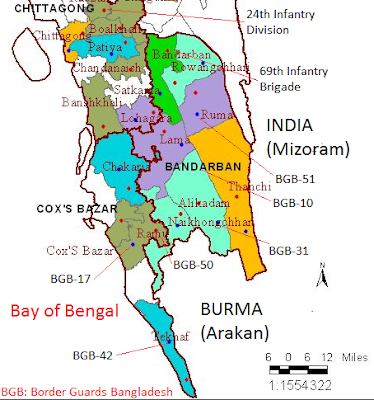 (Blogger Notes: Bandarban District in the Chittagong Hill Tracts of Bangladesh is one of the most heavily militarized border districts and all those Islamist Proselytizing activities can not be happening without the full knowledge of Bangladeshi military or the notoriously-corrupt Bangladeshi paramilitaries The BGB - Border Guards Bangladesh.)