(Pamela Geller’s article direct from The BREITBART NEWS on 20 January 2017.) 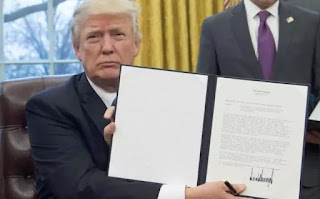 It’s been less than a week since President Donald J. Trump took office, and he has, in no short order, astonishingly delivered on myriad campaign promises.

In spades. His hands-on style of governing is breathtaking. The people spoke. The people won. And our man is delivering the goods. It’s what freedom is supposed to look like. We have been living under the boot of leftist autocrats for so long, we forgot it could be this good. We have been set free. Every day is Christmas.

The whole of the enemedia (lying-Press) is in a collective tailspin, hell-bent on ignoring his monumental accomplishments, and instead are churning out fake news stories about crowd size — his and the sore losers march (funny how they never did a story on Tea Party crowd size).


Last night, ABC news anchor David Muir, in the first interview Trump gave as President, made something of an ass of himself trying to bait the President focusing on “crowd size” and today’s favorite enemedia meme — “who’ll pay for the wall?” As if the Democrats ever gave a fig about costs.

Who paid for the absurd “cash for clunkers”? Or Obama’s endless bailouts? Or Obamacare? Or Obama’s hundreds of billions to Iran? Or Obama’s 20 trillion dollar deficit? If Trump says Mexico will pay for that wall, rest assured, they will — one way or another.

Trump’s accomplishments in five days are nothing short of miraculous. We are witnessing history. And it’s wonderful. And no one is talking about it. It’s kafkaesque. The old Republican guard, falling into the media’s trap once again, decry Trump’s handling of the media.

They say he shouldn’t be responding to the media’s false accusations. Instead, he should be talking about the actions he is taking. As if the media would report on that (no less positively) about what Trump has set in motion And why are the RINOs still considered our spokespeople? They are not. Has FOX learned nothing from this election? They, too, are playing into the enemedia’s false narratives of crowd size, wall costs and black sites.

The left will not go quietly. They want a war, and by George, they may very well get one. Last night, they demonstrated in Washington Square Park — led by Hamas-tied CAIR. It is amusing that the left has handed the reins of power to terror-tied groups such as CAIR, who seek to impose sharia across this great land. Black slavery (in many Muslim countries), gender apartheid, creed apartheid is now the rallying cry for the left? Perfect. The left has become a ridiculous parody of itself.

He declared his intention to fight terrorism in a phone call with Egyptian President Sisi. Obama buried Israel at the UN. President Trump is resurrecting her: he announced intentions to defund UN groups who give full membership to the Palestinian Authority.

That money would have gone to fund Jew-killing – Obama’s parting gift to the Jews. The Muslim leaders of “Palestinian Authority” exhort Muslims living in Gaza, Judea and Samaria to kill Jews and attack the Jewish state. They glorify murder and reward terrorists and their families, and indoctrinate their young to grow up to be homicide/suicide bombers. These funds would have been used to slaughter, maim and destroy. That would have been Obama’s crowning legacy.

President Donald Trump has begun in just days to undo the damage Barack Obama done. There is much more to do, but he has given free people tremendous grounds for hope.

(Pamela Geller is the President of the American Freedom Defense Initiative (AFDI), publisher of PamelaGeller.com and author of The Post-American Presidency: The Obama Administration’s War on America and Stop the Islamization of America: A Practical Guide to the Resistance.) 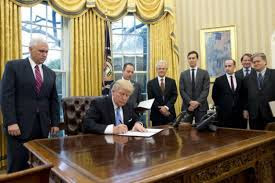 Donald Trump swept to the White House on a tide of divisive rhetoric about building walls and draining the swamp to make America great again.

In his first week in office, he got down to work. With a whirlwind of executive actions, public statements and tweets, the Republican ordered the most radical and controversial sweeping reforms of any president's first days in office in living memory. "This Congress is going to be the busiest Congress we've had in decades, maybe ever," Mr Trump said on Thursday. "Enough 'all talk, no action.' We have to deliver."

ObamaCare Relieve: Mr Trump's first act as president last Friday was to take steps to weaken Obamacare. Just hours after taking the Oath of Office and before heading out to his inauguration balls, Mr Trump signed an executive order on the Affordable Care Act that directed government departments to scale back as many aspects of the Affordable Care Act as possible. It was a symbolic first act in his quest to entirely dismantle Obamacare.

During his campaign he described Mr Obama's signature policy, that provided healthcare for 20 million previously uninsured Americans, as a disaster. However, during his first meeting with Mr Obama after winning November's election, he had said he would consider leaving in place certain parts of the Affordable Care Act - it appears that is no longer the case. 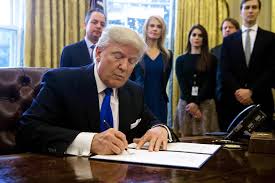 Takes immediate action on abortion: Mr Trump reinstated a ban on Monday on providing federal money to international groups that perform abortions or provide information on the option. Mr Obama had ended the ban in 2009. The new president signed the reinstatement directive at a ceremony in the White House surrounded by his key aides - all of whom were men.

"Women's health and rights are now one of the first casualties of the Trump administration," said Serra Sippel, president of the Center for Health and Gender Equity in Washington. "The global gag rule has been associated with an increase in unsafe abortions and we expect that Trump's global gag rule will cost women their lives."

Federal hiring freeze implemented: On Monday, Mr Trump signed an executive order imposing a federal hiring freeze, which the administration claimed will slow the dramatic expansion of the government workforce. The hiring freeze applies across the federal government, with exceptions only for military, national security or public safety personnel.

Unions representing federal workers criticised the move. Randy Erwin, president of the National Federation of federal Employees, says the freeze will lead to the government relying on contractors who end up costing more. Statistics show the size of the federal workforce is as low as it's been since 1965.

Administration goes to war with Environmental Protection Agency: On Tuesday, Mr Trump signed executive orders to push ahead with two controversial oil pipelines and promised to curb regulations on US industry, saying environmentalism had grown “out of control”.

All EPA contracts, grants and inter-agency agreements have apparently been halted pending a review. The Trump administration has also reportedly instituted a media blackout at the EPA and barred staff from awarding any new contracts or grants.

“Our friends that want to build in the United States, they go many, many years and then they can’t get the environmental permit over something that nobody ever heard of before,” he said. “And it’s absolutely crazy.” “I believe in it,” Mr Trump said of protecting the environment, “but it’s out of control.”

Meanwhile, scientific findings by EPA staff are to be scrutinised, Doug Ericksen, a spokesman for Mr Trump's transition team, said, adding that agency scientists were expected to undergo an internal vetting process but did not give specifics.

Trump orders 'immediate construction' of the border wall with Mexico - and insists they will pay: Mr Trump sent shockwaves around the world when he announced during his campaign that he planned to build a multi-billion dollar border wall between the US and Mexico. He said it was needed to keep out illegal immigrants, who he branded "rapists" and "drug dealers".

On Wednesday he promised "immediate construction" would begin on the border wall and repeated that he would ensure Mexico itself paid for it. The White House said on Thursday that Mexico may be forced to reimburse America for the wall's construction, estimated at $15 billion, through an aggressive 20 per cent tax on all its exports to the United States.

Enrique Pena Nieto, the Mexican president, cancelled a summit with Mr Trump in Washington next week as relations between the two countries hit a new low.

Trump to suspend refugees from Syria - and 'will set up safe zones in war-torn country': Along with tackling illegal immigration across America's southern border, Mr Trump also intends to stop accepting Syrian refugees and is expected to suspend the United States' broader refugee programme for 120 days, it emerged on Wednesday.

He is planning to suspend issuing visas for people from Iran, Iraq, Libya, Somalia, Sudan, Syria or Yemen for at least 30 days, according to a draft executive order. All are predominantly Muslim countries. Mr Trump is expected to sign the order this week. It was not clear if the draft will be revised before then.

There were also reports that the president is expected to order the Pentagon and the State Department to craft a plan for setting up "safe zones" for refugees in Syria. Such a move could risk escalation of US military involvement in Syria's civil war.

Says he 'absolutely' believes torture works: On Wednesday, Mr Trump announced that he "absolutely" believed torture worked and that the US should "fight fire with fire". Mr Trump is also expected to order a review that could lead to bringing back a CIA programme for holding terrorism suspects in secret overseas "black site" prisons.

The president's renewed embrace of torture in the fight against Islamist extremism sets him up for an almighty battle with all the countries around the world that reject torture and defend human rights. Theresa May said Britain will not back away from its condemnation of the use of torture, regardless of the approach taken by Mr Trump's administration.

Any return to the Bush administration's initial anti-terrorism tactics - including secret prisons and interrogation methods considered torture under international law - would likely alienate key US allies in the fight against militant groups like al Qaeda and Islamic State.

Mike Pence, the vice president, said on Thursday that Mr Trump would keep his promise to nominate a "strict constructionist" to the Supreme Court. "Strict construction" is a manner of interpreting the US Constitution using a literal and narrow definition of language in the document without regard to changes that have occurred in American society since the 18th century document was written.

Investigation launched over 'voter fraud' in November's presidential election: Mr Spicer announced on Thursday that Mr Trump will sign an executive action to commission an investigation into widespread voter fraud, raising the prospect of a federal government probe into a widely debunked claim and sparking alarm among experts and Democrats.

Donald J. Trump
✔ @realDonaldTrump
I will be asking for a major investigation into VOTER FRAUD, including those registered to vote in two states, those who are illegal and....
11:10 PM - 25 Jan 2017

It is thought that the president continues to be upset that he lost the popular vote to Hillary Clinton by almost three million votes - and believes this was due to the voter fraud he alleges was widespread.
Posted by Hla Oo at 12:32 AM