One Stupid Senator Costs US Consumers Billions A Year 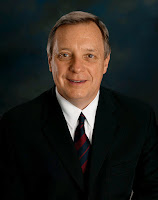 Obama’s former Chief-of-Staff Rahm Emanuel once said, “You never let a serious crisis go to waste.” Fellow Illinois Democrat Senator Dick Durbin put that philosophy into practice during the writing of the Dodd-Frank Act, the monstrous piece of legislation falsely sold to the public as a solution to the financial crisis.

Not only did Dodd-Frank not fix the problem of “too big to fail” (it made it worse), but by the time it made its way to President Obama’s desk it became filled with provisions that had nothing remotely to do with the crisis in the first place. One such provision was the Durbin Amendment, which capped the price banks can charge retailers for making credit and debit card transactions.

Prior to the amendment, financial institutions would charge various rates, largely dependent upon the size of the purchase. A card transaction on a $2 cup of coffee may cost a couple of pennies, while a $1000 laptop may cost a little over a dollar. A Fed study found that banks on average charged 1.15% per transaction.


While a little over 1% doesn’t seem like a lot, interchange fees meant over $16 billion for financial institutions in 2009 – and American retailers like Wal-Mart decided they didn’t want to pay anymore. In comes Dick Durbin, whose amendment dramatically reduced interchange fees.

Now financial institutions can only charge 21 cents per transaction, plus .05% to help cover fraud losses, plus an additional penny in certain cases. The age old fallacy of price control, now in mobile payment form.

While the Durbin Amendment doesn’t explicitly require retailers to charge 21 cents for small dollar purchases, by capping the revenue banks made on high dollar luxury goods, it’s natural for them to make up the difference – well over $10 billion a year – elsewhere.

So the cards fee charged for the $2 cup of coffee is no longer just over 2 cents a cup, it is now 21 cents – or over 10%. While this massive increase is an annoyance for a chain like Starbucks or Dunkin’ Donuts, it’s proven to be a killer for independent coffee shops.

Another example of how government regulation benefits big business by unintentionally destroying the bottom line of mom and pop shops. (Stupid ignorant Socialist Dick Durbin didn’t foresee that at all.)

Of course it’s not just coffee shops and diners that are impacted. Anyone who still uses Redbox Movie rental will noticed that a basic DVD rental no longer costs a dollar like it used to – a direct result of the additional costs passed on to them thanks to Dick Durbin. Consumers aren’t only impacted by the rising cost of small dollar purchases or with fewer choices for lattes.

Banks have increased fees on customers and reduced benefits. That’s why fewer banks offer free checking, while others have experimented with charging customers for debit cards. During his presidential campaign, Bernie Sanders took to Twitter to criticize rising ATM fees. Of course such fees are the direct result of the Dodd-Frank bill he himself supported. While one would hope Senator Sanders would eventually learn a lesson about unintended consequences, anyone who self-identifies as a socialist has is unlikely to learn from history

None of this comes as a surprise of course, it was anticipated that banks would have to make up loss revenue elsewhere. Defenders of the Durbin Amendment at the time argued that consumers would benefit as retailers lowered costs as a result to paying fewer fees. Unfortunately the exact opposite has been found to be true. A 2014 Fed study on the impact of the Durbin Amendment on retailer prices have found that “few merchants” reduced prices as a result of the measure, while “sizable fraction” of merchants either increased prices or limited the use of debit cards as a result.


Over six years after Dodd-Frank was signed into law, it is clear that the only ones who benefited from the Durbin Amendment have been big box chains like Wal-Mart and Home Depot. It cost consumers, on the other hand, literally billions of dollars a year.

With Donald Trump taking office this month, and with all signs pointing to Dodd-Frank changes on the horizon, eliminating the Durbin Amendment should be a top priority. Fewer things would be a bigger win for the blue collar workers that put him into office.

While the free market is the most effective at setting prices and rates for products and services in a way that benefits all consumers, some politicians think federal government bureaucrats are more qualified to do this.

Although this mode of thinking is considered entirely antiquated by most, the notion of price controls made its way into the Dodd-Frank financial regulations legislation in 2010. The Durbin amendment, as it is known, allows the Federal Reserve to regulate the “interchange” fee charged to retailers when consumers use their debit cards to make purchases.

This system has provided great benefits to consumers, who now use their debit cards for most of their regular spending in both brick-and-mortar retail stores and online retailers. Supporters of the Durbin amendment claimed the interchange fees charged for the processing of Visa and Mastercard debit charges were too high, and that regulation would lower them, at the benefit of consumers.

However, the small fees associated with debit card transactions were willingly paid by retailers, who almost always charge the same prices on products for cash buyers as well as those using their debit cards, because they knew the convenience of accepting debit card payments leads to more sales. Any retailer refusing to accept debit cards as payment would register far fewer sales in an age when most consumers use debit cards for nearly all of their retail purchases.

Soon after President Barack Obama signed Dodd-Frank, including the Durbin amendment, into law, many of the largest banks increase their fees on basic checking accounts. Additionally, many banks offering free checking discontinued that, leading today to free checking being almost non-existent. While most banks offered free checking before, only 39 percent of banks nationally offer free checking just two years after Dodd-Frank became law.

As a result of the regulations under the Durbin amendment, the interchange fees on the use of debit cards come at the disadvantage of smaller purchases, at the expense of consumers.

“Is it really fair to make the local bagel store owner pay the same 22-cent fee on a $1 order that a jewelry store owner does on a $350 order? Should consumers really be paying billions of dollars extra a year for a service that businesses are willingly ascribing to?” asked Andrew F. Quinlan, writing for The Daily Caller. 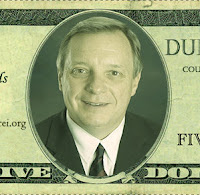 The disappearance of free debit cards and free checking accounts is highlighted by the “Durbin Dollars” campaign from the Competitive Enterprise Institute. The group urges citizens to send to Sen. Richard Durbin, D-Ill., the author of the Durbin amendment, the “Durbin Dollar” that features the senator’s picture, has a $5 face value, representing the typical monthly fee banks charge for checking accounts, noting the end of free debit cards and free checking that most consumers enjoyed before Dodd-Frank.

Retailers were expected to save about $36 billion from lower interchange fees expected from enacting the Durbin amendment, but those savings were pocketed instead of being turned over to consumers in the form of lower prices.

Essentially, the lowering of the fees resulted in a “merchant markup” that benefits retailers and not consumers. A consumer group called the Electronic Payments Coalition has launched a campaign in favor of repealing the Durbin amendment, called “Stop the Merchant Markup.”

Rep. Randy Neugebauer, R-Texas, the chairman of the House Financial Institutions Subcommittee, has introduced a measure to remedy this issue. The legislation repeals section 1075 (the Durbin amendment) of the Consumer Financial Protection Act of 2010, commonly known as Dodd-Frank.

“Today, I introduced H.R. 5465, which will repeal the misguided debit swipe fee reforms introduced by the Dodd-Frank Act. Section 1075 of the Dodd-Frank Act, commonly called the Durbin amendment, represents an egregious example of the federal government picking winners and losers. Simply put, it represents crony capitalism at its worst,” Neugebauer said.

The Consumer Bankers Association, a group representing citizens and small- business owners, issued a letter supporting the Neugebauer legislation to repeal the Durbin amendment, noting its benefits to consumers.

“Flawed policies like the Durbin amendment that pick winners and losers with little consideration of the market impact ultimately harm consumers. Merchants promised price controls would allow them to pass along savings — about $8 billion annually — to consumers in the form of lower prices,” the CBA letter states. “Ironically, this call for market intervention came from some of the same merchants who have since demanded the government stay out of business decisions on soft drink sizes and menu offerings.”

As with all attempts by the government to set price controls, the Durbin amendment clearly has not worked. Those who understand how the free market works predicted this and they were right.


The further that Rep. Neugebauer’s legislation to repeal this mistake goes forward, the more likely consumer benefits in lower prices financial services will return. Repealing the Durbin amendment will once again bring about more choices for better financial services, to the benefit of all banking customers.
Posted by Hla Oo at 2:03 AM