(Tom Tancredo’s article direct from The BREITBART NEWS on 21 January 2017.) 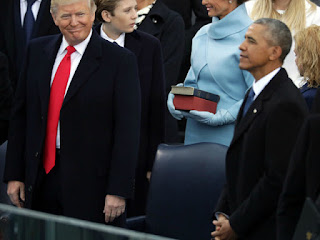 We Must Thank Barack Obama for Making Donald Trump Possible – And Inevitable. Thank you, Obama, for being the polarizing king of cultural warfare. Without you, the Republican Party might still be stuck in La-La land.

On day two of the Trump presidency, Donald Trump is already the greatest president of the 21st Century, thanks to Barack Obama’s “legacy.” As for George Bush, technically he was elected at the end of the 20th century, so that’s another story. But William Jefferson Clinton’s eight years left America in good health compared to Barack Obama, the worst president in our history.

Ten weeks after the November 8 earthquake, our political establishment is still in shock over the American people’s choice of Donald John Trump to lead our great nation. Let’s explain it to them in the simplest of terms: Barack Obama was such a complete disaster in the Oval Office that voters demanded a 180-degree reversal in the direction of the country, not the small course correction offered by other candidates.


Voters were willing to forgive Trump’s “ugly warts” because he promised a radical makeover, not a facelift. Let’s itemize a few of Obama’s gifts to the Trump campaign. There are dozens, but a few stand out:

1. If Obama hadn’t made war on the domestic energy industry, millions of blue-collar American families would have still been employed in it and may not have been motivated to vote for a game changing president.

2. If he hadn’t tried a massive takeover of the American health care system, millions of Americans would have kept their doctor and their health care plan and may not have been motivated to vote for a game changing president.

3. If he hadn’t made war on the military and veterans, perhaps the men and women serving our nation and their families would not have felt the necessity and patriotic DUTY of voting for a game changing president.

4. If he and his appointees hadn’t done everything possible to enshrine identity politics as the routine way of attacking political opponents, millions of white Americans would still have seen him as who he portrayed himself to be in his 2008 campaign – a healer instead of the divider he really is.

5. If he hadn’t showed his utter contempt for the real America and his love of politically correct symbolism, the establishment elite would have remained in control, whether it was Hillary or one of the “moderate” Republicans in the Republican Primary.

6. If he and his party hadn’t stubbornly refused to acknowledge that radical Islam is a manifest and growing threat to all of Western civilization, perhaps people would have had some confidence in their ability to protect us from that menace.

7. If he hadn’t totally ignored public opposition to expanded Muslim immigration from countries torn apart by terrorist jihad, perhaps his political allies would have found a way to explain and defend his feckless foreign policy.

8. If he had not disarmed our Border Patrol of tools and weapons to control our nation’s borders, perhaps his unprecedented contempt for national sovereignty would not have been so obvious and so insulting to ordinary citizens.

9. If he had not dismissed and derided citizen outrage over thousands of heinous crimes committed by illegal aliens who return across our open borders again and again, maybe candidate Trump’s promise to secure our borders would not have become the centerpiece of a successful campaign.

10. If he hadn’t shown contempt for the United States Constitution by governing through executive decrees instead of laws enacted by the Congress, a “legacy” never repudiated by his chosen successor, maybe the rule of law would not lie in tatters.

11. If Obama had been a less radical “change agent,” more devoted to constitutional values, and less addicted to “transformative” policies, the Republican Party might well have chosen another “moderate” nominee like Jeb Bush or Marco Rubio, who would have continued many of Obama’s destructive policies..

Don’t you kinda like the sound of that phrase, “ex-president Obama”? I know I do.

(Thomas Gerard "Tom" Tancredo (born 20 December 1945) is an American politician from Colorado, who represented the state's sixth congressional district in the United States House of Representatives from 1999 to 2009, as a Republican. He ran for President of the United States during the 2008 election, and was the Constitution Party's unsuccessful nominee for Governor of Colorado in 2010.)
Posted by Hla Oo at 1:24 AM