A large crowd followed and pressed around Jesus. And a woman was there who had been subject to bleeding for twelve years. She had suffered a great deal under the care of many doctors and had spent all she had, yet instead of getting better she grew worse.

When she heard about Jesus, she came up behind him in the crowd and touched his cloak, because she thought, “If I just touch his clothes, I will be healed.” Immediately her bleeding stopped and she felt in her body that she was freed from her suffering.
At once Jesus realized that power had gone out from him. He turned around in crowd and kept looking to see who had touched his clothes. Then the woman, knowing what had happened to her, came and fell at his feet and told him. He said to her, “Daughter, your faith has healed you. Go in peace and be freed from your suffering.”
Mark 5:24-33

I was born in a jungle camp of CPB (Communist Party of Burma) HQ on the ranges of Pegu-Yoma in June 1956. My father then was a divisional military commander of CPB Peoples’ Army and my mother was a central committee member of CPB Women Congress. Before they joined the Party my father was an ex-army officer and my mother a young high school student. They met in the jungle and got married with approval of the Party.
Started in March 1948 the flames of Communist rebellion were still burning bright but the military situation in the mid 1950 was not in their favor like before in the beginning. Not only losing all their strongholds in the population centers of middle Burma the Communist were now being chased like the wild pigs in the jungle by the troops loyal to U Nu’s AFPFL Government while the pro-government militia kept them away from the towns and large villages.
In the beginning of 1956 a huge military operation named Aungmaga was launched against the CPB Central Committee HQ in the Pakoku District. Led by Colonel Kyi Win the Tenth Brigade of Burmese Army even captured the CPB HQ in early March 1956. When I was born the base military hospital was just a makeshift jungle camp comprising a couple of thatch-roofed bamboo huts in an abandoned teak plantation called Palway Kyowaing on the Pegu-yoma north west of Pyimanar.

There were male paramedics and a couple of midwives-cum-nurses and the matron was sister Daw Moe Swe, according to my mother. The camp basically had nothing decent to eat except the bamboo shoots and wild rock melons from the jungle floor. To feed my mother and the wounded comrades Daw Moe Swe and her fellow nurses and medics had to forage the jungle.
My mother was seriously malnourished and she was so thin and thus produced an extremely underweight baby. I was just a tiny skeleton covered with shriveled skin. This was what she so often said so many years later when I became an adult fairly big and strong.
“I couldn’t watch whenever Aunty Daw Moe Swe tried to inject you with some medicine to keep you alive. You were so miserably thin, just bones and skin, she always had a hard time finding one of your veins and you were screaming with pain till you had no energy or voice left to cry out no more.”
I do not understand why these bloody Communists tried to breed in the jungle. Maybe they didn’t have condoms or contraceptive pills back then especially in a jungle. My sister born a year and half before me died within few days after birth and my mother was half expecting I could go the same way. But I survived miraculously even a brutal raid by the notorious Chin troops. According to my mother the Chins attacked the hospital camp one day and killed many and captured alive Daw Moe Swe and the rest but she with me on her back escaped into the jungle.


***************************
She and the baby finally ended up with the family of a Party sympathizer in nearby Pyimanar and a few weeks later I was given to her eldest sister from the Delta town of Moulmeingyun about 200 miles away from Pyimanar as she couldn’t take care of me anymore. She desperately wanted to go back into the jungle and joined my father and his rag tag gang of CPB’s Red Army. So she wrote to her sister to come meet her incognito at certain date and time at Pyimanar Railway Station.
The transfer of baby me was done unceremoniously on the noisily crowded platform of the Railway Station. According to my adopted mother her baby sister whom she hadn’t seen since she joined the underground CPB at least ten years ago suddenly appeared beside her in the crowd and handed her a small smelly bundle and a handwritten note and immediately disappeared without even saying a word.
The bundle was three months old me in my own liquidy shit as I then had a non-stop diarrhea. And the note contained my name and my date of birth. My mother couldn’t hang around too long as she was shit scared of being captured by the police or the army or the town’s militia.
My dear mother didn’t see me again till I was ten years old and she was captured alive together with my younger brother by the Chin troops and then released only after they had been kept at their battalion compound in Magwe for more than a year as hostages till my father agreed to surrender. 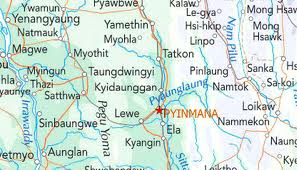 Tin Than Oo: A Soldier, Writer, and Director

According to the National Library of Australia in Canberra more and more former Tatmadaw officers are publishing memoirs.

Most prominent one of these officer-writers had passed away on 5th November. Lt. Col Maung Maung Oo (a) Tin Than Oo (DSA) aged 57 died of chronic liver cirrhosis at the Army Base Hospital in Mingaladon.

He wrote many books and later became a famous (or infamous) director for directing a grand army propaganda film called “Lotus Blossoming at Dawn” involving the famous 68 film stars of Burmese film industry. The film basically portrayed the slanted-army-version of Modern Burmese History.

In the morning of 24 December 1948 a small detachment of armed Burmese police accompanied by a heavily-armed unit of Sitwundan, the feared Socialist-paramilitary, entered the large Karen village of Palaw situated between Tavoy and Mergui in the Tenasserim Division of Southern Burma. A model village with a fine church and its own middle school.
As a local operation for the government campaign of disarming the Karens the armed Burmese forcefully gathered the village elders and ordered them to hand over all their arms. Despite the anarchic conditions spreading all over Burma where Communists were in a full blown civil war with ruling Socialists while large gangs of dacoits freely roaming the lawless countryside the Karen elders reluctantly surrendered their weapons kept for the sole purpose of village self-defense.

What happened later that day was just an outright massacre for no valid reason other than the victims were Christian Karens the villains Buddhist Burmese. This extract is from the book “Memoirs of the Four-Foot Colonel” by General Smith Dun the first Commander-in-Chief of post-war Burmese Army and a Karen.