On third December 1946 the Communists were expelled from ruling AFPFL. The expulsion basically laid the foundation for never-ending civil war in Burma.
Just 30 days before on third November 1946 AFPFL (Anti-Fascist Peoples’ Freedom League) the loosely formed coalition of Than Htun’s Communists and Kyaw Nyein’s Socialists and Aung San’s PVO had achieved their aim of forming the Aung San led interim government by pressuring the colonial government by a widely disruptive general strike nationwide. Even the colonial police joined the strike.
When the Governor Sir Hubert Rance invited AFPFL to join the colonial government in a power-sharing deal the Communists appointed their former Secretary-General Thein Phe Myint a minister. Aung San was effectively the PM and Kyaw Nyein was the powerful Home minister with police and internal security portfolios. Other ministers were appointed by the Governor.

Twenty days later, Indian Communists sent Burmese Communists a telegram denouncing their decision to join the colonial government a treacherous act since any kind of power sharing deal with British colonialist alone was a serious reactionary act in their view.
Almost from the beginning the CPB had had an influential Bengali cell and through those Burmese-Indians like Goshal aka Thakhin Ba Tin the CPI had ideological and some organizational control over the CPB till the late 1960s when Communist Party of China started controlling the CPB through the CPC Politburo Member responsible for the Ethnic Minorities’ Affairs in China. For CPC the Burmese Communists are another group of ethnic minorities like Tibetans and Ughurs.
So Burmese Communists did an about-turn, quit the government, and start accusing Aung San and Kyaw Nyein as power hungry traitors who had surrendered to the British just to join the colonial government. Already a staunch anti-Communist, Socialist Kyaw Nyein was greatly mad at the Communists and began to openly attack them in the AFPFL. He finally asked the Central Executive Committee meeting to expel the Communists from AFPFL if they did not immediately withdraw their wild accusations and apologize to him and Aung San.
But the Communists bluntly refused and Aung San was forced to expel CPB from the ruling AFPFL coalition. Modern Burma’s very first strong man Kyaw Nyein had won his very first round fight with the Communists and there were many more brutal rounds to come till he was put in jail by Ne Win on 5th May 1963. He died of natural cause on 29th June 1986.

Natural Born Socialist
Born on 8th March 1915 in Pyinmanar son of another small town lawyer Kyaw Nyein was already a seasoned Socialist when he graduated with a Bachelor of Law degree from Rangoon University in 1941. He was one of the founding leaders of PRP (People Revolutionary Party which later became the Socialist Party) and the deputy foreign minister in Dr Ba Maw’s puppet government under Japanese rule.
Even though the majority of student leaders then were influenced by the Marxist Leninist literature Kyaw Nyein was rather strongly influenced by the writings of English Fabian Socialists. This translated extract is from the book “Kyaw Nyein” by his close friend Thein Phe Myint.
“Kyaw Nyein did see all the poor as the whole mass of poor people not as either worker class or peasant class as in Marxist classification. He was then reading Bernard Shaw’s books about Fabian Socialism. For example the Intelligent Woman’s Guide to Socialism. He also read G.D.H. Cole’s books Guide through World Chaos and What Marx Really Meant.  Cole was an Oxford professor and a popular Socialist writer widely respected by the Burmese student leaders then.
He never read and studied the books written directly by the Communist leaders and intellectuals such as Marx or Lenin or Stalin. He only read the books about Communism and Communists written by the famous writers he already liked. The closest book he read about Marxism was John Strachey’s Theory and Practice of Socialism and Laski’s Communism.  He was always suspicious of the Communists not telling the truth about their Communism.
Even during the Japanese rule when the Russian and Chinese Communists were in peoples’ favor because of their strong stands and eventual victories against the Nazi Germany and Japan Kyaw Nyein only read Webbs’ Soviet Communism and Handbook of Marxism. He was a natural born Fabian Socialist who hated the Communists.”
Kyaw Nyein’s natural dislike of Communism in particular and one party dictatorship in general was even hardened more with deep disgust by his fearful experiences during the brutal Japanese rule from 1942 till 1945. This translated extract is what he wrote as the intro for the book “Kyaw Nyein”.
“During Japanese rule anyone accused of being a British spy were unjustly arrested without any investigation at all. Many people were tortured by brutal ways such as pulling the nails out, pouring boiling water into mouth, giving electric shocks. The prisoners even had to dig their own graves before they were finally murdered.
Even we political leaders and ministers then were afraid our days would come one day. Whenever I heard the screams and loud cries of hapless tortured victims from the Kempetai’s office nearby on my daily trips to the government office I even thought that must be the eight layers of Great Hell we Buddhists believe in.
Only then I remembered the English Colonial Government and even felt grateful to them for not behaving like the Japanese. Only then I clearly and vividly understood the value of democracy where no one could be arrested unjustly without being charged in a court of law, the value of freedom of expressions and thoughts, and the value of the Rule of Law where no one could be brutally tortured.
I then promised myself with a very strong commitment to fight whole of my life against any communist system, or any one party dictatorship, or any fascist system where our people could be treated like the pigs and cows in a slaughter house.”
After the Communists were expelled from the AFPFL the old friends and colleagues Kyaw Nyein and Than Htun started their grueling duel. The bitter divide between Communists and Socialists was felt all over the country even at the family level. Most small villages then were identified as either Communist or Socialist village. Same divide also happened in the urban communities too.
Communist Socialist Split
The split between Than Htun’s Communists and Kyaw Nyein’s Socialists did begin earlier in 1945 just after the Second World War.

Almost all the educated young leaders of the extreme nationalist movement then were either hardcore communists or communist sympathizers.

So naturally once they were back in Rangoon from their rural hideouts after the big war they tried to regroup various leftwing factions into a solid political front under the banner of fledgling Communist Party of Burma (CPB).
CPB then was proudly jubilant for their leadership role in so-called anti-Japanese revolution while the Socialists and Aung San led army were almost being denounced for their active collaboration with the Japanese during the war.

And initially the Socialists agreed to dissolve their PRP (People Revolutionary Party) and join the CPB to continue fighting the British for the complete independence.
But the naturally suspicious Communists refused to let the Socialists join the CPB wholesale; instead they wanted to individually consider new membership application case by case. The Communists wanted to filter out the reactionaries from the revolutionaries.
Also the unification of two major leftwing groups was hampered by the irreconcilable personal disputes between the old friends Than Htun and Kyaw Nyein. This translated extract is from the book “Kyaw Nyein” by Thein Phe Myint.
“Once the Japanese retreated from Rangoon all the political leaders came back and started the serious discussions of uniting CPB and PRP into a single revolutionary front. Then was the time the power of CPB was at its height. Internationally the Soviet Union was universally praised for rescuing the whole world from the fascists’ mouth, and internally the people of Burma were grateful of CPB for leading the fascist Japanese revolution.
So during the discussions for a united front the CPB and Communists had the upper hand over the PRP and Socialists. Instead of looking for a political solution in merging two parties since there were no distinguishable political or policy disputes between the two parties, they started looking for a personal solution.
The Communist leaders like Than Htun proposed if PRP wanted a single party as the revolutionary front they had to join CPB individually and CPB would select them case by case. They were willing to accept all the PRP leaders except Kyaw Nyein.
They asked, ‘Ko Kyaw Nyein, why don’t you retire from politics?’
It was in 1945. Kyaw Nyein angrily replied that he was in politics not to quit just because some people asked him to quit politics.”
The proposed revolutionary front under the CPB collapsed and Than Htun and Kyaw Nyein re-started the respective political parties, CPB and BSP (Burma Socialist Party), legally and publicly. Both parties also started massive recruitment drives throughout the country and formed rival workers unions and peasants associations. The sibling rivalry had begun and the long civil war between the Socialist and Communists would eventually follow.
As a legacy of their guerilla activities against the Japanese during the big war Communists mostly controlled the countryside through their Peasants Unions while the Socialist dominated the cities and towns through their Workers Unions and rival Peasants Associations. The same ideological war was already raging inside the Burmese army well before the hostilities between two left-wing parties came out into open. Socialist and Communist divide was in Aung San’s BIA since its inception in 1941.
Communist-Led Socialist-Army of Non-believers
Aung San’s wartime Burmese army had three easily identifiable echelons in its officer corps.

Aung San and the thirty comrades trained in Japan were the top most echelon and majority of them were Marxist, militant thakhins handpicked by Thakhin Mya and thus the Communists. Their allegiances were with the CPB first and Aung San second. Famous Brigadier Kyaw Zaw (Thakhin Shwe) was one of them. Ne Win sitting on the fence and a few right wing officers among them were the exception.
Below that top most echelon were the middle ranking officers who Joined BIA later in Burma. Most of them were the members of the PRP (which became the Socialist Party) as it was Kyaw Nyein’s and his Party’s far-reaching policy to influence the army by encouraging the educated young party members to join the fledgling army.
Than Htun and the Communists basically lost out on that opportunity as their official policy during the big war was to totally oppose the Japanese and their slave army BIA while Kyaw Nyein and the Socialists were actively cooperating with the Japanese. Famous Brigadier Aung Gyi was a member of that group. 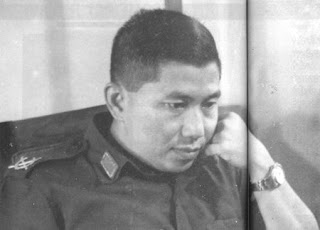