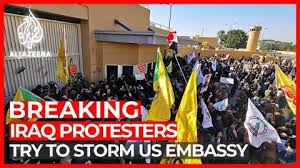 US caught off guard as protesters storm Baghdad embassy: Hundreds of protesters breached the outer walls of the heavily fortified US embassy compound in Baghdad on Tuesday, setting parts of its parameter on fire - an angry reaction to deadly US air raids days earlier against Kataib Hizbollah, an Iran-backed militia.

Most of the protesters, members of the paramilitary group Hashd al-Shaabi (Popular Mobilisation Forces, or PMF), were clad in military fatigues. PMF is an umbrella organisation of several armed militia groups - including Kataib Hezbollah - funded and armed by Iran, but with formal links to the Iraqi armed forces. Shouting "Down, Down USA!", the crowd hurled rocks and water bottles and vandalised security cameras outside the embassy grounds.

The US said it launched the attacks on Sunday - killing at least 25 fighters - in Iraq and Syria in response to a rocket attack on Friday near Kirkuk, which killed an American civilian contractor - an assault Washington blamed on Kataib Hezbollah. 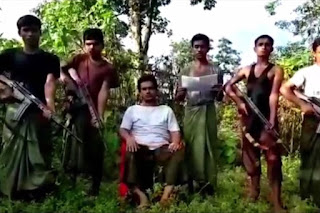 ''They want such trouble to continue so that our border region with Myanmar is disturbed. They think this will help them in elections,'' Hasina said. Her cabinet colleague Matia Chowdhury has recently blamed Pakistan for instigating the ARSA terrorists to launch serial attacks against Burmese security forces.

(Repost of US Air Force Band's "Joy To The World" at Washington DC in December 2013.) 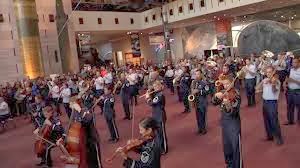 End of this post is the you tube video of United States Air Force Band performing “Joy To The World” as a Flash Mob at the Smithsonian’s National Air and Space Museum in Washington D.C. on December 3, 2013 welcoming the 2013 Christmas celebrations.

Following is the lyrics of that famous Christmas carol “Joy To The World”  I downloaded from the Wikipedia site.

(Repost of my very first Christmas Eve at the New York City in the year 2011.)

The Big Apple or the New York City is a wholesomely overwhelming town for a simple jungle boy like me. Especially the enormous Romanesque facades of century old skyscrapers. And it hurts my neck so much that I’ve stopped trying to look up at their distinctive tops.

Like many other wide-eyed tourists from the Australian fringe of the mighty empire of USA I ended up wandering on the wide avenues leading to the Times Square brightly lit and filled to the rims by the excited crowd on the Christmas Eve.

I walked and walked and walked aimlessly on the near-zero freezing but still unbelievably crowded Fifth Avenue and ended up, fortunately of course as I wasn’t really looking for it, right in front of a beautifully grand Gothic-revival church. I walked in and realized this is the historic St.Patrick’s Cathedral   and the traditional Midnight Mass was just a few hours away.

The First Miracle by Jeffrey Archer (1980) 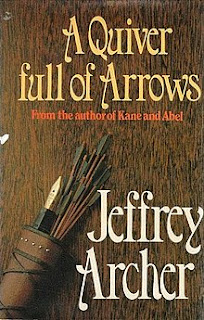 Tomorrow it would be A.D. 1, but nobody had told him. If anyone had, he wouldn’t have understood, because he thought it was the forty-third year of the reign of the emperor. And in any case, he had more important things on his mind.

His mother was still angry with him, and he had to admit that he’d been naughty that day, even by the standards of a normal thirteen-year-old. He hadn’t meant to drop the pitcher when she had sent him to the well for water. He had tried to explain to her that it wasn’t his fault he had tripped over a stone—that bit at least was true. What he hadn’t told her was that he had been chasing a stray dog at the time. And then there was that pomegranate: How was he to know that it was the last one, and that his father had taken a liking to them?

The young Roman was now dreading his father’s return and the possibility that he might be given another leathering. He could still recall the last one: He hadn’t been able to sit down for two days without being reminded of the pain, and the thin red scars hadn’t completely disappeared for three weeks.


He sat on the window ledge in a shaded corner of his room, trying to think of some way he could redeem himself in his mother’s eyes. He had spilled cooking oil all over his tunic and she had thrown him out of the kitchen. “Go and play outside,” she had snapped, but playing outside wasn’t much fun if you were only allowed to play by yourself. Pater had forbidden him to mix with the local boys.