(This Gwynne Dyer’s article is from London Free Press Comment Section.)
Burma is the second poorest country in Asia (after North Korea), although fifty years ago it was the second richest. It is the second most repressive dictatorship in Asia, outdone again only by North Korea. It is third from the bottom on Transparency International's list of the world's most corrupt countries. And the credit for all these distinctions goes to the Burmese army, which has ruled the country with an iron hand for the past half-century.
So what should pro-democracy leaders in Burma do when the army shows signs of wanting to make a deal and withdraw from direct control over the country. Do you hold out for more, or do you co-operate with the generals in the hope that they can be persuaded to go further later on?
Read more »
Posted by Hla Oo at 7:59 PM

(This prepared testimony on 30 Sept 2009 was before the US Senate.)
The policies of the United States and other Western governments over the past twenty years towards Burma have failed. They have not been helpful in moving the country towards meaningful democratic change and at the same time have largely neglected the country's multiple ethnic and armed conflicts as well as its pressing humanitarian challenges.
As we move towards a very welcome review and adjustment of American policy, I think it's important to reflect on the history behind today's challenges, appreciate the critical and complex watershed Burma now faces, and try to identify pragmatic ways forward.
War and state-building
There is a myth that Burma emerged from British rule in 1948 as a peaceful democracy with all the attributes necessary for later success, only to fall mysteriously into dictatorship and extreme poverty. Burma in 1948 was actually already at civil war, its economy in ruins. And this civil war has continued until today. It is the longest running set of armed conflicts anywhere in the world, setting the Burmese army against an amazing array of battlefield opponents - from the Mujahedeen along the former East Pakistan/Bangladesh border, to remnants of Chiang Kai-Shek's Nationalist Army, to drug-lords, to Beijing-backed communist rebels, to Christian-led ethnic Karen insurgents in the jungles near Thailand.
Read more »
Posted by Hla Oo at 9:36 AM

A Karen Warrior-Mum, now in Australia or United States? 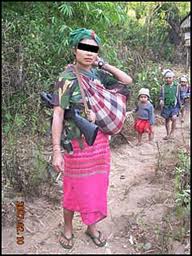 She was once a Karen refugee on Thai Border with Burma. She, her KNLA (Karen National Liberation Army) fighter husband, and their four young children have  already been resettled probably in  either Australia or United States under UN-sponsored generous refugee-settlement-programs.

I just hope she hasn't brought  her extremely-lethal M79 40mm grenade-rocket-launcher along with her. Otherwise those pushy Aussie or aggressive American soccer mums are to watch out on the field at Saturday children soccer matches. Karens naturally do not take shit from no one and they are quite lethal especially the mothers with young kids.

Thousands and thousands of  KNLA fighters are being resettled as  genuine refugees in the developed countries like Australia and United States since mid 1990s.

All these battle-hardened former-guerrilla-turned-refugees from the war-torn countries like Burma and Sri Lanka etc should be forced to join Australian Army reserves or US National Guards so that their  valuable battlefield experiences are fully utilized for the benefits of their new homelands such as Australia and United States.
Posted by Hla Oo at 12:23 AM

(This is direct translation of former Burmese Immigration Officer Maung Maung’s article.)
This article is mainly for the so-called Burmese human-rights activists now re-settling in a Third Country like USA or Australia or one of rich European countries.
If you are one of those activists who are now wildly hollering on the World Wide Web for the human rights of so-called Rohingyas without really knowing the facts I would like to ask you to take your Rohingyas into your homes.
I am neither a racist nor do I wear the cloak of a democracy/human-rights activist. But if any of you do feel pity for those illegal Bengali Muslims being without their own separate territory you should put them up on your own houses and you will eventually learn about them.

(Some of this post is from Myanmar Times’s article on 11 November 2011.)
Freed 13 Burmese sailors/fishermen working on the Thai PT Interfishery’s fishing boat P.V. Prantalay-12 taken for ransom by Somali Pirates more than a year ago in April last year have been back in Rangoon since First October this year.
“We were forced to stay in pirates’ hands for about one year and three months. Our boat was taken on 18 April 2010 by Somali pirates in the Indian Waters on our way from Ranong in Thailand to Djibouti.
There were 25 Africans in camouflage uniforms on two speed boats when they pointed their heavy-weapons at our boat and stopped us. First we thought they were patrolling soldiers. Only when they were on our boat we knew they were mother-fucking Somalis.
But we couldn’t do anything as they were heavily armed. Three boats from our Company, Boats 11 and 12 and 14, were taken altogether almost at the same time.”
Read more »
Posted by Hla Oo at 9:22 AM 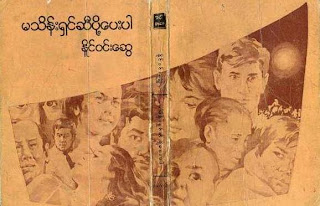 Year 1968
Next days I would find her at her usual waiting place underneath the big Banyan tree.
She would sit at the seat by U Kaung Zone’s Shop and look out for me as the train came in. Even in the blurry-dawn I could detect the shadows of smiles on her happy round face. But once she was on the train she wouldn’t wait for me at the doorway. Instead she would avoid me by disappearing inside where the passengers were once I came up to her car.

Michael Posner: The Beginning of A Transition in Burma

Michael Posner the Assistant Secretary of State for Democracy, Human Rights, and Labor is Former President of New York-based Human Rights First. He has a long history of doing good and noble things, according to the gawker.com, like helping torture victims and refugees and promoting “corporate accountability for working conditions in the apparel industry.”
Posner’s organization works with activists in countries including Guatemala, Russia, Zimbabwe, and Indonesia. He drafted and campaigned for a 1992 US law called the Torture Victim Protection Act, designed to give victims of most serious abuses a remedy in US courts, according to the Human Rights First Web Site.

Michael Posner, the State Department’s top human rights Official, and Derek Mitchell, Washington’s new special envoy for Burma, just wrapped up a trip to Rangoon and Naypyidaw this week. And following is the text of their press conference released by the US State Department at the end of their Burma trip.
Read more »
Posted by Hla Oo at 12:04 AM

(This press release was from The New Light of Myanmar on 4 November 2011.)

(This 31 October press release is from UN News Centre.)
31 October 2011 -   A top United Nations official arrived today in Myanmar for a five-day visit during which he will meet with a number of Government officials and other key actors.
The visit by Vijay Nambiar is at the invitation of the Government, according to a statement issued by Secretary-General Ban Ki-moon’s spokesperson.
“The Special Advisor to the Secretary-General for Myanmar, Mr. Vijay Nambiar, arrived today in Myanmar today for a five-day visit at the invitation of the Government. The Special Advisor will hold meetings in Naypyitaw and Yangon with the Government of Myanmar, political parties, civil society organizations and other key interlocutors, in the implementations of the Secretary-General’s good offices mandate.”
Read more »
Posted by Hla Oo at 10:36 AM

INTERNATIONAL MONETARY FUND
External Relations Department
Press Release
FOR IMMEDIATE RELEASE
November 1, 2011
Statement at the Conclusion of the Article VIII Mission to Myanmar
The following statement was issued today in Nay Pyi Taw, after the conclusion of an International Monetary Fund (IMF) Article VIII mission to Myanmar:
Read more »
Posted by Hla Oo at 12:42 AM