Who Really Is Doing Ethnic Cleansing In Maungdaw?

On the 15th of September the dead bodies of a family were discovered by Burmese security forces In Mayu Mountain Rakhine state. The family are believed to be Daingnet minorities. The murders have been blamed on the Arakanese Rohingya Salvation Army (ARSA, formerly Harakah al Yakin) a terrorist group with links to Saudi Arabia and Pakistan.

The ARSA attacks were clearly timed to coincide with the report before the UN General Assembly of the Advisory Committee on Rakhine led by former UN Secretary General Kofi Annan. Dr Annan was appointed by the Burmese government to oversee an independent investigation of violence in the troubled region.


Numerous eyewitness reports in Myanmar say terrorists set fire to villages provoking an exodus, while others, including the Western corporate media, say the fires were lit by the Burmese military (Tatmadaw). There is no conclusive proof of who is responsible for the tragic exodus of Myanmar’s ethnic Bengali Muslim communities from North Rakhine State.

But former US chargé d’affaires at the US Embassy in Burma, Pricilla Clapp contradicted US agencies when she told France 24 News that she believed the Takfiri terrorists were responsible for the burning of villages as well as laying land mines.

If Clapp’s claims are true, it strongly suggests that the terrorist insurgency in north Rakhine state is gaining in strength. The Islamist insurgency is estimated to be between 20,000 and 30,000 fighters. There are many accounts by Buddhist Muslim and Hindu villagers of being surrounded and attacked by the Takfiri terrorists.

According to American Burmese researcher Rich Heizman, almost all the inhabitants of Ye Bauk Kyar village, three miles from the Bangladeshi border, were hacked to death with machetes, swords and axes by the "Bengali" Islamist terrorists. 92 Hindus were also slaughtered in Kha Maung Seik village. 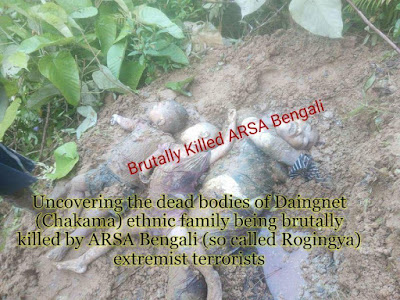 None of this evidence has been mentioned in the mainstream media reports. The horrific suffering of thousands of people has been deliberately and callously ignored. Instead, we are fed a constant, lachrymose refrain about ‘the world’s most persecuted minority’ and ‘genocide against the Rohingya’.

The soundbites mask what may be a far more disturbing reality, namely that those screaming genocide are the very people behind the mass killing. The modus operandi is familiar to followers of the Syrian and Libyan wars where false-flag terrorist atrocities, designed to gain maximum media attention in order to blame the targeted government, have been the norm.

The discovery of the massacre in the Mayu Mountain comes after the Asian Human Rights Centre (ACHR) recently called on the UN to dismiss its current Special Rapporteur for Human Rights Professor Yanghee Lee, due to serious violations of the UN Human Rights Council’s Resolution 5/2 ‘Code of Conduct for Special Procedures Mandate-holders of the Human Rights Council- article 3 General Principles of conduct.’

Professor Lee is accused of omitting to mention the terrorist groups who are responsible for atrocities. Lee has also been accused of grossly inflating the figures of Bengali (Rohingya) deaths.

The ACHR accuses the UN Special Rapporteur of failing to name the Takfiri groups for the killing of 3 Mro villagers on the third of August, 2017, 5 ethnic Daingnets in Kyandoe village on the 26th of August and 7 Mro people in Kan-Taing village, Maungdaw on the 28th of August.

Some Buddhist and Hindu refugees who fled to Rakhine State capital Sittway after the violence, have been transported by the military back to their villages. Many Buddhist refugees, who are a minority in Maungdaw township in north Rakhine State, have said they will never return to the area due to fear of more attacks.

Thousands of Muslim refugees remain in Bangladesh. Many of the community leaders are refusing to cooperate with Myanmar’s identity verification process, making repatriation impossible. Many Muslims in the refugee camps are also coming under pressure from terrorist groups such as ARSA. Half of North Rakhine’s Muslim community have remained in Rakhine State.

But ARSA terrorists have also been murdering Muslims accused of collaborating with the Burmese military (Tatmadaw). All Myanmar Islamic Religious Organisation has condemned the terrorists and urged all Muslims to collaborate with the government.

The Burmese military has been accused of torturing and decapitating children. The claims are highly unlikely. In fact, it is far more likely that such atrocities are being committed by the Takfiri terrorists themselves. The Tatdadaw are highly trained soldiers who are armed mostly with Browning Hi-powder, Heckler & Koch G3s and MP5 submachine guns.

The photos of thousands of slaughtered victims have been released by the Burmese government. The bodies are badly mutilated with deep gashes from machetes, swords and knives - the main weapons of the Takfiri terrorists. The Western press is trying to play down the savagery of the ARSA terrorists, claiming that they are ‘lightly armed’. There is nothing ‘light’ about a machete or a sword in the hands of a lunatic Takfiri terrorist. 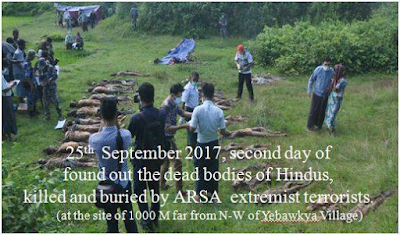 Since communal violence in 2012 where Mosques and Buddhist temples were attacked leading to the murder of Buddhists and Muslims, Myanmar has been targeted with a growing foreign-backed Islamist insurgency in north Rakhine State, where Bengali Muslims are the ethno-religious majority.

The Buddhist majority in Myanmar fear that if illegal Bengali immigration is not curbed, they may one day face the same persecution as their co-religionists in Bangladesh. Murders and rapes of Buddhists by Takfiri terrorists are regularly documented in Bangladesh, where the growing Wahhabi death cult is receiving copious funding from Saudi Arabia.

Since the destruction of the ancient statues of Buddha in Afghanistan by the Taliban in 2001, there have been growing religious tensions in South East Asia. The strategic objective of Western imperialism in Asia is to exploit those tensions by stoking sectarian hatred - a Huntingtonian ‘clash of civilisations’ which provides the pretext for ‘humanitarian’ intervention’ or ‘anti-terrorist’ counter-insurgency operations by the United States and its allies.

The growing Buddhist/Muslim tensions provide the US with the pretext he needs to counter the rise of China. Only in that context can one begin to understand imperialism’s new humanitarian cause- the Rohingya.

(Gearóid Ó Colmáin, AHT Paris correspondent, is a journalist and political analyst. His work focuses on globalization, geopolitics and class struggle. His articles have been translated into many languages. He is a regular contributor to Global Research, Russia Today International, Press TV, Sputnik Radio France, Sputnik English , Al Etijah TV , Sahar TV Englis, Sahar French and has also appeared on Al Jazeera. He writes in English, Irish Gaelic and French.)