(Emily Cadman’s article direct from The BLOOMBERG on 22 September 2017.)

On a wet, midweek evening when most Australians are home cooking dinner, fewer than a third of the lights are on in the apartments in Melbourne’s Docklands. Most shops and restaurants are closed. The only people passing through seem to be on their way elsewhere.

These "ghost towers," as the high-end residential property with three-bedroom apartments costing almost $1 million have been dubbed, are popular with Chinese investors who mostly live abroad. Their darkened blocks loom as sparsely occupied symbols of a property market where even solidly middle class households have increasingly found themselves priced out.

Now, policy makers are seizing on public resentment and hitting foreign buyers with more taxes. New South Wales has doubled its surcharge when foreigners purchase residential property, and Western Australia has added a new tax as well. More controversially, both the conservative federal government and the left-leaning one in Victoria state that includes Melbourne this year imposed additional taxes on properties deemed to be empty for six months or more.


Figuring out if a home is vacant is a vexing subject for public officials. Those in Victoria have said they plan to ask owners to self-declare, and also intend to monitor electricity and water usage to find cheaters. The Australian Taxation Office suggests the government investigate tips from informants. Other potential sources could include postal data or tax returns, said Catherine Cashmore, president of land tax reform group Prosper.

But real estate professionals say it’s easy enough to hire someone to come in and turn on switches and taps, making a place appear lived-in. Agents say many properties are only temporarily empty, waiting for children to attend university or a family to able to move in. They also raise questions of fairness.

“What next?" said Monika Tu, the Sydney-based director of Black Diamondz, which specializes in high end property sales to mainly Chinese buyers. "Shall we tax people who buy new shoes and don’t wear them?’’

Australia’s moves are part of a growing global trend, primarily in response to the massive amounts of capital that have poured out of China and into real estate around the world. Additional taxes targeting vacant homes are already in place in Vancouver and some London boroughs, with Toronto and Dublin mulling similar moves.

In Vancouver, officials have used social media to blast the public with reminders that secondary residences be occupied at least six months of the year or else they’ll be subject to the tax, and that they must file declarations in December to determine it. Violators can incur fines of as much as C$10,000 ($8,150) a day.

An analysis of Australian census data by the City Futures Research Centre found more than one in 10 homes unoccupied on the night of the count last year, with empty properties having risen 19 percent in Melbourne and 15 percent in Sydney since the last census five years previously.

Foreigners, mainly from China, purchased 25 percent and 16 percent of the new housing supply in New South Wales and Victoria, respectively, in the year through September 2016, according to a Credit Suisse Group AG examination of state tax receipts.

Melbourne’s tax of 1 percent of an empty home’s value takes effect in January, adding to a nationwide tax imposed in May that starts at A$5,500 ($4,400) and scales sharply upward for properties worth more than A$1 million.

The median price for a home in Sydney has doubled since 2009, according to data tracker CoreLogic Inc. More than 60 percent of Sydney residents blame foreign investment for the rising prices, according to a survey by University of Sydney academic Dallas Rogers. The idea of taking prime real estate out of the housing supply and leaving it vacant has become a focus of anger as homelessness has risen and hundreds of people have been camping in the rough out outside places like the Reserve Bank of Australia.

“It’s just absurd," said Tony Keenan, chief executive officer of affordability advocacy group Launch Housing, referring to the fact that Australia’s long period of uninterrupted growth should have ensured homes for everyone instead of "record levels of homeless and massive construction with empty properties at the end."

For wealthy Chinese investors, more taxes may be just another cost to take into account. With a two-bedroom apartment in Sydney and Melbourne costing 25 percent less than in Shanghai, according to Credit Suisse, Chinese have found Australia to be among the world’s attractive places to park cash as their home currency was declining and as they sought to diversify wealth overseas.

Leor Wong, a director of Melbourne-based Australia Property Group Investment (APG), who has been selling Australian properties to Chinese investors for 11 years, cites one friend who leaves his A$1 million holiday apartment empty, apart from a month or so a year when he visits with family and friends. “I don’t think he’d mind this tax,” Wong said.

But Liu Yumei, a 52-year-old restaurant owner in Suzhou, China, is rethinking her plans. Her A$290,000 two-bedroom Melbourne apartment has been empty since 2013, other than for a brief family holiday. Citing the risk of it getting “messy and old,’’ Liu said fears about damage stopped her from renting out the apartment, which was bought in anticipation of her son eventually living there during his university years.

The new vacancy tax for her unit would exceed $2,200 a year -- enough to cause her to look into renters or AirBnB. "Some friends are educating me that rental income could be high in Australia and I shouldn’t miss it," said Liu, who has friends in Melbourne to help with arranging AirBnB stays. 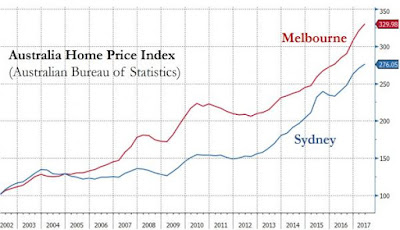 But despite public sentiment to the contrary, it’s unclear how much foreign buying contributes to rising property prices. A recent government paper concluded foreign money can be blamed for no more than A$122 of a quarterly price increase of A$12,800 over the five-year period it studied.

Tighter capital controls in China, along with Australian banks’ decision to stop lending to offshore buyers combined with the effect of the stamp duties and other taxes may also soon start to bite -- if they haven’t already. Research from the Reserve Bank of Australia published Thursday concluded that alternative financing for foreign buyers remains limited.


Wong says revenue from property sales has fallen 60 percent over the past year, and that APG has quadrupled its rental business to bridge the gap, including from the Docklands. “You have to go defensive," Wong said. "Right now rental business is something brokers have to pound on."
Posted by Hla Oo at 2:33 AM