Over 20,000 Young Muslim Girls Married Off Every Day 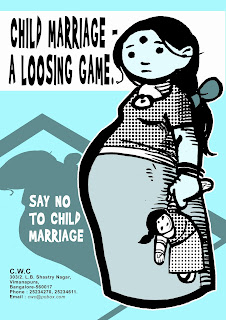 LONDON (Thomson Reuters Foundation) - At least 20,000 girls around the world are married off illegally each day, with child marriage often deeply rooted in Islamic tradition despite being outlawed in a growing number of countries, according to new analysis released on Wednesday.

About 7.5 million girls become child brides every year in countries where early marriage is banned, the World Bank and global charity Save the Children said in a report. More than a fifth are in West and Central Africa, where 1.7 million illegal child marriages occur each year, the highest rates in the world, the report said.

The figures show the challenges in enforcing anti-child marriage laws, since the practice can often be entrenched in community traditions and religious customs, the report said. “Laws banning the practice are an important first step. But millions of vulnerable girls will continue to be at risk unless child marriage is tackled head on,” Helle Thorning-Schmidt, head of Save the Children, said in a statement.


“We need to change attitudes in communities so that we can end this harmful practice once and for all.” Early marriage not only deprives girls of education and opportunities, but also increases the risk of death or serious childbirth injuries if they have babies before their bodies are ready. Child brides are also at greater risk of domestic and sexual violence.

Poverty is often the driving force behind child marriage. Parents may marry girls off so they have one less mouth to feed and in Africa will receive a “bride price” for the girl. Some communities also see child marriage as a way of protecting girls from having premarital sex.

The World Bank in June said ending child marriage would reduce population growth, boost girls’ educational achievements and increase their earnings. “When a girl gets married too young, her role as a wife and a mother takes over. She is more likely to leave school, she may become pregnant and suffer abuse,” said Thorning-Schmidt.

Around the world, nearly 100 million girls do not have laws protecting them from being married, the report added. Worldwide, 15 million girls are married off as children every year - millions of them without breaking any law.

India's Supreme Court ruled Wednesday that sex with an underage wife constitutes rape, in a landmark ruling that campaigners say could affect millions of girls. The decision overturned a previous clause that permitted men to have sex with a married girl as young as 15, the Indian Express reports.

India's age of consent is 18 and child marriage is illegal, but the practice persists in many parts of the country. According to Girls Not Brides — a coalition of NGOs working to end child marriage — 47% of Indian girls are married by the age of 18.

Marital rape is not recognized as a crime in India, but sex with a child under 18 is considered rape. Under the new ruling, girls who are raped by their husbands can bring charges within one year of the offense.

The ruling was praised by rights advocates, who noted it coincided with International Day of the Girl Child on Oct. 11. “The judgment is a step forward in protecting girls from abuse and exploitation, irrespective of their marital status,” Divya Srinivasan of gender-equality group Equality Now told Reuters.

Others raised concerns about the difficulty of enforcing the new provision, particularly in India's conservative rural areas where child marriage persists due to poverty, low education, patriarchal social values and weak law enforcement, according to UNICEF.

"A minor girl who is already married, almost always with the consent of her parents, will not usually have the courage to go to the police or court and file a case against her husband," said the BBC's Geeta Pandey.In 2015, there were more than 34,000 rape cases reported in the country, according to India's National Crime Records Bureau.


Domestic abuse is even more widespread, affecting 40% of married women between the ages of 15 and 49, and 70% of child brides, according to government statistics cited by Reuters.

(From BNI: But the Indian Muslim clerics lose their little minds after Supreme Court declares that intercourse with a minor wife under 18 will now be considered “rape”. Muslims go ballistic, and likely will ignore the law. After all, their paedophile prophet Mohammed married a six year old and had intercourse with her when she was nine.) 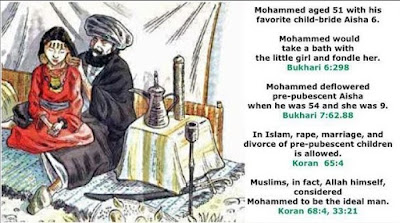