(David Chazan’s articledirect from The TELEGRAPH UK on 01 October 2017.)

The two victims were aged 17 and 20, police said. ISIS claimed responsibility for the attack, according to the group's Amaq news agency. The attacker, reportedly aged about 20, was armed with two butcher’s knives, police said. He was known to the authorities for theft, drug dealing and other crimes but had not been flagged as a potential terrorist.

Dominique, a tearful witness, described how he grabbed one of the women from behind and slit her throat. “She couldn’t have seen a thing,” she told CNews television. “She was lying in a pool of blood as I ran away. I heard two shots fired. It must have been the soldiers.”


Police were questioning about 10 witnesses to the attack last night. A terrorism investigation was opened after security services reviewed CCTV footage of the attack. It showed the assailant sitting on a bench shortly before he killed one woman. He then fled but turned back to attack the second victim before running towards soldiers who were rushing to the scene. They shot him twice just outside the station.

Gérard Collomb, the interior minister, who travelled to Marseille hours after the attack, described it as “an odious act”. He told journalists outside the station: “This could be of a terrorist nature, but we cannot confirm it fully at this stage.”

However, Mr Collomb confirmed that several witnesses heard the attacker shouting “Allahu Akbar” and an interior ministry spokesman said: “The terrorist theory is the most likely at this stage but we are exploring all possibilities.”

The mayor of Marseille, Jean-Claude Gaudin, said: “I think it was a terrorist attack and the individual who was killed seems to have had several identities.” Police who checked the man’s fingerprints found several aliases, a security source said.

Samia Ghali, a local senator, urged the public to be vigilant against attacks. “At any time, in any place, the threat may return.” More than 200 police evacuated and sealed off Saint-Charles station. Trains serving the Mediterranean port city were suspended for much of the day.

President Emmanuel Macron said he was “deeply outraged by this barbaric act”. He congratulated the soldiers who “reacted with calmness and efficiency” and said he shared the pain of the victim’s families and friends.

The soldiers were patrolling Saint Charles station as part of Operation Sentinelle, in which 7,000 troops patrol French streets and guard potential targets such as synagogues, museums, schools, mosques and stations in the army’s largest post-war military operation in mainland France.

France has been hit by a string of terrorist attacks, most of which have been claimed by the Islamic State. The security forces themselves have been targeted repeatedly. A man who had pledged allegiance to Isil stabbed a policeman to death outside his home and killed his partner in their living room last year.


France remains under a state of emergency declared after the Paris attacks in November 2015. The government extended Operation Sentinelle earlier this month. Parliament is to vote on a bill next week that would make permanent many of the emergency powers given to police to detain suspects and carry out surveillance. Two American college students were injured in an acid attack at the train station last month. Police said it was not a terrorist assault. 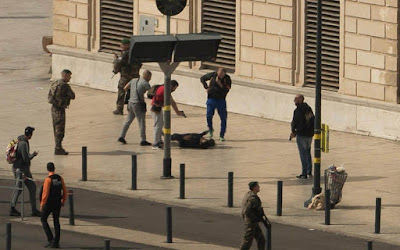 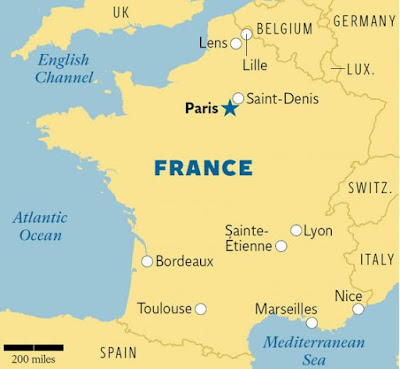 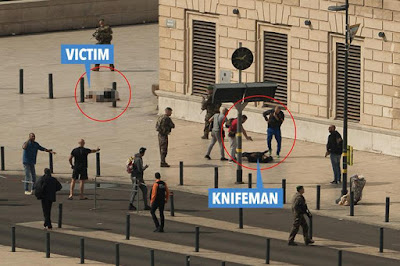