(Julius Strauss’s article from The TELEGRAPH UK on 23 December2013.) 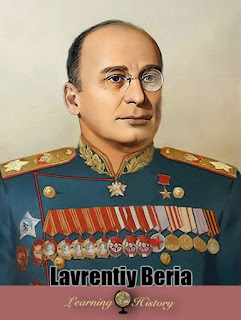 Stalin's depraved executioner still has grip on Moscow: Lavrenty Beria was responsible for the death of millions of Russians but is now a morbid sideshow, writes Julius Strauss in Moscow.

In the oak-panelled office where he plotted his victims' fate, a small fire still glows just as it did when he was alive. In the room where he raped countless young women, the huge bed has been changed for a smaller one but the other furniture remains. Down in the sprawling cellars, the bones of his victims are still hidden behind false walls or cemented into the masonry.

The latest grisly find - a large thigh bone and some smaller leg bones - was only two years ago when a kitchen was re-tiled. It was 50 years ago today that Lavrenty Beria, Stalin's depraved and blood-thirsty executioner, was shot in secret by a firing squad.

In 15 years as head of the secret police, the NKVD, he was responsible for overseeing the murder of millions of Russians, some shot at night in the depths of the Lubyanka, others dragged off to the gulags.


For decades after he was shot, any mention of Beria was expunged from official Soviet histories. Unlike Stalin, who was buried in Lenin's Mausoleum and later moved to a grave by the Kremlin walls, his body was burnt and his ashes dispersed by a huge fan.

Now, half a century after his death, interest in the man is enjoying a quiet, morbid renaissance. His sick mind and warped ways still hold the power to captivate. In the last two years Russian television has made two films about the secret policeman, one of which was shown at the weekend.

A steady stream of diplomats and officials, fuelled by macabre curiosity, have beaten a path to the Tunisian Embassy, which is housed in the building where Beria lived. "In the old days visitors were too frightened to even utter his name," said Mohamed Bellagi, the ambassador. "But now whenever I invite Russian officials here they all talk about him. They all want to see how he lived."

Of all the brutal killers to emerge from the 20th century, Beria, a Georgian like his master, was one of the most malign. Anton Antonov-Ovseyenko, a historian, who spent 13 years in the camps and later wrote a book about Beria, said: "The gulags existed before Beria, but he was the one who built them on a mass scale. He industrialised the gulag system. Human life had no value for him."

He was also deeply depraved and a notorious sexual predator. At night he would cruise the streets of Moscow seeking out teenage girls. When he saw one who took his fancy he would have his guards deliver her to his house.

Mr Antonov-Ovseyenko said: "Sometimes he would have his henchmen bring five, six or seven girls to him. He would make them strip, except for their shoes, and then force them into a circle on their hands and knees with their heads together. "He would walk around in his dressing gown inspecting them. Then he would pull one out by her leg and haul her off to rape her. He called it the flower game."

Even fellow senior Communists, many of them mass murderers in their own right, had nothing good to say about Beria. They described him as slippery and obsequious in front of his superiors, brutal and cunning behind their backs.

He reportedly won Stalin's favour in the early 1930s after faking a conspiracy to assassinate the Soviet leader that he then claimed to have foiled. In 1938 Stalin rewarded Beria's dog-like loyalty by making him head of the NKVD. One account says Beria personally strangled his predecessor, Nikolai Yezhov.

When Stalin died in 1953, Beria made a bid for power but was outmanoeuvred by Nikita Khrushchev, who feared and loathed him. Khrushchev had him arrested, charged with spying for Britain and shot.

Today, the sprawling sky-blue and white house where Beria lived - home to the Tunisian embassy since 1958 - is much as he left it. The ambassador said: "The sofa that you're sitting on is where he used to come and drink a glass of cognac after he had finished with a girl."

In the basement, Anil, an Indian who has worked at the embassy for 17 years, showed a plastic bag of human bones he had found in the cellars. An iron door with two huge, flat, metal bolts marks the entrance to one of Beria's torture chambers. Some say evil still hangs over the house like a shroud.

On 26 June 1953, Beria was arrested and held in an undisclosed location near Moscow. Accounts of Beria's fall vary considerably. By the most likely account, Khrushchev prepared an elaborate ambush, convening a meeting of the Presidium on 26 June, where he suddenly launched a scathing attack on Beria, accusing him of being a traitor and spy in the pay of British intelligence.

Beria was taken completely by surprise. He asked, "What's going on, Nikita Sergeyevich? Why are you picking fleas in my trousers?" Molotov and others quickly spoke against Beria one after the other, followed by a motion by Khrushchev for his instant dismissal.

When Beria finally realized what was happening and plaintively appealed to Malenkov to speak for him, his old friend and crony silently hung his head and refused to meet his gaze. Malenkov pressed a button on his desk as the pre-arranged signal to Marshal Georgy Zhukov and a group of armed officers in a nearby room. They burst in and arrested Beria.

Beria was taken first to the Moscow Guardhouse and then here, to the bunker of the headquarters of Moscow Military District. Defence Minister Nikolai Bulganin ordered the Kantemirovskaya Tank Division and Tamanskaya Motor Rifle Division to move into Moscow to prevent security forces loyal to Beria from rescuing him.

Many of Beria's subordinates, proteges and associates were also arrested, among them Merkulov, Bogdan Kobulov, Sergey Golgidze, Vladimir Dekanozov, Pavel Meshik, and Lev Vlodzimirskiy. Pravda did not announce Beria's arrest until 10 July, crediting it to Malenkov and referring to Beria's "criminal activities against the Party and the State."

In December, the paper announced that Beria and the six accomplices mentioned, "in the pay of foreign intelligence agencies," had been "conspiring for many years to seize power in the Soviet Union and restore capitalism."

Beria and the others were tried by a special session ("Spetsialnoye Sudebnoye Prisutstvie") of the Supreme Court of the Soviet Union on 23 December 1953 with no defense counsel and no right of appeal. Marshal Ivan Konev was the chairman of the court.

Beria was found guilty of Treason. It was alleged, without any proof, that "up to the moment of his arrest Beria maintained and developed his secret connections with foreign intelligence services". In particular, attempts to initiate peace talks with Hitler in 1941 through the ambassador of Bulgaria were classified as treason; no one mentioned that Beria was acting on the orders of Stalin and Molotov.

It was also alleged that Beria, who in 1942 helped organize the defense of the North Caucasus, tried to let the Germans occupy the Caucasus. There were allegations that "planning to seize power, Beria tried to obtain the support of imperialist states at the price of violation of territorial integrity of the Soviet Union and transfer of parts of USSR's territory to capitalist states."

These allegations were due to Beria's suggestion to his assistants that to improve foreign relations it was reasonable to transfer the Kaliningrad Oblast to Germany, part of Karelia to Finland, the Moldavian Soviet Socialist Republic to Romania and the Kuril Islands to Japan.

Beria's participation in the Purge of the Red Army in 1941 was classified as an act of terrorism. Counter-revolutionary activity during the Russian Civil War. In 1919 Beria worked in the security service of the Azerbaijan Democratic Republic. Beria maintained that he was assigned to that work by the Hummet party ,which subsequently merged with the Adalat Party, the Ahrar Party, and the Baku Bolsheviks to establish the Azerbaijan Communist Party.

Beria and all the other defendants were sentenced to death. When the death sentence was passed, according to Moskalenko's later account, Beria pleaded on his knees for mercy before collapsing to the floor and wailing and crying energetically, but to no avail.

The other six defendants were executed by firing squad on 23 December 1953, the same day as the trial, while Beria was fatally shot through the forehead by General Batitsky after the latter stuffed a rag into Beria's mouth to silence his bawling. The body of Lavrentiy Pavlovich Beria was subsequently burned and ashes dispersed into air by an industrial fan.