(Dave Boyer’s article from The WASHINGTON TIMES on 25 January 2019.) 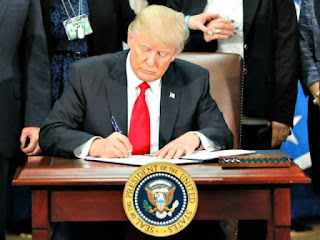 The president signed the measure behind closed doors at the White House to reopen the government until Feb. 15. The House and Senate approved the legislation earlier in the day. The move ends the partial shutdown that began on Dec. 22, and will allow 800,000 federal employees to receive paychecks again plus back pay.

The deal, which calls for House and Senate negotiators to hash out funding for the Homeland Security department and possibly for a border barrier, is essentially the same agreement that Mr. Trump had rejected early in the shutdown. But he backed off his demand for $5.7 billion for a wall Friday as air travel became snarled due to a shortage of air-traffic controllers.


The president said he made no “concessions” and was acting out of consideration for “millions of people who were getting badly hurt” by the shutdown.

The White House sent a statement notifying reporters that the bill had been signed by the president. No press was present for the bill signing, which ended the 35-day partial government shutdown – the longest in history. Earlier in the evening, House Speaker Nancy Pelosi signed the bill with eight pens in a public ceremony and gave the pens as souvenirs to her House Democratic colleagues.

The hastily passed bill will fully fund the government for three weeks and provide retroactive pay for federal government employees. On Twitter, the president defended his decision to back down from his demands for border wall funding before he would sign a bill to fund the government.

“This was in no way a concession,” he wrote. “It was taking care of millions of people who were getting badly hurt by the Shutdown with the understanding that in 21 days if no deal is done, it’s off to the races!”

Congress has three weeks to come up with a plan to fund border security, as a bi-partisan committee was formed in the Senate on Friday to come up with a compromise. White House Press Secretary Sarah Sanders also defended the president on Twitter.

“In 21 days President Donald Trump is moving forward building the wall with or without the Democrats,” she wrote. “The only outstanding question is whether the Democrats want something or nothing.”

The president warned Congress Friday that if they failed to reach a compromise, he would declare a State of Emergency on the Southern border, allowing him the flexibility to fund border barriers using executive authority.

“I think we have a good chance,” Trump told reporters at the White House. “We’ll work with the Democrats and negotiate and if we can’t do that, then obviously we’ll do the emergency because that’s what it is. It’s a national emergency.”

Schumer: “President Has Learned His Lesson” 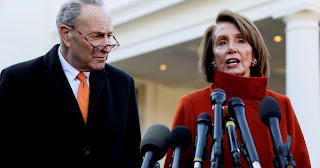 Senate Minority Leader Chuck Schumer took a victory lap after President Trump reopened the federal government to 800K employees. Schumer introduced Rep. Nancy Pelosi as Speaker for the new House of Representatives, but he also decided to spike the football after many felt Trump caved by not getting border security funding but giving in to the Democrats demands.

Schumer and Pelosi both continue to speak about hold discussions on border security but both are still against funding the wall. “The American people do not like it when you throw a wrench into the lives of government workers over an unrelated political dispute. Working people throughout America empathized with the federal workers and were aghast at what the president was doing to them. Hopefully now the president has learned his lesson,”

“Now, once the president signs the continuing resolution, we in Congress will roll up our sleeves and try to find some agreement on border security,” he continued, adding they are still against using money for a border wall.

“Today the president will sign the bill to reopen the government along the outlines of what we have proposed and hopefully it means a lesson learned for the White House and for many of our Republican colleagues: Shutting down the government over a policy difference is self-defeating. It accomplishes nothing but pain and suffering for the country and incurs an enormous political cost to the party shutting it down.”