Impeach The Motherfucker & Tax The Rich 70% 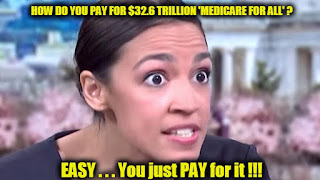 Speaking with Anderson Cooper in a “60 Minutes” interview scheduled to air Sunday, Ocasio-Cortez said a dramatic increase in taxes could support her “Green New Deal” goal of eliminating the use of fossil fuels within 12 years — a goal she acknowledges is ambitious.

“What is the problem with trying to push our technological capacities to the furthest extent possible?” Ocasio-Cortez asked. “There’s an element where yeah, people are going to have to start paying their fair share in taxes.”


Ocasio-Cortez pointed out that in a progressive tax rate system, not all income for a high earner is taxed at such a high rate. Rather, rates increase on each additional level of income, with dramatic increases on especially high earnings, such as $10 million.

When Cooper pointed out such a tax plan would be a “radical” move, Ocasio-Cortez embraced the label, arguing the most influential historical figures, from Abraham Lincoln to Franklin D. Roosevelt, were called radical for their agendas as well. “I think that it only has ever been radicals that have changed this country,” Ocasio-Cortez said. “Yeah, if that’s what radical means, call me a radical.” 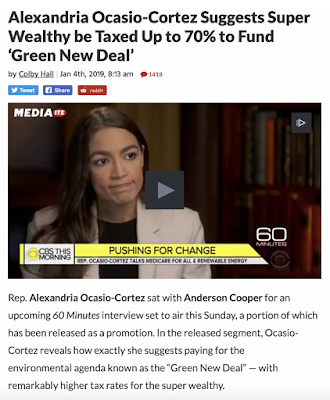 House Democrats are furious that an incoming freshman’s expletive-riddled statement about impeaching Donald Trump has suddenly upended their carefully crafted rhetoric on their plans to take on the president.

Speaker Nancy Pelosi and other top Democrats have long argued that impeachment is a last resort that would come at the end of exhaustive oversight and investigations. But on the second day of the new Congress, the news was jammed with talk of Rep. Rashida Tlaib of Michigan, a Palestinian-Muslim, who told a crowd of progressive activists Thursday night that “we’re gonna impeach the motherfucker.”

Rank-and-file Democrats, immediately fearful of the damage the comment could cause, unloaded on their new colleague Friday morning. Republicans, they argued, would hold it up as proof that Democrats are playing politics rather than pursuing genuine oversight of the president — even if the GOP never showed interest in investigating Trump scandals while it was in power. 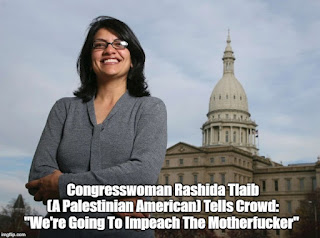 “Mueller hasn’t even produced his report yet!” said Rep. Ron Kind (D-Wis.), referring to special counsel Robert Mueller’s Russia probe. “People should cool their jets a little bit, let the prosecutors do their job and finish the investigation. “Inappropriate,” added Rep. Jim Costa (D-Calif.). “As elected officials I think we should be expected to set a high bar… It’s not helpful.”

Even Rep. Brad Sherman (D-Calif.), who introduced an impeachment resolution earlier this week, was shocked. His eyes bulged in disbelief when a reporter read him Tlaib’s comments and he was speechless for several seconds.

After he regained his composure, Sherman said that kind of language is detrimental to the cause: “That’s not language I would use … I think the office of the presidency should be treated with respect.”

“You can’t accomplish very much of anything unless you have civility and show respect for your colleagues,” Cummings said. “Those kind of comments do not take us in the right direction.” Pelosi said while she didn’t agree with the language, she also didn’t think anyone “should make a big deal” about the expletive, noting the president is also known for having a foul mouth sometimes.

“I'm not in the censorship business. I don't like that language, I wouldn't use that language, but I wouldn't establish language standards for my colleagues,” Pelosi said during an MSNBC town hall Friday morning. She added that impeachment is “very divisive“ and shouldn’t be taken “without the facts.”

Tlaib refused to apologize for the comments during an interview with a Michigan TV station later on Friday, saying that the tenor of her language was just how people in Detroit talk. "I am very passionate, and I grew up in an incredibly beautiful, urban community — the city of Detroit — born and raised. We say colorful things in interesting ways, but I tell you, the president of the United States is my focus. The residents back home are my focus."

Meanwhile, Republicans were already seizing on the comment to accuse Democrats of showing their true goal — removing Trump from office. Fox News, Trump’s TV network of choice, played the video of Tlaib’s comments over and over Friday morning. And Republicans were positively salivating at the notion of using the clip to repel accusations from House Democrats in any future impeachment fight.

House Minority Leader Kevin McCarthy (R-Calif.) launched into an attack on both Pelosi and Tlaib for the episode, calling on the new speaker to get Tlaib in line. "[Pelosi] is the speaker of the House. She is also the head of the Democratic Party. She has a new freshman who uses that type of language, who has a determination what she's gonna do with no facts or no basis," McCarthy told reporters at an impromptu press conference just off the House floor.

"How do you work with anybody if this is what they really have planned?" McCarthy shrugged off questions about Trump's own long history of incendiary language, saying "That action should not stand."

Trump’s political advisers have long claimed that talk of impeachment works more to the president’s advantage, pointing to public opinion polls showing voters oppose efforts to impeach Trump despite wanting Congress to be more of a check on him.

Trump seized on the issue in a series of tweets Friday morning that reflected the precise message his team has already used — that pushing to remove Trump without evidence of wrongdoing would be perceived by voters as an attempt to undo his victory and prevent him from securing another win in 2020.

“How do you impeach a president who has won perhaps the greatest election of all time, done nothing wrong (no Collusion with Russia, it was the Dems that Colluded), had the most successful first two years of any president, and is the most popular Republican in party history 93%?” Trump wrote on Twitter. At a news conference later Friday, Trump called Tlaib‘s comments “disgraceful” and “a great dishonor to her and to her family.”

Tlaib would not answer reporters’ shouted questions Friday morning as she exited a closed-door caucus meeting. But her office didn’t back down on her remarks in a tweeted statement Friday. “Congresswoman Tlaib was elected to shake up Washington, not continue the status quo,” the statement said. “Donald Trump is completely unfit to serve as president. The congresswoman absolutely believes he needs to be impeached.”