(Charles Petrie’s article from The WASHINGTON POST on 11 January 2019.)

The verdict is in: Aung San Suu Kyi is an authoritarian: A Myanmar court has rejected the appeal of two Reuters journalists jailed for exposing crimes committed by the country’s military against the Rohingya.

No better proof could be needed of the extent to which authoritarianism has once again returned to Myanmar. This anti-democratic resurgence has an unlikely source: the Nobel Peace Prize laureate once reflexively referred to as a democracy "icon.”

It is increasingly apparent that the Myanmar military and its leader share with the de facto President Aung San Suu Kyi a similar vision for the future of the country. It is an age-old vision of domination by a nationalist Buddhist elite, who have difficulty accommodating any form of dissent, and demonstrate very little regard for the aspirations of the other ethnic groups with whom they should be negotiating an end to decades of armed conflict.

As a result, the hopes for democracy and peace in Myanmar are steadily unraveling — and the conditions for any quick return of the Rohingya increasingly becoming elusive. The main differences between the commander in chief of the armed forces, Senior General Min Aung Hlaing, and Aung San Suu Kyi, also known as “the Lady,” appear to have less to do with ideology than their desire for power.


And though Aung San Suu Kyi seems committed to some form of parliamentary governance, her approach has strikingly authoritarian traits. Members of parliament from her party, the National League for Democracy, are held on a very tight leash. The repressive apparatus of the state, put in place by the British and refined by the former military regime, is now used by her government to intimidate and suppress dissenting voices.

A recently published civil society report found that since the 2015 elections (which the Lady’s party won), 139 journalists and civil society activists have been arrested, as compared to 11 in the preceding five years. Increasingly, the Myanmar of today resembles that which I knew when serving as the United Nations representative during the dark ages of the junta.

The peace process is now being held hostage to a broader confrontation between the Lady and the senior general. Both are increasingly focusing their attention on the 2020 elections. Aung San Suu Kyi needs to demonstrate before then her ability to get as many of the 21 insurgencies, known collectively as the ethnic armed organizations, to sign a nationwide cease-fire agreement (NCA); the military wants to prove that she can’t.

And although both recognize the importance of peace for the country’s socioeconomic prosperity (much of Myanmar’s natural wealth lies in the contested areas), neither is genuinely interested in reaching out to the ethnic armed organizations, or any other ethnic leaders in any significant way.

Min Aung Hlaing, the army chief, insists that the ethnic groups should commit to not seceding and accept one Myanmar army before negotiations can even begin. Needless to say, such demands preclude any constructive dialogue. The NCA contains within it a commitment to establish “a union based upon the principles of democracy and federalism.”

In the meantime, legislation on land ownership and the management of natural resources — which does not recognize the right of return of hundreds of thousands of ethnic villagers displaced from their ancestral lands because of the decades of conflict — is being passed through parliament without the involvement of those most directly concerned, namely the ethnic armed organizations and other ethnic leaders.

In her defense, it is possible that Aung San Suu Kyi is under pressure from her base among the Buddhist Bamar majority. Forces hostile to her are being mobilized through the Ma Ba Tha, the extremist Buddhist network. Alliances against her are being formed with the political party of the former regime.

Thus, even if she were sympathetic to the demands of the ethnic armed organizations (which is a big if), it is possible that Aung San Suu Kyi may not have as much freedom to accommodate them. Similarly, there is little real political incentive to resolve the Rohingya crisis.

Ominously, the Lady is using the cessation of fighting that the cease-fires — in place since 2012 due to the previous government — have brought to the southeastern parts of the country to extend the central government’s presence into ethnic administered areas.

This is done through the provision of central government services while simultaneously denying international support to existing ethnic administrations. The Myanmar military, for its part, is reinforcing its positions in the same southeast areas to the point of provocation. None of this is conducive to the trust needed for any sort of genuine dialogue.

As someone who has witnessed so much of Myanmar’s recent past, I find it deeply saddening to watch an opportunity for a historic peace being missed, to understand the extent to which the conditions for the return of the Rohingya do not exist, and to have to accept that the Aung San Suu Kyi once so venerated by the world is no more.

(Charles Petrie, former U.N. assistant secretary general, just returned from Myanmar, where he has been involved in the peace process since 2012, and had served as the U.N. Resident and Humanitarian Coordinator from 2003 to 2007.)

YANGON (04 Nov 2007) — The United Nations envoy to Myanmar opened his second visit in recent weeks by meeting Saturday with the top U.N. diplomat in the country, whom the regime just said it wanted to expel.

Myanmar's military leaders gave foreign and U.N. diplomats a note Friday that said they would not continue U.N. Resident Coordinator Charles Petrie's assignment in the country. That was seen as a response to Petrie saying last month that the junta's failure to meet the economic and humanitarian needs of its people caused September's mass pro-democracy protests, which were violently put down by the government.

U.N. envoy Ibrahim Gambari saw Petrie after his arrival, according to a U.N. statement, and flew to the remote new capital of Naypyitaw, where government officials said he met with senior leaders of the junta. He was expected to address the junta's announcement that it would expel Petrie.

The military has said 10 people were killed in the crackdown on the demonstrations, but diplomats and dissidents say the death toll is much higher. Thousands of people were detained. Protests have largely died down, but Yangon residents said on Saturday they were unable to access the main Internet provider for the third straight day, while a second ISP controlled by the government provided slow and limited service.

It was not known which of the junta leaders would meet Gambari in Naypyitaw, a bunker-like seat of power 250 miles north of Yangon, or whether he would later be allowed to visit detained democracy icon Aung San Suu Kyi in Yangon.

Gambari was first dispatched to Myanmar immediately following the government crackdown, and he met with junta leader Senior Gen. Than Shwe and with Suu Kyi. Gambari has been on a six-nation Asian tour urging support from key countries for national reconciliation, a stepped-up transition to democracy, and the release of all detained demonstrators. 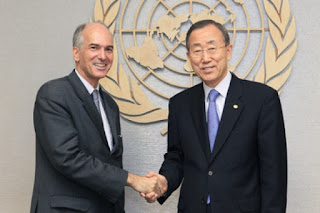 U.N. spokeswoman Michele Montas said Gambari would convey to Myanmar's military rulers the secretary-general's "very strong" support for the U.N. leadership in Myanmar, and sent a note for Gen. Than Shwe with Gambari. But little of substance has changed on Myanmar's political scene since Gambari's first visit, and analysts expect that little will result from Gambari's latest visit. "

It's a game. It's the only game in town, but it's a game," said David Steinberg, a Myanmar expert from Georgetown University who visited the country last month and met with government officials.

The United Nations has attempted to bring about reconciliation in the country for almost two decades. The junta has from time to time made minor concessions, such as allowing brief meetings with Suu Kyi, but continues to perpetuate its 45-year stranglehold on power.

Protest leaders who recently escaped to Thailand say some still look to the United Nations with hope, but others are deeply disillusioned that it has failed to be more forceful in dealing with the junta.

"The world seems to have accepted the lies of the (junta). This is a matter of life or death but so far the U.N. and the world has only come up with words," said Kar Kar Pancha, a Yangon businessman who fled to the Thai border.